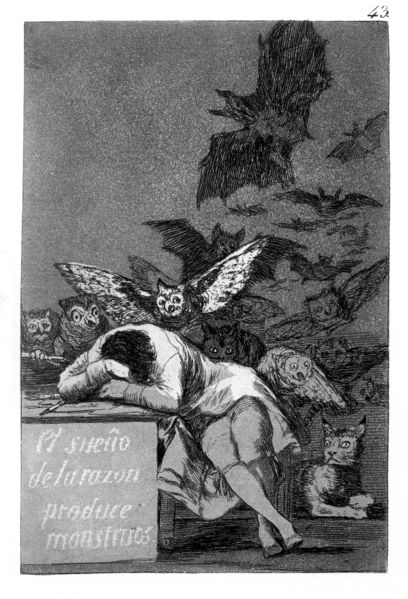 On March 30, 1746, Spanish romantic painter and printmaker Francisco José de Goya y Lucientes was born. He is regarded both as the last of the Old Masters and the first of the moderns. Goya was a court painter to the Spanish Crown, and through his works was both a commentator on and chronicler of his era. The subversive imaginative element in his art, as well as his bold handling of paint, provided a model for the work of later generations of artists.

“[T]here are no rules in painting and.. ..the oppression, or servile obligation, of making all study or follow the same path is a great impediment for the Young who profess this very difficult art that approaches the divine more than any other.”
– In a report, 1792 which Goya was invited to write to the Academy of San Fernando on the subject of teaching art

Francisco de Goya y Lucientes was born on March 30, 1746, in Fuendetodos, a village in northern Spain, as son of José Benito de Goya y Franque, a gilder, and Gracia de Lucientes y Salvador. The family moved to Zaragoza and at about age 14 Goya was apprenticed to Jose Luzan, a local painter. Later he went to Rome to continue his study of art and was able to win second prize in a painting competition organized by the City of Parma. On returning to Zaragoza in 1771, he painted frescoes for the local cathedral. These works, done in the decorative rococo tradition, established Goya’s artistic reputation, while his painting began to show signs of the delicate tonalities for which he became famous.

“But now? well now, now I have no fear of Witches, goblins, ghosts, thugs, Giants, ghouls, scallywags, etc, nor any sort of body.”
– Francisco de Goya, in a letter to his friend Don Martín Zapater, Feb. 1784;

From 1775 to 1792 Goya painted cartoons (designs) to be woven by the Royal Tapestry Factory in Madrid. This was the most important period in his artistic development. Actually, Goya designed some 42 patterns, many of which were used to decorate the bare stone walls of El Escorial [5] and the Palacio Real del Prado, the newly built residences of the Spanish monarchs near Madrid. As a tapestry designer, Goya did his first genre paintings, or scenes from everyday life. The experience helped him become a keen observer of human behavior. He was also influenced by neoclassicism, which was gaining favor over the rococo style. Meanwhile, Goya achieved his first popular success. In 1783, the Count of Floridablanca, a favourite of King Carlos III, commissioned Goya to paint his portrait. He also became friends with Crown Prince Don Luis, painting portraits of both the Infante and his family. Thus, he managed to become established as a portrait painter to the Spanish aristocracy and was elected to the Royal Academy of San Fernando in 1780, named painter to the king in 1786, and made a court painter in 1789 with a salary of 50,000 reales and 500 ducats for a coach. His portraits are notable for their refusal to flatter, and in the case of ‘Charles IV of Spain and His Family’, the lack of visual diplomacy even is remarkable, because it almost looks like a satire. 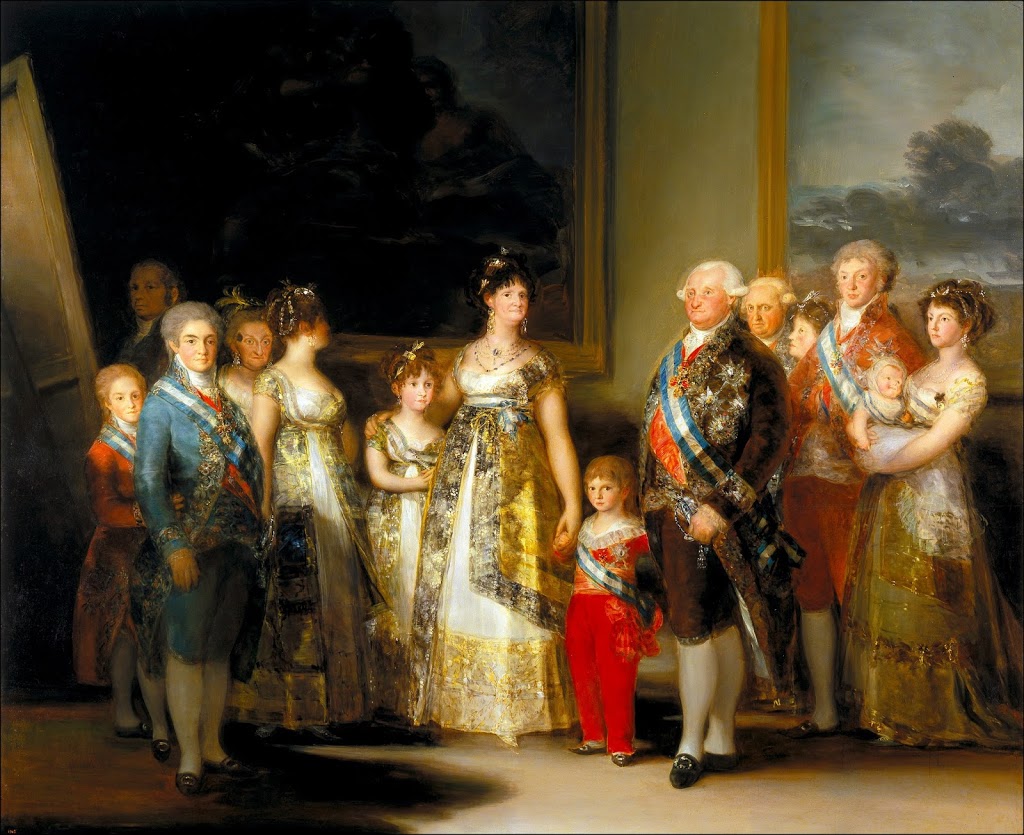 In the year 1792 Goya fell seriously ill, which led to a lifelong deafness. His alleged love affair with the Duchess of Alba, which he portrayed several times, led to speculations and the formation of legends, not least in the novel Goya by Lion Feuchtwanger (1951). However, only very few meaningful sources have survived on this subject. 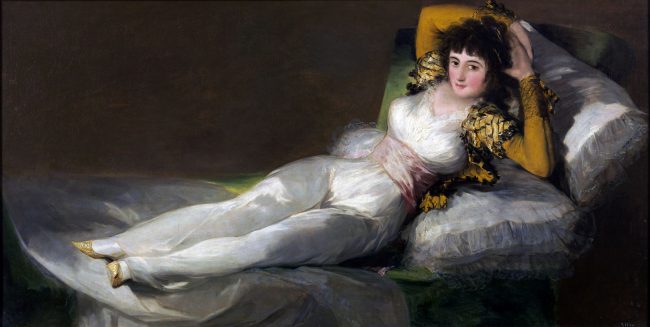 Isolated from others by his deafness, he became increasingly occupied with the fantasies and inventions of his imagination and with critical and satirical observations of mankind. During his recuperation, he undertook a series of experimental paintings, drawings as well as a bitter series of aquatinted etchings, published in 1799 under the title Caprichos. These prints were an artistic experiment and served as a medium for Goya’s condemnation of the universal follies and foolishness in the Spanish society in which he lived. His criticisms are far-ranging and acidic. He condemns the predominance of superstition, the ignorance and inabilities of the aristocracy and the clergy. The informal style, as well as the depiction of contemporary society found in Caprichos, makes them (and Goya himself) a precursor to the Modernist movement almost a century later. Especially ‘The Sleep of Reason Produces Monsters‘  in particular has attained an iconic status. 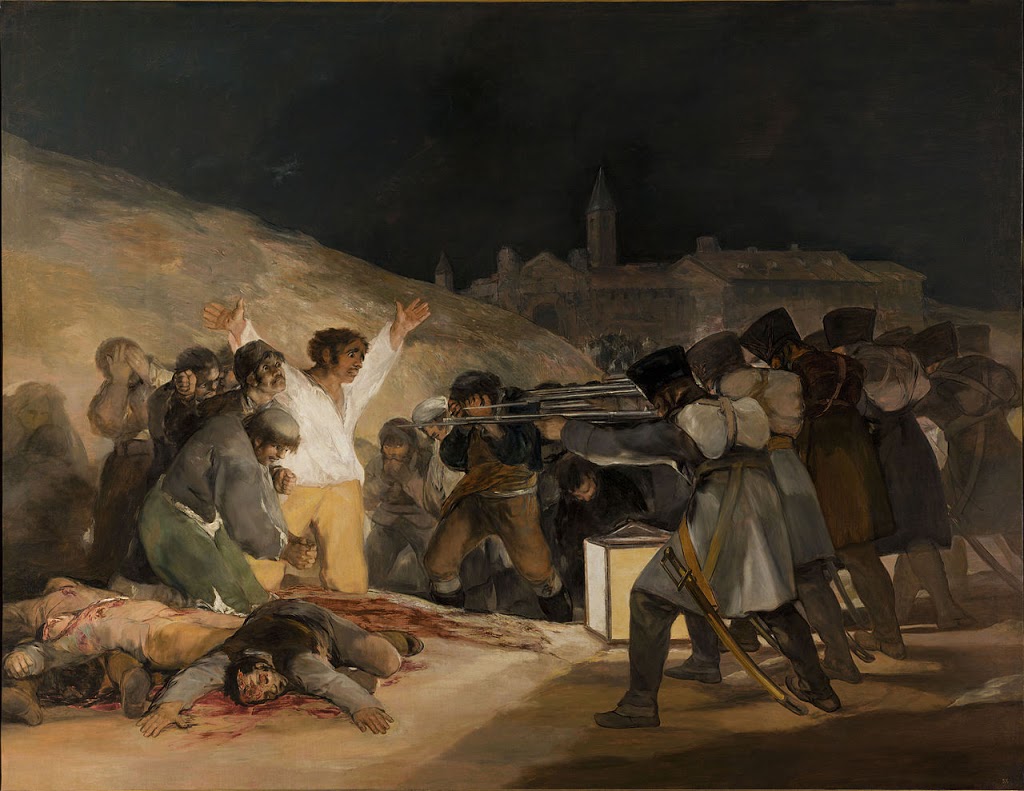 The Third of May and the Black Paintings

In 1814, Goya painted his most famous painting, ‘The Third of May‘. In it, soldiers are shooting innocent people, all men with the town’s Catholic Church behind them. This is based off a true event, when Napoleon had his soldiers come to Spain, and kill townsfolk, to try and force them to let him rule. Obviously, Goya was mentally and emotionally processing the war by painting. In the 1820s the famous Black Paintings followed with intense, haunting themes, which are considered the most outstanding works of his last years. In the beginning they were painted like fresco painting on the walls of the house where Goya was living in the outskirts of Madrid. In these pictures, Goya made frequent use of black, brown, and grey tones, demonstrating that his character became more and more dark and shady. Later in in 1873 these paintings were transferred from the walls to linen cloth.

At the age of 82, Goya died of a stroke in 1828 in his residence in Bordeaux accompanied by a few close friends. A few days before, at the bottom of one of his drawings, he wrote: “I am still learning“.