You are here: Home › economics › Ernst Engel and Engel’s Law of Microeconomics 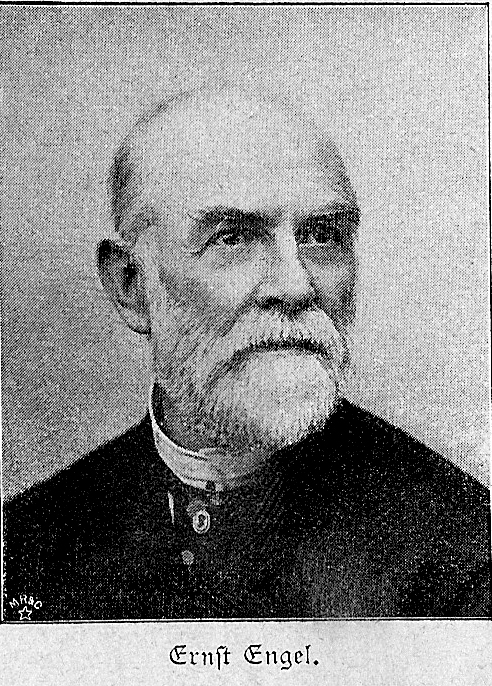 On March 26, 1821, German statistician Ernst Engel was born. Engel was head of the Prussian Statistical Bureau (1860-82) and is best known for the “Engel curve,” or Engel‘s law, which states that the proportion of expenditure on food will fall as income rises, i.e. food is a necessary good.

He who attempts to draw any conclusion whatever as to the nation’s wealth or poverty from the mere fact of a favorable or unfavorable Balance of Trade, has not grasped the first fundamental principle of Political Economy.”
— Ernst Engel, as quoted in [8]

Christian Lorenz Ernst Engel was born as the third eldest son of the wine merchant, cellar master and innkeeper George Bernhard Engel, who had his business in Dresden, Germany. His mother Christiane Rosine née Möbius was the daughter of the miller Johann August Möbius in Gauernitz near Meissen.[6] Ernst Engel studied at the Freiberg University of Mining and Technology, in Saxony, and on completing his curriculum traveled to England, France and Belgium. After the German revolutions of 1848 and 1849, Engel was attached to the royal commission in Saxony appointed to determine the relations between trade and labor.

At the Statistical Department

One year later, Engel was directed by the government to assist in the organization of the German Industrial Exhibition of Leipzig. He earned a good reputation and in 1854, he entered the government service as chief of the newly instituted statistical department. There, Engel earned himself a worldwide reputation and later raised to the rank of ‘Geheimer Regierungsrat’. As he did not succeed in implementing the reform of Saxon official statistics that he had planned, he resigned from his office in 1858 and became head of the Saxon Mortgage Insurance Company, which had been set up at his suggestion. He soon returned to statistics, however, by becoming director of the Prussian Statistical Bureau in 1860 as successor to Wilhelm Dieterici (until 1882).

Engel is one of the major organisers of official statistics in Germany. To him, statistics was “state description in general” and as such, on the one hand, an independent science, and on the other hand, a method in the service of all other sciences. He saw the basis of all statistical work in the methodical mass observation, which he carried out with regard to research, proof of causality, explanation and representation according to scientific procedures. He demanded from official statistics that they should extend equally to all branches of the administration. For this purpose he founded the “Prussian Central Statistical Commission” in 1860, which was to ensure a uniform co-operation of all branches of the state administration in conducting statistical surveys, and in 1862, following his office, a seminar on statistical training of administrative officials.[2] 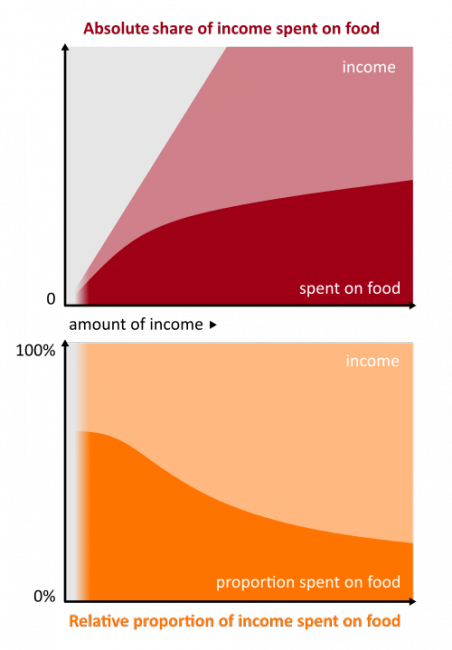 Engel’s law stats that as income rises, the proportion of income spent on food falls, even if actual expenditure on food rises.

Ernst Engel became most famous for Engel’s law. It describes an observation in economics and states that as income rises, the proportion of income spent on food falls, even if the actual expenditure on food rises. This further means that income elasticity of demand of food is between 0 and 1. One application of this statistic is treating it as a reflection of the living standard of a country. As this proportion or ‘Engel coefficient‘ increases, the country is by nature poorer, conversely a low Engel coefficient indicates a higher standard of living. It has the advantage over the commonly used prosperity indicator of gross domestic product that the local price level is automatically taken into account. Engel’s law is one of the best-proven empirical laws of economics.

From 1882 Engel retired to the Villa Engel in Serkowitz, now part of Radebeul, but continued his research. He was also Chairman of the Supervisory Board of the Neubrunn Waterworks and of the Lößnitz Embellishment Association. Ernst Engel died 1896 in Serkowitz at age 75.