You are here: Home › medical science › Emil von Behring and the Discovery of the Diphteria Antitoxin 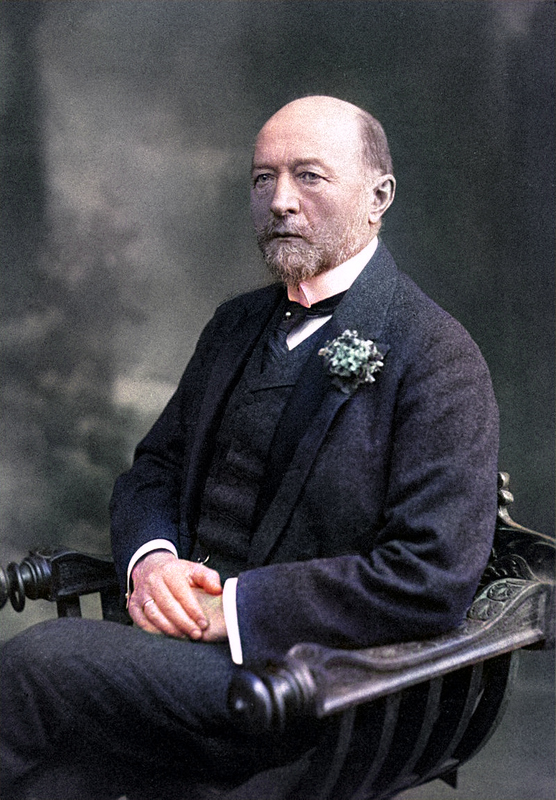 On March 15, 1854, german physiologist Emil von Behring was born. Von Behring received the 1901 Nobel Prize in Physiology or Medicine, the first one awarded, for his discovery of a diphtheria antitoxin. He was widely known as a “saviour of children“, as diphtheria used to be a major cause of child death. Von Behring is considered the founder of the science of immunology.

Behring was born “Adolf Emil Behring” in Hansdorf (now Ławice, Iława County), Province of Prussia, now Poland, as son of the teacher Georg August Behring and his second wife Augustine Zech. A scholarship from the Prussian state enabled him to complete his high school diploma. He attended the Army Medical College at Berlin starting from 1874. This meant on the one hand, that Behring’s education was financially practicable, however, he also had the obligation to remain in the military a few years after earning his degree. In 1878 he received his doctorate (Dr. med.) at the Friedrich-Wilhelms-University in Berlin with his dissertation Recent Observations on the Neurotomia opticociliaris. In 1880 he received his license as a doctor and was sent to Poland where he studied problems connected with septic diseases.

In the early 1880s, Emil von Behring performed investigations on iodoform and explained that while the compound does not actually kill the microbes, it possible neutralizes their poisons, being antitoxic. The military health department was especially interested in Behring’s works and sent him to the pharmacologist Carl Binz at Bonn for further training in experimental methods. In the same decade, Behring started to work as an assistant at the Institute of Hygiene under Robert Koch.[3] He also joined Koch when he moved to the Institute for Infectious Diseases. Emil von Behring became Professor of Hygiene at Halle in 1894 and later Marburg.

Emil von Behring is best known for his work on diphtheria and tuberculosis. In general, research on the matter probably dates back to Roux and Yersin, both working at the Pasteur Institute in Paris. They were able to show that certain filtrates of diphtheria cultures contained something they called a toxin and produced symptoms of diphtheria. In 1890, Brieger and Fraenkel created toxalbumin, a toxix substance from cultures of diphtheria bacilli. They were then injected in guinea pigs and thus, immunized to diphteria. Behring began his work on serum therapy in 1890 with the Japanese author Kitasato Shibasaburo, with whom he published the essay “On the Establishment of Diphtheria Immunity and Tetanus Immunity in animals“. The paper is considered the basis of serum therapy.

Behring intended to build on his work on iodoform and wanted to find out the consequences of injecting animals with material that had been treated with various disinfectants. The experiments were performed with tetanus bacilli and diphtheria, and let to the therapy of both diseases. Behring and Kitasato were able to show in 1890 that small doses of “sterilised brothcultures of diphtheria or of tetanus bacilli caused the animals to produce, in their blood, substances which could neutralize the toxins which these bacilli produced“. Further they were able to demonstrate that antitoxins produced by an animal could immunize other animals and even cure them. Their published work was confirmed soon and used by others.

The cooperation of his colleagues Paul Ehrlich [4] and Erich Wernicke made a decisive contribution to the development of an effective healing serum. The basic idea behind the blood serum therapy carried out by Behring and his Berlin colleagues is based on the assumption that it is possible to combat infectious pathogens with antitoxins rather than disinfecting chemicals – i. e. with anti-toxins produced by the body itself as part of the defence reaction. From a scientific point of view, the breakthrough was achieved at the beginning of 1894, when the diphtherapy serum was successfully used not only in Berlin’s hospitals, but also in Leipzig and other cities.

Von Behring is believed to have cheated Paul Ehrlich out of recognition and financial reward in relation to collaborative research in diphtheria. The two men developed a diphtheria serum by repeatedly injecting the deadly toxin into a horse. The serum was used effectively during an epidemic in Germany. A chemical company preparing to undertake commercial production and marketing of the diphtheria serum offered a contract to both men, but von Behring maneuvered to claim all the considerable financial rewards for himself. To add insult to injury, only Behring received the first Nobel Prize in Medicine, in 1901, for his contributions. Furthermore, he was raised to the nobility, and in 1903 he was elected to the Privy Council with the title of Excellency. Later followed further honorary memberships in Hungary and Russia, as well as orders and medals from Germany, Turkey and Rumania.