You are here: Home › politics › Elizabeth Montagu and the Famous Bluestocking Society 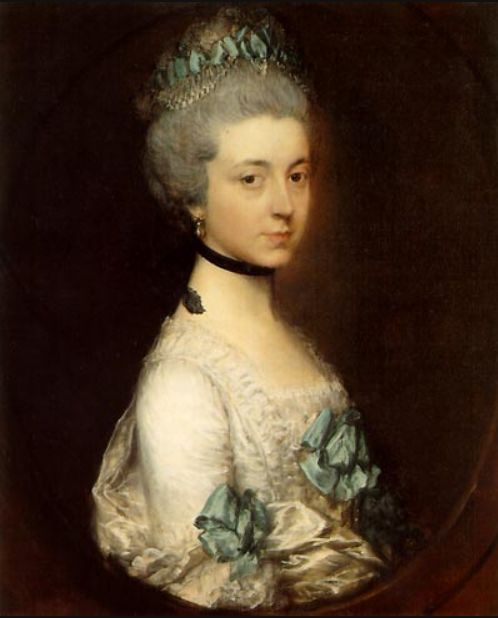 On August 25, 1800, British social reformer, patron of the arts, salonist, literary critic, and writer Elizabeth Montagu passed away. She was one of the wealthiest women of her era and one of the founders of the Bluestocking Society, an informal women’s social and educational movement in England in the mid-18th century.

“I never invite idiots into my house.”
– Elizabeth Montagu

Elizabeth Robinson was born as the eldest of three daughters (she also had a brother Matthew Robinson) of Matthew Robinson and Elizabeth Drake Robinson. Her grandfather was the Cambridge scholar Dr. Conyers Middleton, with whom she spent a lot of time with her sisters in her youth and received lessons in languages (Latin, Italian, French) and literature. Her sister Sarah Scott also later became a writer. She befriended Lady Margaret Harley in early years and spent a significant amount of time in her household, where important figures of the 1730s met and men and women were considered equal. She increased her interest in literature, when she began visiting her grandfather at Cambridge frequently, where he was occupied as the University’s Librarian [1,2].

In letters, Robinson sent to Harley in 1738, the young woman explained that she had no desire for marriage, as she saw marriage as expedient convention. However, in 1742, she married the rather wealthy and 28 years older Edward Montagu, who was a grandson of the first Earl of Sandwich and owned coal mines and estates in Northumberland, Yorkshire and Berkshire. It is assumed that both lived independent lives. Together, they had a son, who passed away in 1744. Following this event, Elizabeth Montagu became increasingly religious [1,3].

“I never invite Idiots into my House”

After Montagu had moved to London in 1850, she initiated so called ‘conversation parties’ and is believed to have said “I never invite idiots to my house” in this period. These events were soon called blue stockings and they turned into elaborate evenings where literature was discussed. Around 1770 Elizabeth Montagu’s blue stockings salon was one of the leading meeting places of its kind in London and established the term “Blue Stocking” for intellectual women in England. There you met George Lyttleton, Samuel Johnson,[4] Joshua Reynolds, Edmund Burke, David Garrick, Horace Walpole,[5] among others. In addition, a number of authors she patronized, such as Elizabeth Carter, Frances Burney, Sarah Fielding, Hannah More, and for example Samuel Johnson’s friend Hester Thrale.

She also began hosting events of this kind in Bath, where she lived at various times in several houses. She became one of the three leading literary or blue-stocking hostesses, together with Elizabeth Vesey and Frances Boscawen. Among the blue stockings, Elizabeth Montagu was not the dominant personality, but she was the woman of greatest means, and it was her house, purse, and power that made the society possible. As a literary critic, she was a fan of Samuel Richardson, both Fieldings (Henry Fielding [6] and Sarah Fielding), and Fanny Burney, and she was pleased to discover that Laurence Sterne was a distant relation. 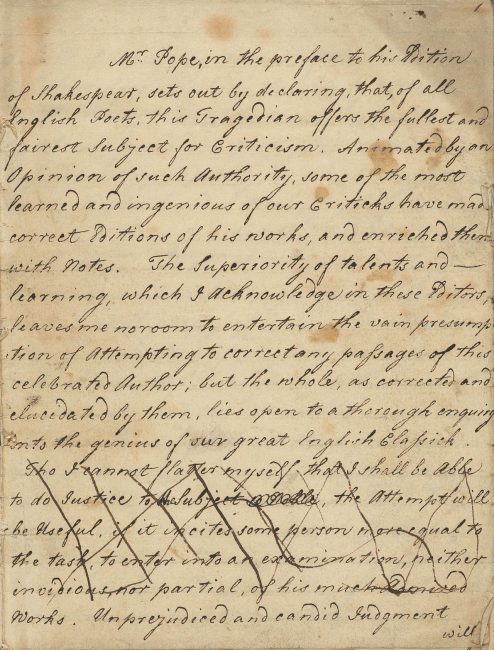 First page of a draft manuscript of An Essay on the Writings and Genius of Shakespear, 1769

Called the “Queen of the Blues”, Elizabeth Montagu led and hosted the Blue Stockings Society of England from about 1750. It was a loose organization of privileged women with an interest in education, but it waned in popularity at the end of the 18th century. It gathered to discuss literature, and also invited educated men to participate. Talk of politics was prohibited; literature and the arts were the main subjects. Many of the bluestocking women supported each other in intellectual endeavors such as reading, art work, and writing. Many also published literature.

Dr. Johnson once wrote about Montagu, that

“She diffuses more knowledge than any woman I know, or indeed, almost any man. Conversing with her, you may find variety in one“.

She anonymously contributed 3 dialogs to Lyttelton’s Dialogues of the Dead in 1760 and published her book ‘An Essay on the Writings and Genius of Shakespeare compared with the Greek and French Dramatic Poets, with some Remarks upon the Misrepresentations of Mons. de Voltaire‘ at the end of the 1760s. Her work was a great success and her reputation as an author grew significantly. Unfortunately, her husband died in 1775 and Elizabeth Montagu decided to take control of the families’ interest. Montagu was also a good businesswoman and increased her husband’s wealth. She built “Montagu House” in London on Portman Square and a “Montagu House” in Sandleford near Newbury, whose garden she had designed by Capability Brown. She died in her London home on 25. August 1800 and left her fortune to her late brother’s son Matthew Robinson, whom she had adopted [1]. A collection of Montagu’s letters was first published 1809 by her nephew and heir, Matthew Montagu, under the title, The Letters of Mrs. Elizabeth Montagu, with Some of the Letters of her Correspondents. The selection reflects a concern for Montagu’s moral reputation.