You are here: Home › women in science › Elizabeth Cabot Agassiz – Educator and Naturalist 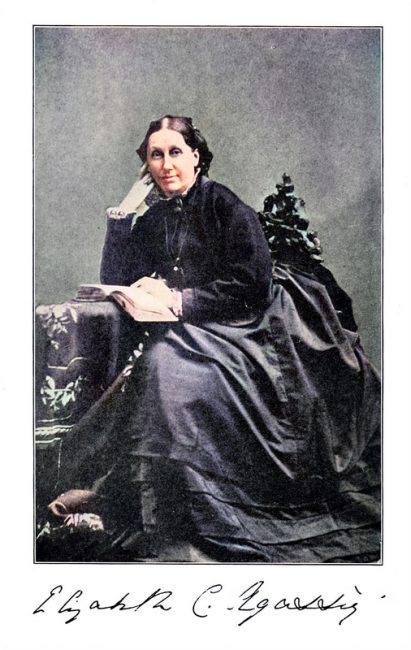 On December 5, 1822, American educator and naturalist Elizabeth Cabot Agassiz was born. A researcher of natural history, she was a contributing author to many scientific published works with her husband, Louis Agassiz.[4]

Elizabeth Cabot Aggasiz was born Elizabeth Cabot Cary into a Boston Brahmin family of New England ancestry. Her parents were Mary Ann Cushing Perkins Cary and Thomas Graves Cary, who was a graduate of Harvard University in 1811. Because of her fragile health, she was tutored at home, which included the study of languages, drawing, music, and reading. She additionally received informal history lessons from famous American educator Elizabeth Peabody.

Life and Research with Louis Agassiz

She started socializing with intellectuals after her sister got married to Harvard’s Professor Cornelius Conway Felton and met Louis Agassiz in 1846. Though they wanted to marry, he still had a wife and three children (Pauline, Ida and Alexander) in Switzerland. His wife died in 1848. In December 1849 – when socially acceptable to wed – Lizzie’s father gave his blessing. They married on April 25, 1850 in Boston, Massachusetts. She traveled with her husband and family to Charleston, South Carolina for his professorship in the medical school throughout the winters of 1851-1852 and 1852–1853. She also visited Europe with him in 1859. Also, the couple worked closely together in his fields of research. She accompanied Louis Agassiz as the main writer and record keeper during the Thayer Expedition to Brazil from 1865 to 1866 and the Hassler Expedition through the Strait of Magellan from 1871 to 1872. [1]

Next to their research, Elisabeth Cabot Agassiz supported female education and conducted a school for girls. This way, she was not only able to provide for her family, but also pioneered in the education for women. In 1856, in their home in Cambridge, Agassiz founded a school for girls from Boston. Her husband supported her by giving courses as well as arranging for courses from other Harvard professors. However, after her husband, Louis Agassiz passed away, Elizabeth devoted herself to the care of her grandchildren and writing a memoir of her husband, which was titled Louis Agassiz: His Life and Correspondence, published in 1885. Also, the women increased her interest in women’s education even further and became enthusiastic about the idea of a college for women taught by the faculty of Harvard University. In 1879, she helped to open the Harvard Annex in Cambridge and was appointed its president when it was incorporated as the Society for the Collegiate Instruction of Women. The institution was later renamed to Radcliffe College.[1,2]  From 1894 to 1900 this college was under her leadership and from 1900 to 1903 she was honorary president. With her tact and fundraising skills, she promoted the College and contributed greatly to its continuity.

During her lifetime, Elizabeth Cabot Agassiz published several works including A First Lesson in Natural History, published in 1859, Seaside Studies in Natural History, published in 1865, and A Journal in Brazil. During her studies, Agassiz was often assisted by her stepson Alexander Emanuel Agassiz. [1,3] She was (from 1869) one of the first female members of the American Philosophical Society (together with Mary Fairfax Somerville and Maria Mitchell)[5].

Elizabeth Cabot Agassiz died on June 27, 1907 in Arlington, Massachusetts of a cerebral hemorrhage at age 84.