You are here: Home › mathematics › Edward Kasner and how Google got its Name 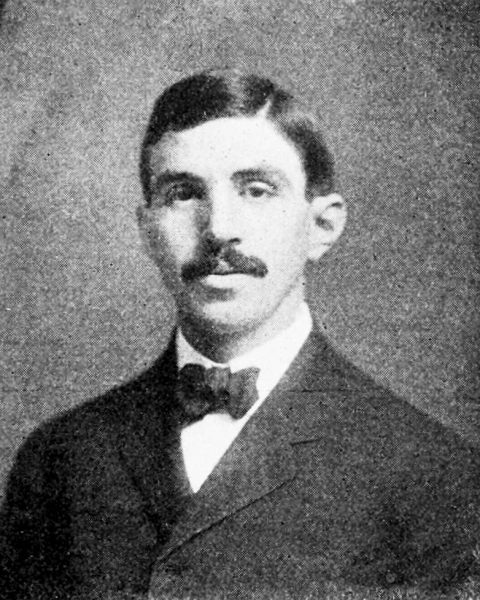 On April 2, 1878, American mathematician Edward Kasner was born. Kasner is best remembered for introducing the term “googol” for a very large number, which you might probably already know, at least if you know the story how the search engine “Google” got its name. Moreover, he is known also for the Kasner metric and the Kasner polygon.

Edward Kasner was born among eight siblings in New York City, USA, to Fanny Ritterman and Bernard Kasner, who were both of Austrian descent and settled to New York in the 1860s. He was brought up in New York where he attended Public School No 2 in lower Manhattan. In 1891, Kasner entered the College of the City of New York, where he was awarded a B.S. in 1896 having studied a range of subjects including mathematics, astronomy, logic, physics, and political science. Kasner went on to Columbia University for his graduate studies, where he was awarded a Master’s degree in 1897 and continued to work towards his doctorate advised by Frank Nelson Cole, and was awarded his Ph.D. in 1899 for his thesis The Invariant Theory of the Inversion Group: Geometry upon a Quadric Surface. He became one of the first people to be awarded a Ph.D. in mathematics by Columbia University.

Kasner spent the year 1899-1900 in Göttingen attending courses by Felix Klein [5] and David Hilbert [6], and returned to New York to be appointed as a mathematics tutor at Barnard College, which had been affiliated to Columbia University. In 1904 he was invited to address the International Congress of Arts and Sciences meeting at St Louis. Kasner gave the lecture Present Problems of Geometry and was delighted to have Henri Poincaré, another of the speakers at the Congress, in the audience. In 1906, he was promoted to adjunct professor , and in 1910 he was appointed as a full professor at Columbia University. In 1937 he was named Robert Adrain Professor of Mathematics at Columbia. He held this Chair until he retired in 1949 when he was named Adrain Professor Emeritus.[1]

From “GooGol” to “Google”

Kasner is best remembered today for the term ‘googol‘ and for his remarkable book Mathematics and the Imagination (1940) co-authored with James R Newman. Originally, therm was coined in 1920 by Kasner’s 9-year-old nephew Milton Sirotta.

The name “googol” was invented by a child who was asked to think up a name for a very big number, namely, 1 with a hundred zeros after it. He was very certain that this number was not infinite, and therefore equally certain that it had to have a name. At the same time that he suggested “googol” he gave a name for a still larger number: “Googolplex.” A googolplex is much larger than a googol, but is still finite, as the inventor of the name was quick to point out. It was suggested that a googolplex should be 1, followed by writing zeros until you get tired.
– Edward Kasner, James R Newman, Mathematics and the Imagination (1940)

In 1996, Larry Page and Sergey Brin [7] called their initial search engine “BackRub,” named for its analysis of the web’s “back links.” Sean Anderson, another grad student sharing office with Larry, verbally suggested the word “googolplex,” and Larry responded verbally with the shortened form, “googol”. An immediate search of the Internet domain name registry database showed that the domain still available for registration and use. But, Sean was not an infallible speller, and he made the mistake of searching for the name spelled as “google.com,” which he found to be available. Nevertheless, Larry liked the name, and registered “google.com” for himself and Sergey.[2]

The Kasner Metric is an exact solution to Einstein’s theory of general relativity. It describes an anisotropic universe without matter (i.e., it is a vacuum solution). As a university lecturer to undergraduates Kasner excelled, again getting an intuitive understanding across without undue rigour. Edward Kasner died on January 7, 1955, New York City, United States, at age 76.