You are here: Home › history › The Viking Raid on the Abbey of Lindisfarne 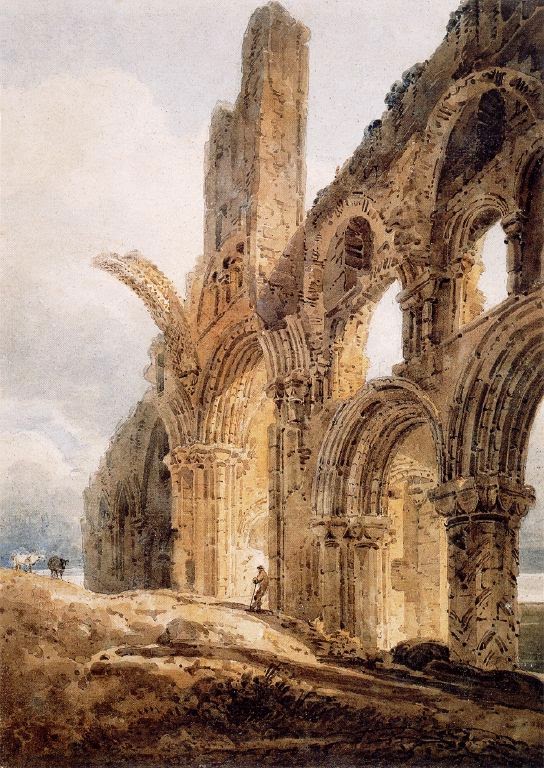 The Ruins of Lindisfarne Priory, by Thomas Girtin, 1798.

On 8 June, 793 AD, Vikings destroyed the abbey on Lindisfarne, a centre of learning that was famous across the continent. This event also is considered as the beginning of the Viking Age, when Scandinavian Norsemen explored Europe by its seas and rivers for trade, raids and conquest. Recently, this first Viking assault has gained more public interest because of the popular tv series “Vikings” (“Wrath of the Northmen“), in which the semi-legendary Ragnar Lodbrok organizes and leads the 793 attack on the priory by a small band of Vikings who head west, arrive on the shores of Lindisfarne, and shortly thereafter conduct the raid. But, today we want to take a look on the historical facts.

The Holy Island of Lindisfarne

The Island of Lindisfarne (also called Holy Island of Lindisfarne or simply Holy Island) is a tidal island off the northeast coast of England. It constitutes the civil parish of Holy Island in Northumberland and has a recorded history from the 6th century. It was an important centre of Celtic Christianity under Saints Aidan, Cuthbert, Eadfrith and Eadberht. The northeast coast of England had been little settled in Roman times and apart from the Tyne valley and the wall, little affected during the centuries of nominal Roman occupation. King Ida (reigned from 547) started the sea-borne settlement of the coast establishing a urbs regia at Bamburgh across the bay from Lindisfarne. The conquest was not straight forward however, the Historia Brittonum recounts how in the 6th century, Urien, prince of Rheged, besieged the Angles led by Theodoric at the island for three days and three nights.

The monastery of Lindisfarne was founded by Irish monk Saint Aidan, who had been sent from Iona off the west coast of Scotland to Northumbria at the request of King Oswald. The priory was founded before the end of 634 and remained the only seat of a bishopric in Northumbria for nearly thirty years. Lindisfarne became the base for Christian evangelising in the North of England. Monks from the Irish community of Iona settled on the island. Northumberland’s patron saint, Saint Cuthbert, who later also became bishop of Lindisfarne, was a monk and later abbot of the monastery, and his miracles and life are recorded by the Venerable Bede. An anonymous life of Cuthbert written at Lindisfarne is the oldest extant piece of English historical writing. At some point in the early 700s the famous illuminated manuscript known as the Lindisfarne Gospels, an illustrated Latin copy of the Gospels of Matthew, Mark, Luke and John, was made probably at Lindisfarne.

In 793, the Viking raid on Lindisfarne caused much consternation throughout the Christian west. A description of the raid is recorded in “History of the Church of Durham” by the monk Simeon:

On the seventh of the ides of June, they reached the church of Lindisfarne, and there they miserably ravaged and pillaged everything; they trod the holy things under their polluted feet, they dug down the altars, and plundered all the treasures of the church. Some of the brethren they slew, some they carried off with them in chains, the greater number they stripped naked, insulted, and cast out of doors, and some they drowned in the sea.

The devastation of Northumbria’s Holy Island shocked and alerted the royal Courts of Europe to the Viking presence. Alcuin, a Northumbrian scholar in Charlemagne’s court at the time, wrote:

Never before has such terror appeared in Britain as we have now suffered from a pagan race…The heathens poured out the blood of saints around the altar, and trampled on the bodies of saints in the temple of God, like dung in the streets.

Not all was Robbed

The Vikings robbed the monastery of all the valuables they could get their hands on, but there were two important treasures they overlooked – the beautiful, handwritten and illuminated bible “The Lindisfarne Gospels”, and the exquisite carved oak coffin containing the relics of St. Cuthbert. The Lindisfarne Gospels are today exhibited in the British Museum in London, while the relics of St. Cuthbert are kept in Durham Cathedral, where they were brought after the Viking raid. More than any other single event, the attack on Lindisfarne demonised perception of the Vikings for the next twelve centuries. Not until the 1890s did scholars outside Scandinavia begin to seriously reassess the achievements of the Vikings, recognizing their artistry, technological skills, and seamanship.

In England, many monasteries were established on islands, peninsulas, river mouths and cliffs. Isolated communities were less susceptible to interference and the politics of the heartland. The amazement of the English at the raids from the sea must have been matched by the amazement of the raiders at such (to them) vulnerable, wealthy and unarmed settlements. These preliminary raids, unsettling as they were, were not followed up. The main body of the raiders passed north around Scotland. With the raid on Lindisfarne the Viking Age of Scandinavian history and expansion began. Viking navigators opened the road to new lands to the north, west and east, resulting in the foundation of independent settlements in the Shetland, Orkney, and Faroe Islands; Iceland; Greenland; and L’Anse aux Meadows, a short-lived settlement in Newfoundland, circa 1000.