You are here: Home › physics › John Dollond – Improving the Telescope with Achromatic Lenses 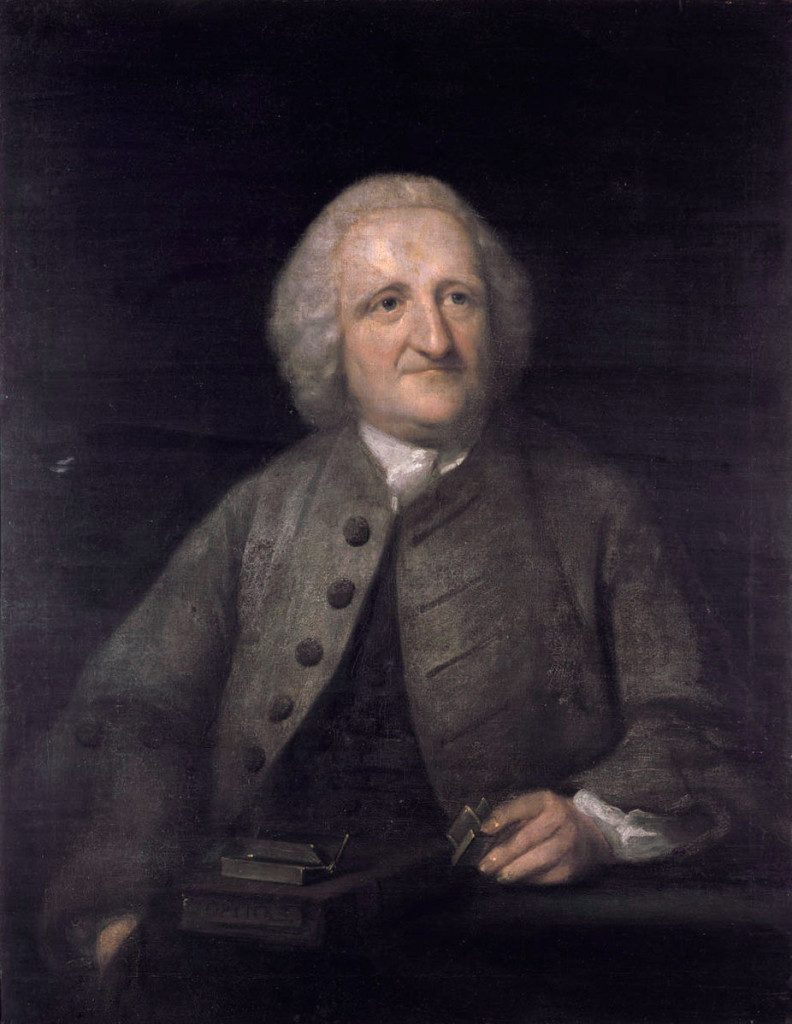 On June 10, 1706 (10 June O.S. / 21 June N.S.), English optician John Dollond was born. He is known for his successful optics business and his patenting and commercialization of achromatic lenses.

John Dollond came from a Huguenot emigrant family and initially worked as a silk weaver like everyone else in his family, but was also involved in astronomy and optics. He studied Latin, Greek, mathematics, physics, and anatomy and kept on working as a silk-weaver until the 1750s. Dollond then joined his eldest son Peter (1730–1820) who had started in the business of making optical instruments with good success. Dollond’s work ‘Account of some experiments concerning the different refrangibility of light‘ was published in 1758. In it, he describes the experiments that led him to the achievement with which his name is specially associated, the discovery of a means of constructing achromatic lenses by the combination of crown and flint glasses, which reduces chromatic aberration.

Achromatic lenses are corrected to bring two wavelengths (typically red and blue) into focus on the same plane. The most common type of achromat is the achromatic doublet, which is composed of two individual lenses made from glasses with different amounts of dispersion. Typically, one element is a negative (concave) element made out of flint glass such as F2, which has relatively high dispersion, and the other is a positive (convex) element made of crown glass such as BK7, which has lower dispersion. The lens elements are mounted next to each other, often cemented together, and shaped so that the chromatic aberration of one is counterbalanced by that of the other.

Already in 1747, Leonard Euler suggested that achromatism might be obtained by the combination of glass and water lenses.[4] Relying on negative statements made by Sir Isaac Newton, Dollond disputed this possibility. However later on the Swedish physicist Samuel Klingenstierna had pointed out that Newton’s law of dispersion did not harmonize with certain observed facts, he began experiments to settle the question.[5] In 1757, John Dollond succeeded in producing refraction without color by the aid of glass and water lenses, and a few months later he made a successful attempt to get the same result by a combination of glasses of different qualities. For this achievement, Dollond was awarded the Copley Medal by the Royal Society in 1758. Three years later, Dollond was elected one of the Society’s fellows. 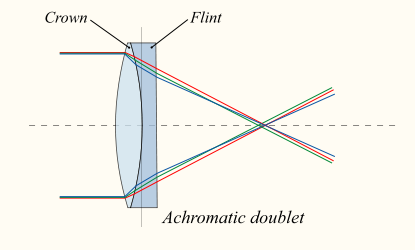 The high quality of Dollond’s flint glass lenses is due to the purchase of an extremely successful melt from northern England. In addition to his largest lens of 5 inches (12.7 cm), about a dozen with an aperture of 4 inches (about 10 cm) were created during Dollond’s lifetime. 20 years later, the up-and-coming astronomer Johann Hieronymus Schroeter, for example, considered himself lucky to be able to purchase such a telescope.

Not really the First

However, it is believed that Dollond was not the first to have created the first achromatic doublet. English barrister and amateur optician Chester Moore Hall is often credited with the invention, but it is further assumed that he wanted to keep his work secret and contracted the manufacture of the crown and flint lenses to two different opticians, Edward Scarlett and James Mann. They however sub-contracted the work to the same person, George Bass, who then realized that the two components were for the same client. It is possible that Hall never realized the significance of his invention and that Bass later mentioned Hall’s lenses to Dollond. Some say, Dollond then understood their great potential and managed to reproduce their design. He was granted a patent in 1758 which caused great debated with other opticians over the right to sell achromatic doublets. The improvement of the achromat, the apochromat was invented by Peter Dollond in 1763.