You are here: Home › literature › The Diary of a Young Girl – the Story of Anne Frank 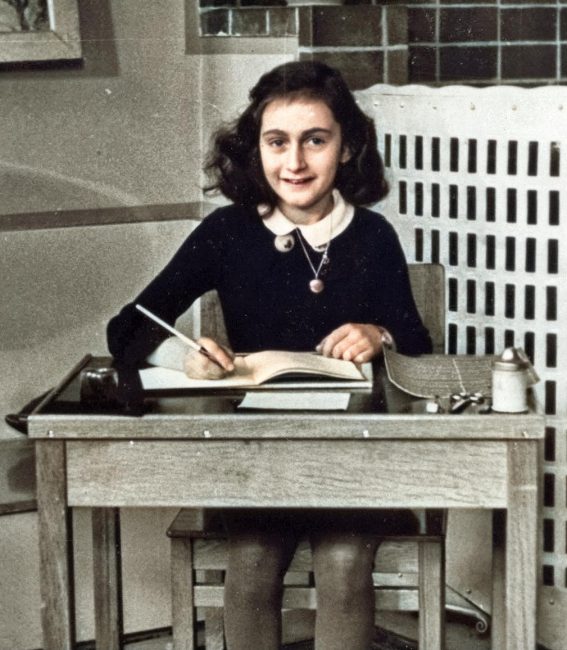 On June 12, 1929, Annelies “Anne” Marie Frank was born. She is one of the most discussed Jewish victims of the Holocaust. Her wartime diary The Diary of a Young Girl gained international fame posthumously when published in 1947. The diary documents her experiences hiding during the German occupation of the Netherlands in World War II.

“For someone like me, it is a very strange habit to write in a diary. Not only that I have never written before, but it strikes me that later neither I, nor anyone else, will care for the musings of a thirteen-year-old schoolgirl.”
– Anne Frank, The Diary of a Young Girl (1942 – 1944), 20 June 1942

The Frank Family – A New Start in the Netherlands

After getting married, Anne’s parents Otto and Edith Frank settled in Frankfurt, Germany, where they soon had two children: Margot in 1926, and Anne in 1929. Due to the the economic crisis which also empowered Hitler’s NSDAP, Anne’s parents, who were Jewish, were looking for a means of escape. Life had simply become to dangerous in Germany and in early March 1933 they were able to reach a decision: through his brother-in-law Erich Elias Otto is given an opportunity to set up a company in the Netherlands. The Franks were among 300,000 Jews who fled Germany between 1933 and 1939.

By February 1934, Edith and the children had arrived in Amsterdam, and the two girls were enrolled in school. The Frank sisters had highly distinct personalities, Margot being well-mannered, reserved, and studious, while Anne was outspoken, energetic, and extroverted. In May 1940, Germany invaded the Netherlands, and the occupation government began to persecute Jews by the implementation of restrictive and discriminatory laws; mandatory registration and segregation soon followed. Restrictions kept mounting, both for individuals and for Otto’s business. When Margot received a call-up for a German work camp on 5 July 1942, Otto and Edith decide the dangers have become too great. They took their family into hiding in the hiding place they prepared months before.

For her thirteenth birthday on 12 June 1942, Anne Frank received a book she had shown her father in a shop window a few days earlier. Although it was an autograph book, bound with red-and-white checkered cloth and with a small lock on the front, Frank decided she would use it as a diary, and began writing in it almost immediately. While many of her early entries relate the mundane aspects of her life, she also discusses some of the changes that had taken place in the Netherlands since the German occupation. The family was hiding in an attic apartment behind Otto Frank’s business, located at Prinsengracht 263 in Amsterdam, together with Otto’s business associate Hermann van Pels, along with his wife Auguste and their son Peter. In an effort to avoid detection, the family left a false trail suggesting they’d fled to Switzerland.

A small group of Otto Frank’s employees risked their own lives to smuggle food, supplies and news of the outside world into the secret apartment, whose entrance was situated behind a movable bookcase. The group of later overall 8 people lived in constant fear of being discovered and could never go outside. They had to remain quiet during daytime in order to avoid detection by the people working in the warehouse below. Anne passed the time, in part, by chronicling her observations and feelings in a diary. Anne started each diary entry ‘Dear Kitty’ and what followed was an incredibly candid and eloquent account of her life in confinement, expressing her fear, boredom and confusion at the situation she found herself in.

Discovered by the Gestapo

“There is an urge and rage in people to destroy, to kill, to murder, and until all mankind, without exception, undergoes a great change, wars will be waged, everything that has been built up, cultivated and grown, will be destroyed and disfigured, after which mankind will have to begin all over again.”
– Anne Frank, The Diary of a Young Girl (1942 – 1944), 3 May 1944

On August 4, 1944, the Gestapo (German Secret State Police) discovered the hiding place after being tipped off by an anonymous Dutch caller. This is when Anne’s diary suddenly ends. Anne and Margot were first sent to Auschwitz and then to Bergen-Belsen, where both sisters died of typhus in March 1945, just a few weeks before British troops liberated Bergen-Belsen on April 15, 1945. Anne was fifteen years old. Anne’s mother, Edith died in Auschwitz in early January 1945. Only Anne’s father, Otto, survived the war. Found in the secret apartment after the family was arrested, the diary was kept for Anne by Miep Gies, one of the people who had helped hiding the Franks. He gave Otto Frank the diary and a bundle of loose notes that she had saved in the hope of returning them to Anne. Anne’s diary was published after the war in many languages and is used in the curriculum of schools all over the world. Anne Frank has become a symbol for the lost promise of the children who died in the Holocaust.

At yovisto academic video search, we also have a copy of a collection of footage material gathered by the US Department of Defense as part of the effort to conduct war crimes trials in the direct aftermath of World War II. Please be advised that this video might contain content that is not suitable for all ages.