You are here: Home › history › Glienicke Bridge – The Bridge of Spies and the biggest Agent Swap in History 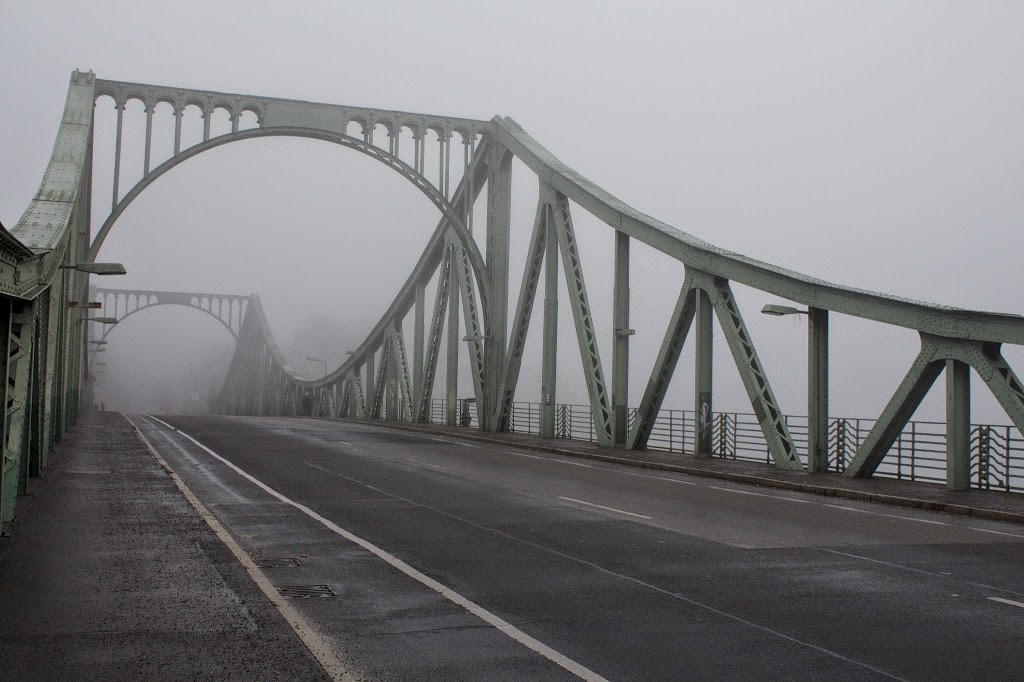 On June 11, 1985, the biggest agent swap known in history occurred at the Glienicke Bridge in Potsdam. There was a swap of 23 American agents held in Eastern Europe for Polish agent Marian Zacharski and another three Soviet agents arrested in the West. The exchange was the result of three years of negotiation.

The History of the Glienicke Bridge

The Glienicke Bridge became very famous during the Cold War, not only for its beauty, but for its function as an agent swapping location for the eastern and western governments. The bridge itself was built in the 17th century in order to guarantee the nobility a connection to Potsdam’s castles and famous hunting places. The first check point on the bridge was established in the 18th century. The bridge needed to be enlarged, wherefore everyone except the nobility had to pay a certain amount of money in order to pass. In 1831, Prussian architect, city planner, and painter Karl Friedrich Schinkel redesigned the bridge,[4] which was then built of stone. By the early 20th century, Schinkel’s bridge was no longer able to handle the increased volume in traffic, and operating the moveable sections of the bridge caused delays in steamer traffic on the Havel River. In 1904, the Prussian government held a design competition to replace Schinkel’s bridge with a modern, iron bridge. The Johann Caspar Harkort Company of Duisburg submitted the winning design, and the present-day bridge was inaugurated on 16 November 1907.

After the end of the Second World War, a temporary wooden construction was erected next to the impassable bridge. The reconstruction of the bridge began on 3 November 1947. Site manager Hans Dehnert had the collapsed steel structure lifted and reinserted into the preserved bridge sections in its original form. Re-opened in 1949, it contained a large white painted line in the middle, illustrating the border between the German Democratic Republic and West-Berlin. On 27 May 1952, East German authorities closed the bridge to citizens of West Berlin and West Germany. The bridge was closed to East German citizens after the construction of the Berlin Wall in August 1961. Only allied military personnel and foreign diplomats were allowed to access the bridge at any time.

Ministerial meeting on the West German side in 1962

The Bridge of Spies

When some important persons of the enemy were arrested in both military camps in the course of the Cold War, representatives negotiated an exchange of persons. The Glienicke Bridge proved to be particularly suitable. It was easily accessible from Berlin by the participating powers USA and Soviet Union and the surrounding area could be secured very well. The nearby Villa Kampffmeyer served the KGB as an observation post. Between 1962 and 1986, three exchange actions with a total of 40 persons were carried out on the Glienicke Bridge. Later, it therefore went through the media under the name “Agent Bridge”. The English nickname of the bridge is Bridge of Spies. The East Berlin lawyer Wolfgang Vogel played a decisive mediating role in the preparation of the exchanges in 1985 and 1986.

On February 10, 1962, Colonel Rudolf Ivanovich Abel, top Soviet spy in the USA, was replaced by Francis Gary Powers, an American pilot who had been shot down during a spy flight with the U-2 over the Soviet Union. Although the action was to be kept as secret as possible, the exchange caused headlines in the media. In 2015 the film Bridge of Spies – The Negotiator was released, whose main focus, despite the title of the film, is on prehistory, but in which the exchange is also portrayed. The corresponding scenes were shot at the end of 2014 at the original location.

After more than 20 years, political prisoners from both camps exchanged again on the Glienicke Bridge. GDR negotiator Wolfgang Vogel had agreed that 25 Western agents (including Eberhard Fätkenheuer and Werner Jonsek) imprisoned in the GDR and Poland would be exchanged for four spies (including Alfred Zehe and Alice Michelson) arrested in the West by the CIA. On 11 June 1985, 23 detainees were exchanged for four spies.

In 1980 the West Berlin government repaired its half of the bridge, and in 1985 the West Berlin government paid for repairs to the East German half of the bridge in exchange for formally renaming the bridge “Glienicke Bridge” from “Bridge of Unity.” On the evening of 10 November 1989, one day after the opening of the Berlin Wall, the Glienicke Bridge was reopened for pedestrians. Border fortifications and barricades were dismantled as a part of German reunification in 1990.