You are here: Home › biology › Clark Wissler and the Normative Aspect of Culture 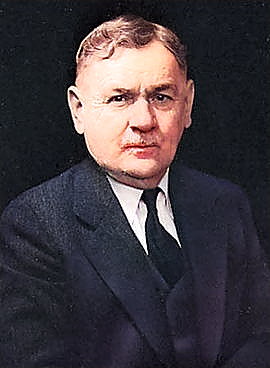 On September 18, 1870, American anthropologist Clark David Wissler was born. Wissler devised the age-area concept which held that the age of cultural traits could be found by correlating the diffusion of those traits throughout their associated area. He was the first anthropologist to perceive the normative aspect of culture, to define it as learned behavior, and to describe it as a complex of ideas, all characteristics of culture that are today generally accepted.

Clark Wissler was born in Wayne County, Indiana, USA, the eldest child in a family of seven children of of Pennsylvania Dutch descendents. Wissler’s father was at various times a farm laborer, farmer, carpenter, school superintendent, and editor of a country newspaper. He had served in the American Civil War. After graduating from Hagerstown High School, Clark Wissler taught in local schools between 1887 and 1892, and studied at Purdue University after the six-month school term ended. The following year in 1893 he was the principal of Hagerstown High School, and then he resigned his post and enrolled in Purdue University and later transferred to Indiana University, where he majored in psychology, graduating with a B.A. in 1897, and a M.A. in 1899.

In 1899 Wissler was appointed assistant in psychology at Columbia University. He continued his psychology graduate work under James McKeen Cattell and he received his Ph.D. in psychology in 1901. From 1901 to 1903, Wissler performed research on individual mental and physical differences. In his dissertation, Wissler strongly questioned the then prevailing method of intelligence testing, which was based on psychophysical measurement, with its roots in the eugenics movement and the work of Francis Galton.[6] According to the theories of his mentor Cattell and Galton, the two leading researchers at that time, intelligence, or mental ability, can be measured through reaction times, movement times, and other simple mental and sensory processes. By comparing the test scores Cattell had obtained from several hundred undergraduates with their academic grades, Wissler showed that there was no statistical correlation between the psychophysical scores and his independent measure of intelligence, i.e. the academic grades, nor among the psychophysical tests themselves. Thus, Wissler’s work revealed that the psychophysical methodology was not accurate and did not seem to be a valid measure of intelligence.[2]

Anthropology and Ethnology under Franz Boas

At Columbia, Wissler became increasingly interested in anthropology. In 1902 he became an assistant in Ethnology at the American Museum of Natural History under Franz Boas. He performed his field research from 1902 until 1905 on the Dakota, Gros Ventre, and the Blackfoot. Wissler’s fieldwork provided comprehensive ethnographies of each Native American culture, especially the Blackfoot. He should later publish eleven monographs based on this fieldwork. While Curator, Wissler funded ethnological and archaeological fieldwork of the Northern Plains and the Southwest. Wissler also encouraged physical anthropology, built up collections of worldwide scope, planned exhibitions, and oversaw the publication of about thirtyeight volumes of the Anthropological Papers of the American Museum of Natural History.

The Importance of Early Historical Records

Wissler was among the first to emphasize and illustrate the importance of early historical records. Concurrent and continuing interests were the significance of regional clusterings of certain traits and the relation between physical environment and culture.[5] He wanted to compare different cultures, but in order to do that he first needed to define what a culture is. According to Friedrich Ratzel, culture areas are regions of the world where people share common cultural traits. Faced with the diversity of customs, rituals, beliefs, and artifacts of various American Indian tribes, Wissler worked to systematize and map separate areas where each tribe had major influence. The growing amount of data collected through numerous expeditions also made such systematization necessary.[2] Wissler revolutionized the study of culture to a theory of cultural change and as an alternative to the Boasian style of anthropology. He shifted the analytical focus away from the culture and history of a specific social unit to “a concern with the trait-complex viewed in cross cultural perspective.

In 1924 Wissler began teaching at Yale University as a Psychological Researcher until 1931 when he switched to an Anthropology Professor, which he held until 1941. Wissler held the position of Curator of the Department of Anthropology until 1942 when he retired. In The American Indian (1917), a classic in North American ethnology, he explored the regional clustering of cultural traits and the relation between culture and physical environment, outlining the main culture areas. The distribution and adaptation of cultural traits and their relative ages were treated in Man and Culture (1923) and The Relation of Nature to Man in Aboriginal America (1926). His later works include Indian Cavalcade (1938) and Indians of the United States (1940).[1]