You are here: Home › mathematics › Charles Hermite’s admiration for simple beauty in Mathematics 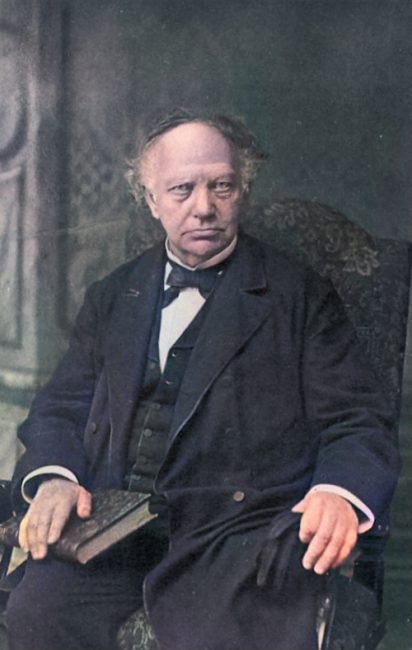 On December 24, 1821, French mathematician Charles Hermite was born. He was the first to prove that e, the base of natural logarithms, is a transcendental number. Furthermore, he is famous for his work in the theory of functions including the application of elliptic functions and his provision of the first solution to the general equation of the fifth degree, the quintic equation.

“There exists, if I am not mistaken, an entire world which is the totality of mathematical truths, to which we have access only with our mind, just as a world of physical reality exists, the one like the other independent of ourselves, both of divine creation.”
– Charles Hermite, quoted in The Mathematical Intelligencer, v. 5, no. 4.

Charles Hermite was born at Dieuze, in Lorraine, France, the sixth of a family of seven children. His father, Ferdinand Hermite, initially an engineer in a saltworks company, had turned to the cloth trade after his marriage to Madeleine Lallemand, daughter of a merchant in this branch. In 1828, the Hermite family moved to Nancy. The young Charles Hermite suffered from a malformation of his right foot, which handicapped him in his movements.

He studied first at the Royal College of Nancy, until the ninth grade, then in Paris, first at the Royal College Henri IV, then from 1840 at the Royal College Louis le Grand in special mathematics classes (without having passed the baccalaureate exams). He entered the École Polytechnique in 1842 but was refused to continue his education there due to a disability in his right foot. Hermite began corresponding with Carl Jacobi around 1843, which resulted in a fruitful working relationship on Abelian functions, then on the theory of numbers.[5]

Hermite spent about five years working on baccalauréat privately in order to have access to a career in teaching, and returned to the École Polytechnique as répétiteur and examinateur d’admission in 1848. In 1851 Hermite for the first time was a candidate at the Academy of Sciences, but only obtained one vote. In 1853 he left his position as assistant tutor, he then only held the position of admissions examiner. In 1856, he contracted smallpox. His friend Cauchy, by passing on his own religious convictions, helped him a lot to overcome this ordeal.[6] On July 14 1856, Hermite was elected to fill the vacancy created by the death of Jacques Binet in the Académie des Sciences and in 1862 Hermite was appointed maître de conférence at the École Polytechnique, a position which had been specially created for him. In the following year he became an examiner there. In 1869, he succeeded Jean-Marie Duhamel as professor of mathematics, both at the École Polytechnique, where he remained until 1876, but continued to hold the chair at the Sorbonne until he retired in 1897.

“I believe that numbers and functions of Analysis are not the arbitrary result of our minds; I think that they exist outside of us, with the same character of necessity as the things of objective reality, and we meet them or discover them, and stuty them, as do the physicists, the chemists and the zoologists.”
– Charles Hermite, as quoted in [1]

During this period, Hermite worked on quadratic forms, algebraic equations, and complex functions.  In particular, he gave a demonstration of Sturm’s and Cauchy’s theorems on the number of roots of an algebraic equation and showed how to solve a 5th degree equation using elliptic functions. Another topic on which Hermite worked and made important contributions was the theory of quadratic forms. This led him to study invariant theory and he found a reciprocity law relating to binary forms. With his understanding of quadratic forms and invariant theory he created a theory of transformations in 1855. His results on this topic provided connections between number theory, theta functions, and the transformations of abelian functions. In 1873 Hermite published the first proof that e is a transcendental number. This is another result for which he is rightly famous. Hermite is now best known for a number of mathematical entities that bear his name: Hermite polynomials, Hermite’s differential equation, Hermite’s formula of interpolation and Hermitian matrices.

Charles Hermite passed away on January 14, 1901. Hermite had the reputation of being a great teacher and his published lectures had a wide influence in the field of mathematics. His efforts in teaching were directed not towards too rigorous minuteness, but towards exciting admiration for things simple and beautiful. His published courses of lectures have exercised a wide influence.[7]