You are here: Home › mathematics › Augustin-Louis Cauchy and the Rigor of Analysis 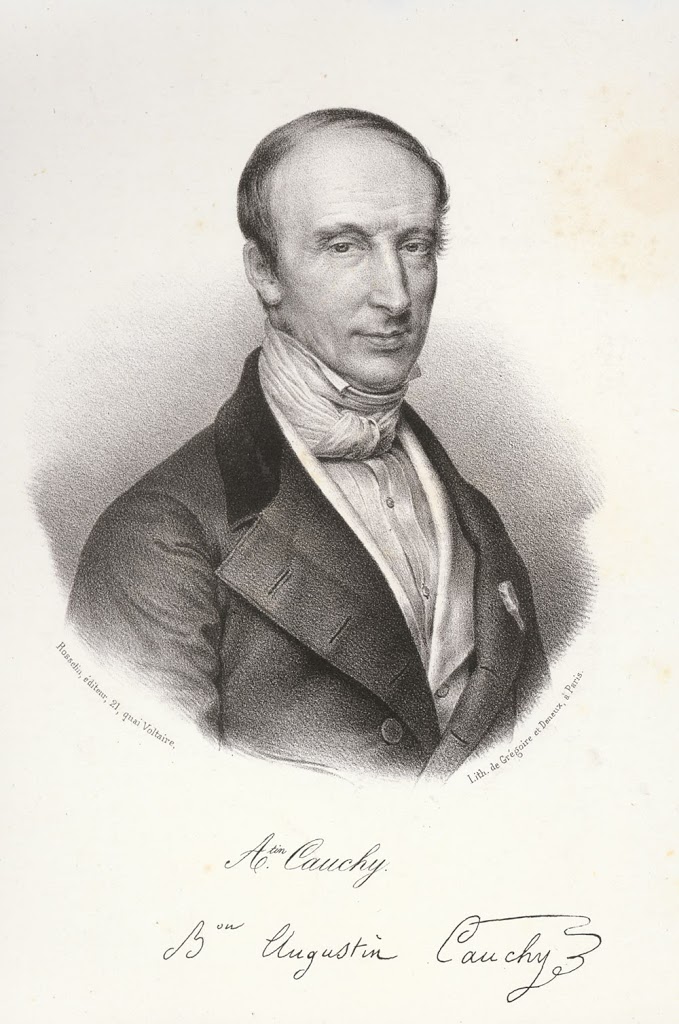 On August 21, 1789, French mathematician Augustin-Louis Cauchy was born. He is considered one of the greatest mathematicians during the nineteenth century. There are 16 concepts and theorems named for Cauchy, more than for any other mathematician. Cauchy was one of the most prolific mathematicians of all times. Cauchy wrote 789 papers, a quantity exceeded only by Euler and Cayley, which brought precision and rigor to mathematics.

Cauchy throughout my Maths Lectures

Actually, Cauchy was one of the heroes of my first math tutor at university, when I started to study computer science. In the mathematical analysis lecture (we had to enroll for 3 semesters of mathematical analysis), ‘Cauchy‘ was the name that appeared most during the lectures. This definitely is due to his significant contributions to infinitesimal calculus as well because of his theorems on complex analysis. More concepts and theorems have been named for Cauchy than for any other mathematician – although you might never have heard of him, if you are not a mathematician.

Augustin-Louis Cauchy was born in Paris, France, to his father, Luois-Francois, a high official in the Parisian Police of the New Régime, and his mother, Marie-Madeleine Desestre, who provided him and his siblings a comfortable life. Already as an early child, Cauchy had the fortunate possibility to know and to learn from famous contemporary scientists. The Cauchy family once had the mathematician and astronomer Pierre-Simon de Laplace [3] and famous chemist and physician Claude-Louis Berthollet as neighbors, and his father even knew mathematician Joseph-Louis Lagrange.[6] In fact, Lagrange had foreseen Augustin‘s scientific greatness when he was a child by warning his father to not show him any mathematical text before he was seventeen years old. Born in the turmoil of the French revolution, the Cauchy family had to escape from the following Reign of Terror (1794) to Arcueil, where Cauchy received his first education, from his father. In 1802, on Lagrange‘s advice, Augustin-Louis Cauchy was enrolled in the École Centrale du Panthéon, the best secondary school of Paris at that time. In 1805 he placed second out of 293 applicants on this exam for the École Polytechnique and furtheron pursued a career in engineering.

“I get up at four o’clock each morning and I am busy from then on. … I do not get tired of working, on the contrary, it invigorates me and I am in perfect health…” (Augustin-Louis Cauchy, in a letter to his mother, 1810)

The Beauty of Mathematics

After finishing school in 1810, Cauchy accepted a job as a junior engineer in Cherbourg, where Napoleon intended to build a naval base. Despite he had an extremely busy managerial job, Cauchy still found time to prepare mathematical manuscripts for the Institut de France, of which two were accepted. More and more attracted to abstract beauty of mathematics, he quit his engineering job and went back to Paris. Although he formally kept his engineering position, he was mainly on unpaid sick leave and spent his time quite fruitfully, working on mathematics. Over a period of fifteen years, 1815-1830, Cauchy‘s name grew with distinction as he was appointed adjoint professor and full professor at École Polytechnique, and chairs at the Faculté des Sciences and the Collège de France.

Cauchy was the first to make a rigorous study of the conditions for convergence of infinite series in addition to his rigorous definition of an integral. He clarified the principles of calculus and put them on a satisfactory basis by developing them with the aid of limits and continuity, concepts now considered vital to analysis. Cauchy did not have particularly good relations with other scientists. His stern Catholic views interfered with his scientific work as, e.g. he did on giving a report on the theory of light in 1824 when he attacked the author for his view that Newton had not believed that people had souls. The conservative political climate that lasted until 1830 suited Cauchy perfectly. During these years Cauchy was highly productive, and published one important mathematical treatise after another. In July 1830 France underwent another revolution and Cauchy escaped to Fribourg in Switzerland, leaving his family behind, where he had to decide whether he would swear a required oath of allegiance to the new republican government. He refused and consequently lost all his positions in Paris, except his membership of the Academy, for which an oath was not required.

“As for methods I have sought to give them all the rigour that one requires in geometry, so as never to have recourse to the reasons drawn from the generality of algebra.” (Augustin-Louis Cauchy)

In August 1833 Cauchy left for Prague, to become the science tutor of the 13-year-old Duke of Bordeaux Henri d’Artois, the exiled French Crown Prince. As a professor of the École Polytechnique, Cauchy had been a notoriously bad lecturer and the young Duke had neither taste nor talent for either mathematics or science. Therefore, student and teacher were a perfect mismatch. Cauchy’s role as tutor lasted until the Duke became 18 years old in 1838. While Cauchy was not able to do any research during, the Duke acquired a lifelong dislike of mathematics. The same year, Cauchy returned to Paris and his position at the Academy of Sciences. In 1848, revolution broke out all over Europe in numerous countries, beginning in France. France again became a republic and the oath of allegiance was abolished. Thus, the road to an academic appointment was finally clear for Cauchy and he was reinstated at the Faculté de Sciences, as a professor of mathematical astronomy.

“.. very often the laws derived by physicists from a large number of observations are not rigorous, but approximate.” (Augustin-Louis Cauchy)

Numerous terms in mathematics bear Cauchy’s name: the Cauchy integral theorem, in the theory of complex functions, the Cauchy-Kovalevskaya existence theorem for the solution of partial differential equations, the Cauchy-Riemann equations and Cauchy sequences. Augustin-Louis Cauchy’s collected works, including his 789 scientific papers, were published in 27 volumes. Cauchy’s last words to the Academy in 1857 were, “C’est ce que j’expliquerai plus au long dans un prochain memoire.” (I will explain it in greater detail in my next memoire). We assume that he was referring to a new proof or idea that was not yet thoroughly thought out. Two weeks later, Cauchy died at the age of 68. Who knows what mathematical discovery he has taken to his grave…