You are here: Home › literature › George Orwell’s Opposition to Totalitarism 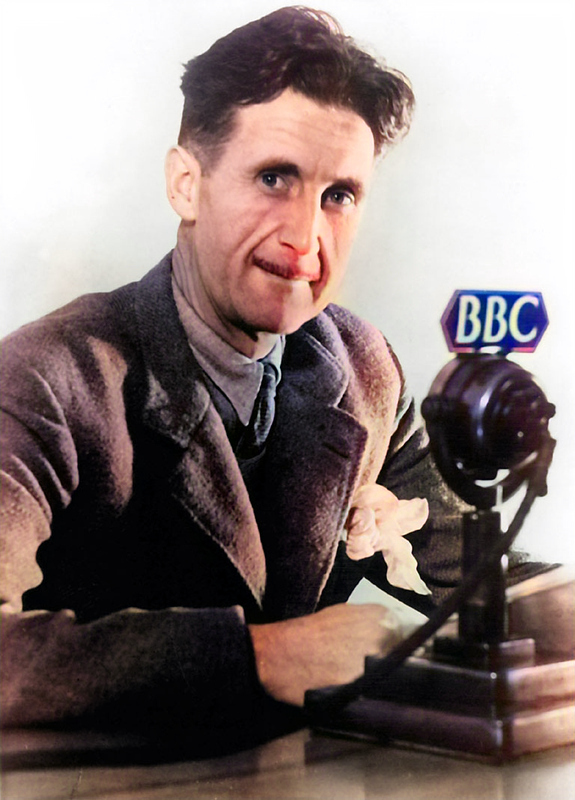 On January 21, 1950, British novelist and journalist Eric Arthur Blair, better known under his pen name George Orwell, passed away. Best known for the allegorical novella Animal Farm (1945) and the dystopian novel Nineteen Eighty-Four (1949), Orwell’s works focus on the awareness of social injustice, opposition to totalitarianism, and belief in democratic socialism.

For sure you will have heard of George Orwell. Even nerds like me living in their personal “ivory tower” cannot help but admit that George Orwell is one of the few authors that everybody has heard of. And this is not only because his ‘Animal Farm‘ or ‘1984‘ have been part of curriculum at high school. However, most times we know nothing more of the person George Orwell, but his name and that he was the author of the referenced famous novels.

George Orwell was born as Eric Arthur Blair on 25 June 1903, in Motihari, Bihar, in India into a family of the “lower-upper-middle class”. His father, Richard Walmesley Blair, worked in the Opium Department of the Indian Civil Service. His mother, Ida Mabel Blair (née Limouzin), grew up in Moulmein, Burma, where her French father was involved in speculative ventures. When Eric was one year old, his mother took him and his two sister to England. At the age of five, Eric was sent as a day-boy to a convent school in Henley-on-Thames. It was a Roman Catholic convent run by French Ursuline nuns, who had been exiled from France after religious education was banned in 1903.

Such, Such Were the Joys

His mother wanted him to have a public school education, but his family could not afford the fees, and he needed to earn a scholarship. Ida Blair’s brother Charles Limouzin recommended St Cyprian’s School, Eastbourne, East Sussex. The headmaster undertook to help Blair to win the scholarship, and made a private financial arrangement that allowed Blair’s parents to pay only half the normal fees. In September 1911 Eric arrived at St Cyprian’s and stayed there for the next five years, returning home only for school holidays. Blair hated the school and many years later wrote an essay “Such, Such Were the Joys“, published posthumously, based on his time there. At St. Cyprian’s, Blair first met Cyril Connolly, who became a noted writer and, as the editor of Horizon, published many of Orwell’s essays. In 1917, Eric moved to Eton, where he was a King’s Scholar from 1917 to 1921. Reports of his academic performance at Eton vary: some claim he was a poor student, others deny this. It is clear that he was disliked by some of his teachers, who resented what they perceived as disrespect for their authority. In any event, during his time at the school Eric made lifetime friendships with a number of future British intellectuals.

After finishing his studies at Eton, Eric had no further prospect of gaining a university scholarship and his family’s means also were insufficient to pay his tuition. Thus, he decided to join the Indian Imperial Police in Burma. There, Blair soon acquired a reputation as an outsider spending most of his time alone and reading. He resigned and returned to England in 1928 having grown to hate imperialism as can be observed by his novel Burmese Days, published in 1934, and essays as ‘A Hanging‘, and ‘Shooting an Elephant‘. In 1933, he adopted his pen name George Orwell while writing for the New Adelphi. He chose a pen name that stressed his deep, lifelong affection for the English tradition and countryside: George is the patron saint of England, while the River Orwell in Suffolk was one of his most beloved English sites.

A proponent for socialism, Orwell now wanted to write for the ‘common man’ and purposefully lived as a tramp in London and the Home Counties and stayed with miners in the north. He learned of the disparity between the classes and came to know a life of poverty and hardship amongst beggars and thieves. His study of the under-classes in general would provide the theme for many of his works to follow. In 1932 Blair was a teacher for a time before moving to Hampstead, London to work in a bookstore. In 1936 Orwell was commissioned by Victor Gollancz to produce a documentary account of unemployment in the north of England for his Left Book Club. The Road to Wigan Pier established Orwell as one of Britain’s leading writers and marked a high point in literary journalism. When Spanish civil war broke out, Orwell and his wife Eileen O’Shaughnessy, who got married a year before, both wanted to fight for the Spanish government against Francisco Franco’s Nationalist uprising. While on the front at Huesca in Aragon Orwell was shot in the throat by “a Fascist sniper”. In Barcelona he joined the anti-Stalinist Spanish Trotskyist Party of Marxist Unification. When the communists partly gained control, many of Orwell’s friends were arrested, shot, or disappeared. He and Eileen barely escaped with their lives in 1937.

One of the Animal Farm cartoon strips produced for the Cold War anti-communist department of the British Foreign Office, the IRD, 1950

In August 1941 Orwell began work for the Eastern Service of the British Broadcasting Corporation (BBC). His main task was to write the scripts for a weekly news commentary on the Second World War. In 1945, he finished writing one of his most popular books, Animal Farm, which was a satire in fable form of the communist revolution in Russia. The book, heavily influenced by his experiences of the way communists behaved during the Spanish Civil War, upset many of his left-wing friends. Although Orwell’s health was now steadily falling apart, he started work on his famous Nineteen Eighty-four. Published in 1949, this book is an elaborate satire on modern politics, uncovering the corrupt morals of humans foretelling a world in which humans are made less than human in a world where citizens are at the mercy of the state’s absolute control. The satirical novel is one of the darkest visions of the future in literature. George Orwell paints the horror picture of a totalitarian surveillance state according to the pattern of the Soviet Union. Such a state, which is based on total surveillance and control, is today also known as the “Orwell state”. The oppressive, dystopian vision has had a strong influence on science fiction literature, among other things. The book has been translated into 30 languages and reached runs of many millions.

“So far as I can see, all political thinking for years past has been vitiated in the same way. People can foresee the future only when it coincides with their own wishes, and the most grossly obvious facts can be ignored when they are unwelcome.”
— George Orwell, “London Letter” (December 1944), in Partisan Review (Winter 1945)

Orwell had accompanied tuberculosis for almost a decade, which is why he repeatedly had lung problems (but he also reported problems with a lung in childhood) and made cures in various sanatoriums. At the University College Hospital in London, he married Sonia Brownell, who was 15 years younger and employed as an editorial assistant at Horizon magazine by his friend Cyril Conolly. A few days before his planned departure to Switzerland, he suffered a pulmonary hemorrhage on which he died on the night of 21 January 1950 at the age of 46.

In 1996, Orwell received the Hugo Award for his novel Animal Farm posthumously, an award for science fiction literature.