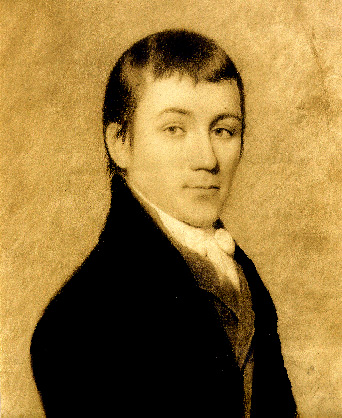 On January 17, 1771, American novelist, historian, and editor Charles Brockden Brown was born. He is generally regarded as the most important American novelist before James Fenimore Cooper. Although Brown was not the first American novelist, the breadth and complexity of his achievement as a writer in multiple genres makes him a crucial figure in U.S. literature and culture. However, outside the U.S. Charles Brockden Brown is mostly unknown. Thus, you might wonder why we have picked him for our blog. Now, this is simply a matter of personal choice. I always was a fan of gothic literature and Charles Brockden Brown falls into the same romantic period preceding today more famous authors such as Edgar Allan Poe.[6] I’ve read ‘Arthur Mervyn‘, one of his most famous novels, and I really can recommend it to you.

“I used to suppose that certain evils could never befall a being in possession of a sound mind; “
— Charles Brockden Brown, Wieland, or: The Transformation (1798)

Brown was born five years before the start of the American Revolution, the fourth of six surviving siblings in a Philadelphia Quaker merchant family to Elijah Brown, a land-conveyancer and agent in real estate transactions. Brown’s father was a liberal merchant who, like other colonists, opposed the Stamp Act and supported the goals of the Revolution.[2] From early age on Brown was of delicate constitution, and he early devoted himself to study. From 1781 to 1786 he received a classics-oriented secondary education under Robert Proud at the Friends’ Latin School of Philadelphia and displayed an enthusiasm for literary composition.[3] His family intended for him to become a lawyer. After six years in Philadelphia at the law office of Alexander Wilcocks, he ended his law studies in 1793. He became part of a group of young, New York-based intellectuals who helped begin his literary career.

During most of the 1790s, Brown developed his literary ambitions in projects that often remained incomplete and frequently used his correspondence with friends as a sort of laboratory for narrative experiments. His first publications appeared during the late 1780s, but generally he published little during this period. By 1798, however, these formative years gave way to a period of novel-writing during which Brown published the titles for which he is best known. In complex ways, these novels and the rest of Brown’s career are informed by the progressive ideas he uses and develops from the period’s British radical-democratic writers, most notably Mary Wollstonecraft, William Godwin, Thomas Holcroft, and Robert Bage. Brown was influenced by these writers and in turn exerted an influence on them and their younger studiers, for example in Godwin’s later novels, or in the work of Percy Bysshe Shelley and Mary Shelley, who reread Brown as she wrote her novels Frankenstein; or, The Modern Prometheus (1818).[7,8]

Although Brown was a prolific writer who excelled in a range of genres, from poetry and fiction to essays and historiography, his reputation developed almost exclusively around his six major novels. The first of his novels, Wieland, or: The Transformation (1798), is generally considered a minor masterpiece in American fiction. It shows the ease with which mental balance is lost when the test of common sense is not applied to strange experiences. The story is about Theodore Wieland, whose father died by spontaneous combustion apparently for violating a vow to God. The younger Wieland, also a religious enthusiast seeking direct communication with divinity, misguidedly assumes that a ventriloquist’s utterances are supernatural in origin; driven insane, he acts upon the prompting of this “inner voice” and murders his wife and children. When apprised of his error, he kills himself.[1]

In 1799-1800, Brown cofounded and edited The Monthly Magazine and American Review. After one of his friends was killed in a yellow fever epidemic that struck New York, Brown’s work took a marked change, ruminating on moral choice in the face of plague and death. Since his writing did not prove financially stable, he began working in his brother’s mercantile importing firm. In 1803, he founded another magazine, The Literary Magazine and American Register, a semi-annual of book reviews, fiction, government reports and essays which he vowed would embrace the cause of religion.[2]

His novel Arthur Mervyn draws on his experiences during the yellow-fever epidemics. It describes the adventures of Arthur Mervyn, a young man left to make his own way in the world. Leaving his rural home for Philadelphia, he becomes caught up in the schemes of the unscrupulous Welbeck in the nightmarish but still alluring setting of the plague-ridden city. Arthur ultimately establishes himself financially by marrying a wealthy woman. The embodiment of the self-made individual at the heart of liberal capitalist society, Arthur is ambiguously characterized as both a virtuous innocent and an opportunistic man on the make, revealing Brown’s own ambivalence about the individualistic values so cherished by his countrymen.[5]

Brown was not the first significant American novelist, but he was the first important American writer to envision an exclusively literary career based on the romantico-modern assumption that literature constituted a separate sphere of culture worthy of pursuit in its own right.[3] Brown’s novels are often characterized simply as gothic fiction, although the model he develops is far from the Gothic romance mode of writers such as Ann Radcliffe [4]. Brown’s novels combine several revolutionary-era fiction subgenres with other types of late-Enlightenment scientific and medical knowledge. Most notably, they develop the British radical-democratic models of Wollstonecraft, Godwin, and Holcroft and combine these with elements of German “Schauer-romantik” gothic from Friedrich Schiller and the enlightened sentimental fictions of Jean-Jacques Rousseau or Laurence Sterne.

“Dost thou wish me to complete the catalogue by thy death? Thy life is a worthless thing. Tempt me no more. I am but a man, and thy presence may awaken a fury which may spurn my control. Begone!”
— Charles Brockden Brown, Wieland, or: The Transformation (1798)

When Brown died form tuberculosis in Philadelphia in 1810 at the age of 39, he was an obscure author who had struggled to establish himself in an era that financially and socially discouraged literary careers.[3]