You are here: Home › literature › Ann Radcliffe – Pioneer of the Gothic Novel 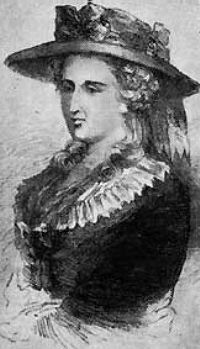 On July 9, 1764, English author and pioneer of Gothic novel Ann Radcliffe was born. You might have never heard of Ann Radcliffe, if you are not familiar with English literature, but her prose strongly influenced a literature style called ‘Gothic novel’, where the supernatural comes into play and all of today’s vampire, horror, and fantastic literature has originated from. Take, as e.g., her most famous novel Udolpho written in 1794, a classic example of Gothic Romance fiction. The heroine, Emily St Aubert, is imprisoned in an Apennines fortress by a sadistic villain, Count Montoni, and at the mercy of her imagination. Today you would probably call it a ‘penny-dreadful’ in the style of Barbara Cartland. BTW, did you know that Barbara Cartland according to her publisher has written more than 700(!) books, which reportedly sold more than 750 million copies? But, even contemporaries of Ann Raddcliff commented with mockery and sarcasm, most notably the famous Jane Austen,[6] who herself wrote a persiflage on Ann Raddcliff with her notable early novel ‘Northanger Abbey‘.

“Such is the inconsistency of real love, that it is always awake to suspicion, however unreasonable; always requiring new assurances from the object of its interest.”
– Ann Radcliffe, Udolpho (1794)

Unfortunately, only very little is known about the life of Ann Radcliffe. She was born as Ann Ward in Holborn, London on 9 July 1764 to William Ward, a haberdasher, who later moved to Bath to manage a China shop, and her mother Ann Oates. In 1787, she married Oxford graduate and journalist William Radcliffe, part-owner and editor of the English Chronicle. He often came home late, and to occupy her time she began to write and read her work to him when he returned home. They had a childless, but seemingly happy marriage. Ann called him her “nearest relative and friend.” The money she earned from her novels later allowed them to travel together, along with their dog, Chance. When Ann died on February 7, 1823, there were some reports that she was insane. Her husband claimed that she died of an asthma attack.

Because of so little was known about the life of Ann Radcliffe, apocryphal stories sprang up about her. So it was reported that she had gone mad as a result of her dreadful imagination and been confined to an asylum. Another rumor tells the incredible story that she had been captured as a spy in Paris, or that she ate rare pork chops before retiring to stimulate nightmares for her novels. Of course, non of these were true. 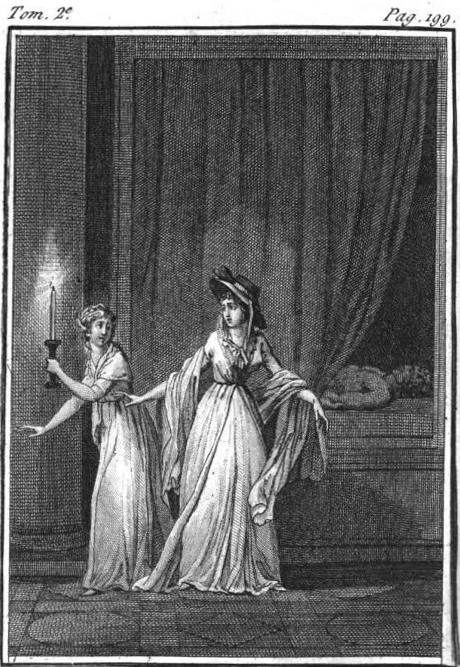 Illustration from the French edition of The Mysteries of Udolpho (Les Mystères d’Udolphe, 1798)

Radcliffe created the novel of suspense by combining the Gothic romance of Horace Walpole,[7] who initiated the genre of Gothic novels with his rather popular ‘Castle of Ortranto‘, with the novel of sensibility, which focused on an impeccable proper heroine and emphasized the love interest. Her first attempts were the romance novels The Castle of Athlin and Dunbayne (1789) and A Sicilian Romance (1790), both published anonymously. Her great breakthrough came with The Romance of the Forest (1791). The first edition was still published anonymously, but all others bore the name of the author. This novel established her alongside Clara Reeve as the most influential representative of the gothic novel, which represented her own style within the genre, which clearly differed from that of the previous horror novels. The focus of her books was on the romantic, pure and sensitive heroine, who in the course of the stories has to learn through frightening events to let her mind guide her feelings. In all of Radcliffe’s novels, “a beautiful and solitary girl is persecuted in picturesque surroundings, and, after many fluctuations of fortune, during which she seems again and again on the point of reaching safety, only to be thrust back into the midst of perils, is restored to her friends and marries the man of her choice” [1].

A well-informed mind is the best security against the contagion of folly and of vice. The vacant mind is ever on the watch for relief, and ready to plunge into error, to escape from the languor of idleness.
– Ann Radcliffe, Udolpho (1794)

Interesting to mention that Jane Austen, herself an author of the more romantic genre, wrote her first novel ‘Northanger Abbey‘ – which was first published after hear death – as a kind of persiflage of Ann Radcliffe’s ‘Udolpho’ and the Gothic genre in general. Austen’s heroine, Catherine Morland, reads ‘The Mysteries of Udolpho‘ and is so affected by it that she continually faints and sees conspiracies all around her.

Radcliffe influenced also generations of authors. She was admired by Honoré de Balzac [8] and influenced Victor Hugo, Alexandre Dumas, and Charles Baudelaire. Her magic continued to work its spell also on the modern horror story as H.P. Lovecraft [9] praised her for adding to the genre “a genuine sense of the unearthly in scene and incident which closely approached genius; eery touch of setting and action contributing artistically to the impression of illimitable frightfulness which she wished to convey.”[2] In a posthumous article published in 1826, Ann Radcliffe presented soul-expanding terror as a source of the sublime in the sense of Edmund Burke‘s theoretical writing of 1757 in contrast to soul-constricting horror. The sublime (longinus) refers to the boundless, the incomprehensible or the non-reproducible as a pre-romantic counter-draft to the classicist ideal of limitation and comprehensibility. Unlike Clara Reeve, in her novels she ultimately declared all seemingly supernatural events to be natural, thus paving the way for the development of the horror novel into the detective novel.

At yovisto academic video search you can learn more about Gothic literature in general in the lecture of Prof. Cyrus Patell with the title ‘American Gothic‘.