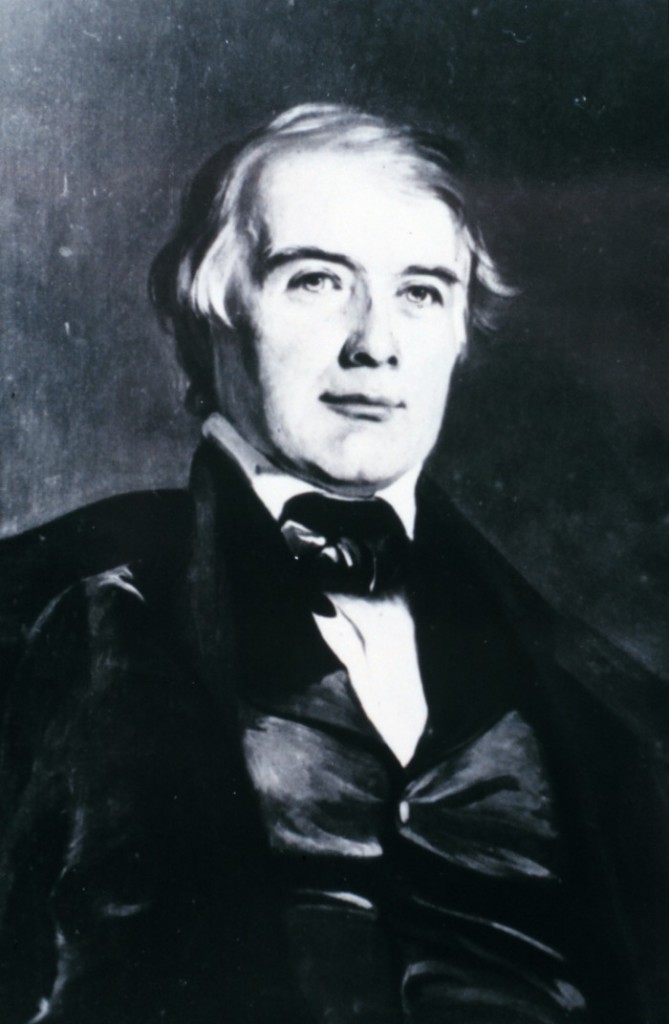 On May 9, 1785, U.S. Meteorologist James Pollard Espy was born. Espy developed a convection theory of storms and developed the use of the telegraph in assembling weather observation data by which he studied the progress of storms and laid the basis for scientific weather forecasting.

The youngest of ten children, James Espy was born in Westmoreland County, Pennsylvania, USA. He had an ardent desire for knowledge and commenced teaching school as a means to obtaining a classical education at Transylvania University, Lexington, Kentucky. After leaving the University in 1808 he taught an academy at Cumberland, Maryland. He studied law and practiced that profession four years at Xenia, Ohio. In 1812 he married his 16-year-old cousin Margaret Pollard and took her last name as his middle name. In 1817 he accepted a call to the classical department of the Franklin institute, and while in Philadelphia published in the “Journal of the Franklin Institute” his earliest researches in meteorology.[3] In about 1828 he began his studies and investigations into the cause of storms which made him, at that time, the foremost American meteorologist.

The most common kind of meteorological activity by this time was the gathering of observations. From these observations, physical explanations were sometimes deduced or the data were analyzed mathematically. From such roots arose movements to develop networks of observers and regular systems for processing the resulting data. Espy participated in this tradition in the founding of a system of meteorological observations in Pennsylvania in 1836 and in his labors to erect a national system of volunteer weather observers which was supplanted by Joseph Henry’s telegraph-linked corps of observers.[1] In 1834 he became meteorologist for both the Franklin Institute and the American Philosophical Society of Philadelphia. As chair of a joint committee, he established a network of weather observers to study storms. He convinced the Pennsylvania legislature to appropriate $4,000 to equip an observer in each county with barometer, thermometers, and rain gage. One result is the first appearance of meteorology in the records of Congress.

In 1833 he wrote a summary of his theory of the upward movement of the air in storms (convection) and of their self-sustaining power from the evolution of latent heat. He devised an instrument, the “nephelescope,” to simulate, as it were, the behavior of clouds and, particularly, to measure the dry and moist adiabatic cooling rates. While the resulting data varied from the correct values, Espy displayed great physical insight in deducing the role of latent heat in cloud formation and rainfall. He was, apparently, the first to point out that the latent heat released by condensation of the vapor in clouds resulted in a considerable expansion of the air, the latent heat, therefore, providing the energy for continued rain and upward movement of the cloud.[1]

Oldest series of weather maps in the United States. January 30, 1843. Produced by James Pollard Espy. In: First Report on Meteorology, to the Surgeon General of the United States Army. October 9, 1843, NOAA Photo Library, CC BY 2.0, via Wikimedia Commons

A member of Philadelphia’s Franklin Kite Club, Espy used kites to determine the height of cumulus clouds, and detected updrafts below the cloud bases. From data collected in kite flights, he was able to establish a relationship between cloud base heights and surface temperatures and dew points.[2] He was the first scientist to accurately describe how clouds form. He also noted that prairie fires or forest fires often preceded thunderstorms, and proposed that droughts could be ended by lighting forty acres of woodlands aflame once weekly at twenty mile intervals.[2]

In 1836 he abandoned the profession of teaching and began lecturing before scientific bodies and popular audiences. These lectures caused him to be popularly known as the “Storm King“. In 1840 he visited Europe, and presented his theories before the British association, to whose transactions he contributed papers on “Storms” and on the “Four Fluctuations of the Barometer.” A committee of the French academy of sciences examined his theory, and reported favorably on it. During the debate that took place in the academy, Arago said, “France has its Cuvier, England its Newton, America its Espy.“[3] In 1841 his most famous work The Philosophy of Storms was published in Boston. In 1843 he received an appointment under the war department, enabling him to prosecute his investigations in the Washington observatory. While holding this office he instituted a service of daily bulletins, in conjunction with the newspapers and the telegraph companies, on the condition of the weather in different localities. This constituted the earliest efforts of the weather bureau, which has since developed into an important branch of the war department.[3]

In January 1860, he suffered a stroke at his niece’s home; paralyzed, he died a week later.[2]