You are here: Home › mathematics › Carl Størmer and the Mathematical Model of the Formation of Aurorae 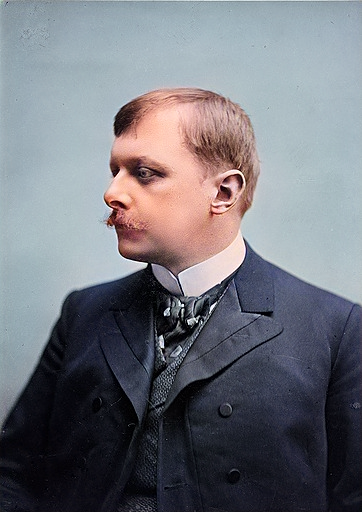 On September 3, 1874, Norwegian mathematician and geophysicist Carl Størmer was born. Carl Størmer is known both for his work in number theory and for studying the movement of charged particles in the magnetosphere and the formation of aurorae. He also contributed both important photographic observations and mathematical data to the understanding of the polar aurora, of stratospheric and mesospheric clouds, and of the structure of the ionosphere. The discovery of the Van Allen Radiation Belts by James Van Allen [3] confirmed with surprising accuracy Størmer’s theoretical analysis of solar charged particle trajectories in Earth‘s magnetic field.

Carl Størmer was born in Skien, Norway, the only child of a pharmacist Georg Ludvig Størmer (1842–1930) and Elisabeth Amalie Johanne Henriette Mülertz (1844–1916). He studied mathematics at the Royal Frederick University and later moved to Paris where he studied together with Picard, Poincaré, Painlevé, Jordan, Darboux, and Goursat at the Sorbonne. Størmer was appointed professor of mathematics at Kristiania in 1903 and he was elected the first president of the newly formed Norwegian Mathematical Society in 1918.

Størmer’s first mathematical publication, published when he was a beginning student at the age of 18, concerned trigonometric series generalizing the Taylor expansion of the arcsine function. He revisited this problem a few years later. Next, he systematically investigated Machin-like formula by which the number π may be represented as a rational combination of the so-called “Gregory numbers” of the form arctan 1/n. Størmer’s theorem, which he proved in 1897, shows that, for any finite set P of prime numbers, there are only finitely many pairs of consecutive integers having only the numbers from P as their prime factors. In addition, Størmer describes an algorithm for finding all such pairs. The superparticular ratios generated by these consecutive pairs are of particular importance in music theory.

It is believed that when Størmer observed Kristian Birkeland‘s experimental attempts to explain the aurora borealis, he was fascinated by aurorae and related phenomena. His first work on the subject attempted to model mathematically the paths taken by charged particles perturbed by the influence of a magnetized sphere, and Størmer eventually published over 48 papers on the motion of charged particles.

Carl Størmer with assistant Birkeland in 1910

Størmer was able to show that the radius of curvature of any particle’s path is proportional to the square of its distance from the sphere’s center. To solve the resulting differential equations numerically, he used Verlet integration, which is therefore also known as Störmer’s method. Størmer’s predicted particle motions were later verified by Ernst Brüche and Willard Harrison Bennett. Størmer’s calculations showed that small variations in the trajectories of particles approaching the earth would be magnified by the effects of the Earth’s magnetic field, explaining the convoluted shapes of aurorae.

Further, Størmer considered the possibility that particles might be trapped within the magnetic field, and worked out the orbits of these trapped particles, a prediction that was borne out after his death by the 1958 discovery of the Van Allen radiation belt.[3] Størmer, a keen photographer, also took pictures of around 20 different observatories across Norway. By measuring their heights and latitudes by triangulation, Størmer discovered that the aurora are typically as high as 100 kilometers above ground. He managed to classify them by their shapes and discovered the “solar-illuminated aurora” where the upper parts of an aurora are lit by the sun. Størmer published his work in several book, including From the depths of space to the heart of the atom and The Polar Aurora. In 1902, Størmer was decorated with King Oscar II’s Medal of Merit in gold. He was also decorated as a Knight, First Order of the Order of St. Olav in 1939. He was upgraded to Grand Cross of the Order of St. Olav in 1954