You are here: Home › biology › The Biosphere 2 Missions – Failures and Lessons Learned 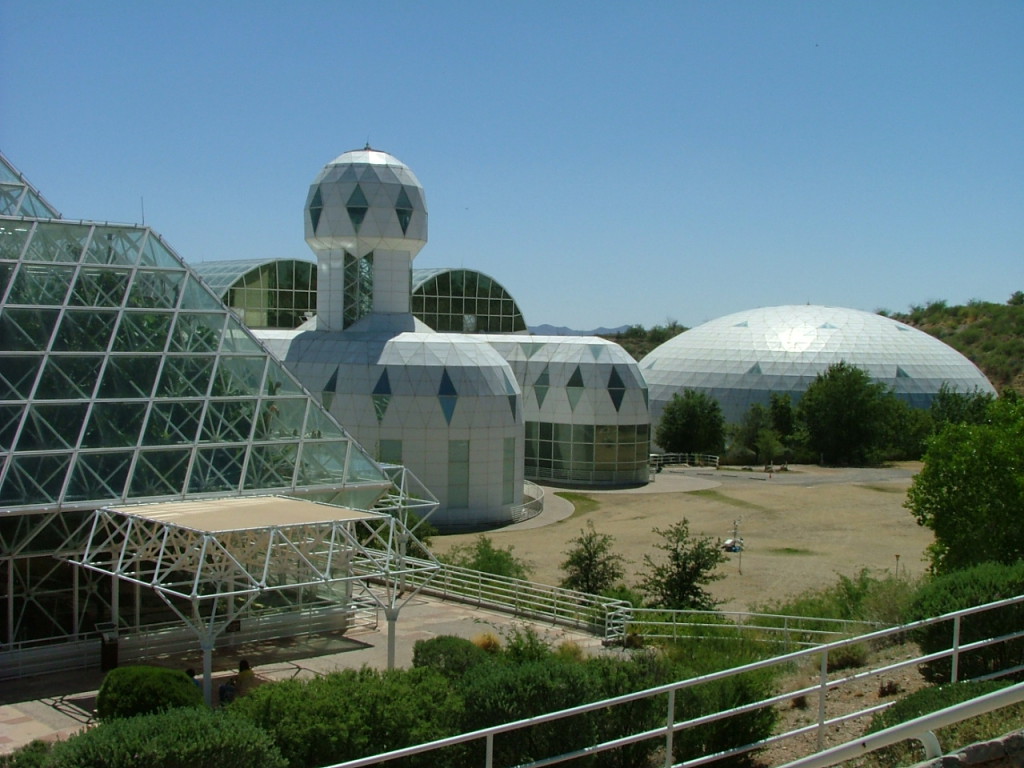 View of Biosphere 2, Habitat & Lung. The habitat is where the crew lived during the mission. The lung is what maintains air pressure inside the structure. Photo by DrStarbuck at Flickr [10]

On September 26, 1991, the first mission of Biosphere 2 began. Biosphere 2 is an Earth systems science research facility located in Oracle, Arizona, built to be an artificial, materially closed ecological system, or vivarium. It remains the largest closed system ever created.

Biosphere 2 was constructed between 1987 and 1991 by Space Biosphere Ventures and was named Biosphere 2 because it was meant to be the second fully self-sufficient biosphere, after the Earth itself. The facility is located in Oracle, Arizona and is elevated 1200 m above sea level.

Biosphere 2 was originally meant to explore the web of interactions within life systems in a structure with five areas based on biomes, and an agricultural area and human living and working space to study the interactions between humans, farming, and technology with the rest of nature. It also explored the use of closed biospheres in space colonization, and allowed the study and manipulation of a biosphere without harming Earth’s. The first closed mission started on September 26, 1992 with a crew consisting of a medical doctor and several researchers.

Despite the fact that the agricultural system produced bananas, papayas, sweet potatoes, beets, peanuts, lablab and cowpea beans, rice, and wheat, the eight team members reported continual hunger during the first year. During year two, they produced much more food, which increased their well being. Subsequent studies showed that the biospherians’ metabolism became more efficient at extracting nutrients from their food as an adaptation to the low-calorie, high nutrient diet. During their stay, the CO2 levels changed often and most of the vertebrate species and all of the pollinating insects died. However, insects like cockroaches boomed.

And the Problems began…

Some of the problems during the first mission were overstocked fish dying and clogging filtration systems, unanticipated condensation making the “desert” too wet, population explosions of greenhouse ants and cockroaches, and morning glories overgrowing the “rainforest”, blocking out other plants. In addition, construction itself was a challenge, such as manipulating the bodies of water to have waves and tidal changes was a difficulty.

Some controversy evolved when an injured team member was allowed to leave and new material was carried inside like plastic bags, ans (possibly) food. The mission officials were also accused of pumping oxygen inside to make up the failure in balancing the system.

The second mission started on March 6, 1994 with an announced run of ten months, however, the project did not go on as smooth. Abigail Alling and Mark Van Thillo, members of the first crew, allegedly vandalized the project from outside during the months of April through opening the double-airlock system and breaking glasses wherefore the captain left the team and was replaced soon after. Later on, more team members were exchanged and Mission 2 was ended prematurely on September 6, 1994.

The media often spoke of a failure of the project. Nevertheless, this “failure” resulted in findings that are likely to be valuable for future developments and tests of artificial habitats. Already the realization that it is not easily possible to create a habitat outside the earth that can be used by humans is seen as an important result of the project.

Biosphere 2 Today, The University of Arizona [4]