You are here: Home › geology › Abraham Gottlob Werner and the School of Neptunism 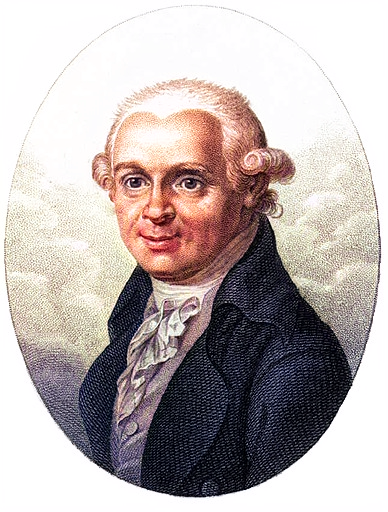 On September 25, 1749, German geologist Abraham Gottlob Werner was born. He is best known for his early theory about the stratification of the Earth’s crust. Moreover, he propounded an earth history that others labeled Neptunism that states that holding that all rocks have aqueous origins. While most tenets of Neptunism were eventually set aside, science is indebted to Werner for clearly demonstrating the chronological succession of rocks, for the zeal which he infused into his pupils, and for the impulse which he thereby gave to the study of geology. Thus, he has been called the “father of German geology.”

Abraham Gottlob Werner was born in Wehrau (now Osiecznica, Lower Silesian Voivodeship), a village in Prussian Silesia, as second child, and only son. His family had been involved in the mining industry for many years, where his father, Abraham David Werner, was an inspector at the Duke of Solm’s ironworks. Wernerwas educated at Freiberg and Leipzig, where he studied law and mining after working with his father for five years in the ironworks at Wehrau and Lorzendorf. While in Leipzig, Werner became interested in the systematic identification and classification of minerals. Within a year he published the first modern textbook on descriptive mineralogy, Von den äusserlichen Kennzeichen der Fossilien (On the External Characters of Fossils, or of Minerals; 1774). During his career, he discovered eight minerals and named 26. In 1775 he was then appointed as Inspector and Teacher of Mining and Mineralogy at the small, but influential, Freiberg Mining Academy. During his 40-year tenure, the school grew from a local academy into a world-renowned centre of scientific learning. Werner was a brilliant lecturer and a man of great charm, and his genius attracted students who, inspired by him, became the foremost geologists of Europe.[1]

A distinguishing feature of Werner’s teaching was the care with which he taught the study of rocks and minerals and the orderly succession of geological formations, a subject that he called geognosy. Influenced by the works of Johann Gottlob Lehmann and Georg Christian Füchsel, Werner demonstrated that the rocks of the Earth are deposited in a definite order. Although he had never travelled, he assumed that the sequence of the rocks he observed in Saxony was the same for the rest of the world.[1]

A Temporal Division of Rocks

In the 18th century, rocks were explained in terms of the biblical flood, and were classified into three categories that most people associated with the biblical flood: “primary” for ancient rocks without fossils (believed to precede the flood), “secondary” for rocks containing fossils (often attributed to the flood itself) and “tertiary” for sediments believed to have been deposited after the flood. Werner didn’t overturn the commonly held belief in the biblical flood, but he did recognize a different group of rocks that didn’t fit this classification: rocks with a few fossils that were younger than primary rocks but older than secondary rocks. He called these “transition” rocks.[4] During his career, Werner published very little, but his fame as a teacher spread throughout Europe, attracting students, who became virtual disciples, and spread his interpretations throughout their homelands. Socratic in his lecturing style, Werner developed an appreciation for the broader implications and interrelations of geology within his students, who provided an enthusiastic and attentive audience.

Werner theorized that at one time the Earth had been completely covered with oceans and that as sediments and chemicals in the water fell to the ocean floor, they formed layers of rock, which eventually became the land. Over time, water from the ocean evaporated, exposing the land and leaving pockets of water in low-lying areas. Werner’s ideas had many followers and they came to be known as Neptunists, after Neptune, the Roman god of the water. But Werner’s theory was not without opposition. Scottish geologist James Hutton [5] had a much different theory. Hutton led a group known as the Plutonists, named for Pluto, the Roman god of the underworld. The Plutonists held that rock formed with the aid of heat instead of water. During the late 1700’s, there was a great deal of debate in the scientific community as to which group was correct. Although some of Hutton’s ideas were later modified, scientists in the early 1800’s were able to prove that his theory was more accurate, and Werner’s Neptunism was discredited.[2] One criticism of this hypothesis was that Werner hadn’t traveled enough to verify it.

A Classification of Minerals

However, Neptunism certainly had its attractions, with Werner’s disciples distributed all over Europe. The advantages of the theory were that it was theologically acceptable, it was simple, and it showed how the Earth could be formed in the short time available.[3] Werner was also a mineralogist and he constructed a new classification of minerals. There was a major split among 18th-century mineralogists as to whether minerals should be classified according to their external form (the natural method) or by their chemical composition (the chemical method). Werner finally adopted, in 1817, a mixed set of criteria by which he divided minerals into four main classes – earthy, saline, combustible, and metallic.[3]

Werner was plagued by frail health his entire life, and passed a quiet existence in the immediate environs of Freiberg. He died at Dresden as a bachelor in 1817, from internal complications said to have been caused by his consternation over the misfortunes that had befallen Saxony during the Napoleonic Wars.