You are here: Home › philosophy › Basilios Bessarion and the Great Revival of Letters 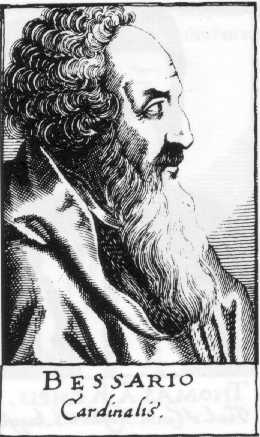 On January 2, 1403, Roman Catholic Cardinal Bishop Basilius Bessarion was born. The titular Latin Patriarch of Constantinople, Bessarion was one of the illustrious Greek scholars who contributed to the great revival of letters in the 15th century. One of the most learned scholars of his time, Bessarion spread knowledge of Greek language and learning by building a personal library that included a large collection of Greek manuscripts, by his patronage of scholars, and by his writing. In the last century of Byzantium, as the Ottoman conquests culminated in the taking of Constantinople in 1453, cultural influences between East and West flowed in both directions. The impact of Greek émigrés, manuscripts, and ideas upon the Italian Renaissance is well known. Cardinal Bessarion participated in this two-way exchange and indeed, contributed to it to an eminent degree.[1]

Basilius Bessarion was born in Trebizond, the Black Sea port in northeastern Anatolia that was the heart of Pontic Greek culture and civilization during the Byzantine and Ottoman periods. The year of his birth has been given as 1389, 1395 or 1403. In 1413, while still very young, he was sent to Constantinople, where he devoted himself to study, achieving great success in the field of letters [2], and went in 1423 to the Peloponnese to hear Gemistus Pletho, who was a bitter opponent of Aristotle, against whom he championed with immoderate zeal the doctrines of Plato.[2] On becoming a tonsured monk in the Order of St. Basil, he adopted the name of an old Egyptian anchorite Bessarion, whose story he has related. In 1436 Bessarion became abbot of a monastery in Constantinople and in 1437, he was made metropolitan of Nicaea by the Byzantine Emperor John VIII Palaeologus, whom he accompanied to Italy in order to bring about a reunion between the Orthodox and Catholic churches, which had been separated since the Schism of 1054.

The Byzantine emperor had hoped to use the possibility of re-uniting the churches to obtain help from Western Europe against the Ottoman Turks. Bessarion participated in the Byzantine delegation to the Council of Ferrara-Florence as the most eminent representative of unionists in 1439. The success of the union efforts depended on an agreement on the dogmatic disputes, among which the most important was the disagreement about the “filioque” in the Creed, which had been entrenched for centuries. The question was whether the Holy Spirit proceeds only from God the Father, as the Orthodox theologians believed, or also from the Son of God (Latin filioque “and from the Son”), as Roman dogmatics taught. The Roman Church had inserted the addition “filioque” into the Creed on its own authority, without consulting the other churches first. For the Orthodox this was unacceptable. Upon his return to Greece, he found himself bitterly resented for his attachment to the minority party that saw no difficulty in a reconciliation of the two churches. At the Council of Florence, held in Ferrara and then Florence, Bessarion supported the Roman church and gained the favor of Pope Eugene IV, who invested him with the rank of cardinal at a consistory of 18 December 1439. The appointment of a Greek to the College of Cardinals was to strengthen the Union. Thus the decision about the further course of life of the Byzantine metropolitan was made, he finally moved to Italy.

Bessarion continued as governor of Bologna for five years (1450–1455), and introduced wise reforms into the city government and in the administration of justice. The city of Bologna had de facto detached itself from the Papal States, to which it formally belonged, and established itself as an independent republic in which wild power struggles between rival families raged. To put an end to this state of affairs, the pope sent Bessarion “like an angel of peace,” in his words. As a Greek, the legate was particularly suited for this purpose, since he could be considered a neutral authority in the party feuds of the Italians. He succeeded in maintaining internal peace and consolidating papal authority in Bologna through a skilful balancing policy. Above all he lavished all his attention and generosity on the university, Bologna’s greatest glory, restoring the building which threatened to fall into ruins. He gathered there as teachers the most famous professors of the time, supplying at his own expense the deficiencies in their honoraria, and encouraging with munificence particularly the study of the classics.

Thus, he gathered about him a court of poets and men of letters.[2] His palazzo in Rome was a virtual Academy for the studies of new humanistic learning, a center for learned Greeks and Greek refugees, whom he supported by commissioning transcripts of Greek manuscripts and translations into Latin that made Greek scholarship available to Western Europeans. He supported Regiomontanus in this fashion and defended Nicholas of Cusa.[7,8] He is known in history as the original patron of the Greek exiles (scholars and diplomats) including Theodore Gaza, George of Trebizond, John Argyropoulos and many others.

Bessarion cultivated intellectual exchange with Pope Nicholas V, who was enthusiastic about classical education. He supported him in the expansion of the papal library by procuring Greek manuscripts from Trapezunt. At his suggestion, Nicholas decided to promote the great project of a complete Latin translation of the writings of Aristotle. Bessarion had already begun this task; at his suggestion, the pope entrusted the Byzantine humanist Theodorus Gaza with continuing the work. 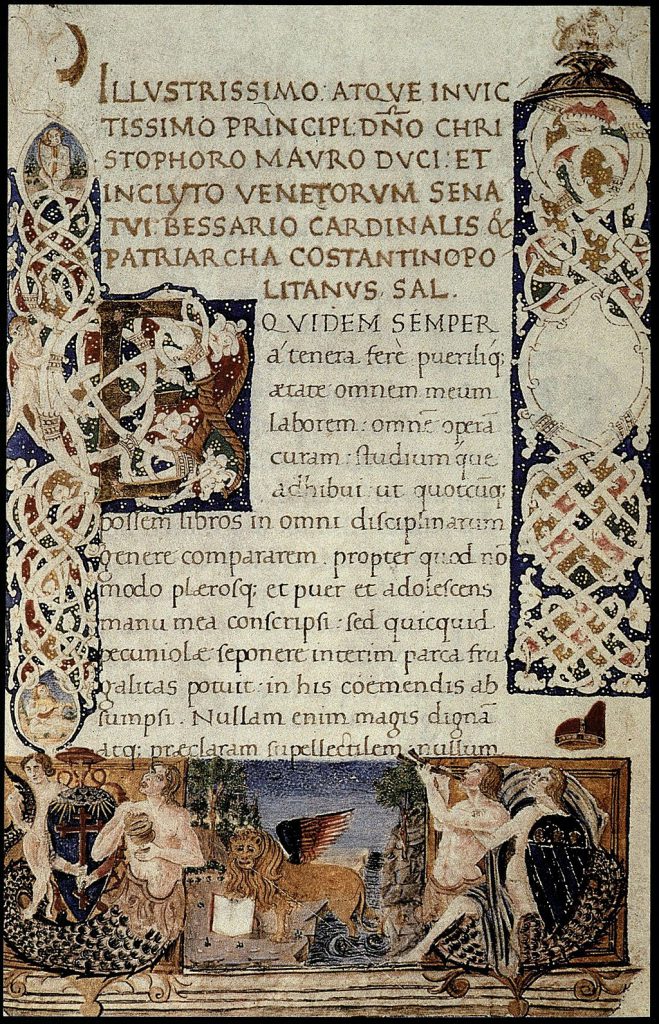 The letter of May 31, 1468, with which Bessarion announces the donation of his library to Doge Cristoforo Moro and the Senate of Venice, in the manuscript Venice, Biblioteca Nazionale Marciana, Lat. XIV, 14 (= 4235), fol. 1r

Bessarion’s library was of outstanding importance for the reception of Greek literature in the West. The impetus for the cardinal to collect books came from the conquest of Constantinople. It led him to the project of saving the intellectual heritage of Greekism, which had been preserved until then in the capital of the Byzantine Empire, and making it accessible to the educated in a safe place. To this end, he systematically purchased manuscripts in the Greek-speaking world. What he could not buy, he had copied. He liked to compile the collected works of an author in a luxurious splendid volume, thus creating in his private library the largest collection of Greek books in the West.

The Fall of Constantinople

A striking caesura in Bessarion’s life was the Turkish conquest of Constantinople in May 1453. The fall of the Byzantine Empire shook the Western world. Nicholas V and his successors Calixtus III (1455-1458) and Pius II (1458-1464) planned the reconquest and made the preparation of a crusade the main content of their foreign policy activities. For Bessarion, this goal became the primary political concern to which he devoted himself tirelessly during the rest of his life. In this, the Republic of Venice played a key role.

At the papal conclave of 1455 which elected the Aragonese candidate, Alfons de Borja, as Callixtus III, Cardinal Bessarion was an early candidate for his disinterest in the competition between Roman factions that pressed candidates of the Orsini and Colonna factions. As primus Cardinalium (from April 1463) — the title Dean of the Sacred College of Cardinals was not yet in use — Cardinal Bessarion presided over the Papal conclave, 1464 and Papal conclave, 1471.

Bessarion was one of the most learned scholars of his time. Besides his translations of Aristotle’s Metaphysics and Xenophon‘s Memorabilia, his most important work is a treatise directed against George of Trebizond, a vehement Aristotelian who had written a polemic against Plato, which was entitled In Calumniatorem Platonis (“Against the Slanderer of Plato“). Bessarion, though a Platonist, was not so thoroughgoing in his admiration as Gemistus Pletho, and he strove instead to reconcile the two philosophies. His work, by opening up the relations of Platonism to the main questions of religion, contributed greatly to the extension of speculative thought in the department of theology. It was thanks to him that the Bibliotheca of Pseudo-Apollodorus, an important compendium of Greek Mythology dated from the first or second century AD, has survived to the present. His library, which contained a very extensive collection of Greek manuscripts, was presented by him in 1468 to the senate of Venice, and forms the nucleus of the famous library of St Mark’s, the Biblioteca Marciana. It was 482 Greek manuscripts and 264 Latin manuscripts.

After the futile legation in France, Bessarion was discouraged and attacked by his illness. On his way home, the strenuous crossing of the Alps was a strain on him, and he fell ill with the dysentery. Dramatically weakened, he had to interrupt his journey in Ravenna. There he died on 18 November 1472. There was a rumor that he had been poisoned.