You are here: Home › photography › Assisting a Self Portrait – The Art of August Sander

On Nov 17, 1876, German portrait and documentary photographer August Sander was born. Sander has been described as “the most important German portrait photographer of the early twentieth century“. His work includes landscape, nature, architecture, and street photography, but he is best known for his portraits, as exemplified by his series People of the 20th Century. In this series, he aims to show a cross-section of society during the Weimar Republic.

August Sander was born in Herdorf-am-der-Sieg, Rhineland-Palatinate, Germany, the son of a carpenter working in the mining industry. He left school at 14 to start working at a local mine, where Sander first learned about photography by assisting a photographer who was working for a mining company. With financial support from his uncle, he bought photographic equipment and set up his own darkroom in 1892. Sander spent his military service (1897–99) as a photographer’s assistant and the next years wandering across Germany. In 1901, he started working for a photo studio in Linz, Austria, eventually becoming a partner (1902), and then its sole proprietor (1904). He left Linz at the end of 1909 and set up a new studio in Cologne.

People of the 20th Century

In 1911, Sander began with the first series of portraits for his work People of the 20th Century by photographing local peasants, which inspired him to produce a series of portraits of German people from all strata of society. His portraits were usually stark, photographed straight on in natural light, with facts of the sitters’ class and profession alluded to through clothing, gesture, and backdrop.[5] Sander favoured large-format cameras with lengthy exposure times so he could focus on detail. He described his work as “assisting a self-portrait”.[6] He continued the series until his death in 1964. Overall, the series is divided into seven sections: The Farmer, The Skilled Tradesman, Woman, Classes and Professions, The Artists, The City, and The Last People (homeless persons, veterans, etc.). By 1945, Sander’s archive included over 40,000 images. 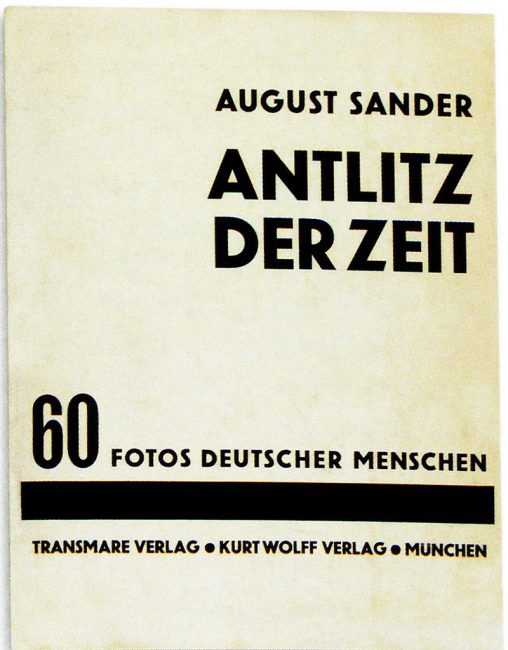 Comparative photography and direct observation are the keywords that aptly characterize August Sander’s methodical approach and point to his efforts to present his work in an unprejudiced and realistic manner. For it was above all in the juxtaposition of the series of pictures that he saw the possibility of allowing typical physiognomies and body languages of different professions, genders and generations as well as individual appearances to emerge. In the early 1920s, he came in contact with the (Cologne Progressives) a radical group of artists linked to the workers’ movement. In 1927, Sander and writer Ludwig Mathar travelled through Sardinia for three months, where he took around 500 photographs. However, a planned book detailing his travels was not completed.

“NOTHING is more hateful to me than photography sugar-coated with gimmicks, poses and false effects,” wrote August Sander in 1927.

Sander’s Antlitz der Zeit (Face of our Time) was published in 1929. It contains a selection of 60 portraits from his series People of the 20th Century, and is introduced by an essay by Alfred Döblin titled “On Faces, Pictures, and their Truth.” Under the Nazi regime, his work and personal life were greatly constrained. Sander was subjected to official disapproval, perhaps because of the natural, almost vulnerable manner in which he showed the people of Germany or perhaps because of the heterogeneity it revealed.[5]

His son Erich, who was a member of the left wing Socialist Workers’ Party (SAP), was arrested in 1934 and sentenced to 10 years in prison, where he died in 1944. Sander’s book Face of our Time was seized in 1936 and the photographic plates destroyed. Around 1942, during World War II, he left Cologne and moved to a rural area, allowing him to save most of his negatives. His studio was destroyed in a 1944 bombing raid. Thirty thousand of Sander’s roughly forty-thousand negatives survived the war, only to perish in an accidental fire in Cologne in 1946. In the same year, August Sander began an extensive photographic documentation of the war-ravaged city of Cologne. Sander practically ceased to work as a photographer after World War II.

The Family of Man

Edward Steichen,[7] director of the photography department of the New York Museum of Modern Art, visited him in 1952 and acquired 50 pictures on various subjects from his archive. Three years later, three of August Sander’s copies were included in the traveling exhibition The Family of Man, curated by Edward Steichen. The Federal Republic of Germany awarded Sander the Order of Merit in 1960. August Sander died in Cologne in 1964 at age 87.

At yovisto academic video search you can learn more the photographer August Sander from an interview with his grandson Gert Sander.