You are here: Home › mathematics › August Ferdinand Möbius and the Beauty of Geometry 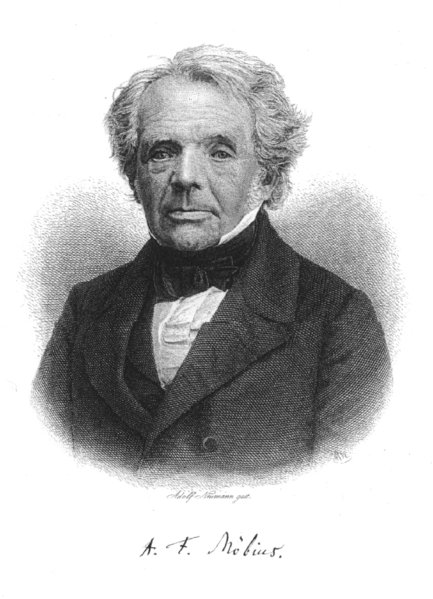 On November 17, 1790, German mathematician and astronomer August Ferdinand Möbius was born. He is best known for his discovery of the Möbius strip, a non-orientable two-dimensional surface with only one side when embedded in three-dimensional Euclidean space.

August Möbius’ father Johann Heinrich Möbius was a dance teacher in Schulpforta, near Naumburg on the Saale River in the German state of Saxony-Anhalt. He died three years after the birth of August Ferdinand. The mother Johanne Katharine Christiane Keil (1756-1820) was a descendant of Martin Luther.[5] After the early death of his father, his mother took care of the school education herself. August Möbius’ interest in mathematics evolved early, but it is said that his teacher hid several mathematical books from the curious boy to guarantee a widely ranged education instead of mathematics only. He attended the traditional regional school Pforta in his native town and graduated from high school there. He first studied law before turning to studying mathematics at the University of Leipzig in the second semester 1809 to 1814. He is particularly influenced by his astronomy professor Karl Mollweide, who is also the discoverer of a true to area map projection and some trigonometric formulas. In the meantime he attended lectures in Göttingen with Carl Friedrich Gauss and in Halle with Johann Friedrich Pfaff, one of Gauss’s teachers. He received his doctorate under Johann Friedrich Pfaff with the topic De computandis occultationibus fixarum per planetas, (calculation methods for the occultation of fixed stars by planets).

Through a scholarship he was then able to work for Karl Friedrich Gauss,[4] who is known to have influenced the young scientist significantly. After his habilitation, which he earned with the work titled “De peculiaribus quibusdam aequationum trigonometricarum” in 1815, on the recommendation of Carl Friedrich Gauss, he was appointed extraordinary professor and observer of the Leipzig Observatory.

Having achieved all of this, Möbius was not even 26 years old, but further promotions were difficult. Möbius was known to be very unpretentious, extremely scientifically accurate and in love with Saxony, wherefore he refused several job offers all over Europe. Eventually, he accepted a position as a professor at the University of Jena, where he worked for the rest of his life. He was appointed director of the observatory in 1848. From 1846 he was a member of the Göttingen Academy of Sciences.  From 1840 onwards he dealt with topological questions; the five-prince problem he posed has entered the literature: once upon a time there was a king who had five sons. Since he could not choose one of his sons as his successor, he decided that after his death the kingdom should be divided into five parts in such a way that each part had a common border with each other. Can this condition be fulfilled? Problems of this kind are not taken up by other mathematicians until a few years later, as e.g. the four colouring of maps as asked by Francis Guthrie. The answer, of course, is negative and easy to show.

It took him about 10 years to write his famous geometry book “Der barycentrische Calcul – ein neues Hilfsmittel zur analytischen Behandlung der Geometrie” (1827) and it was a great success in the scientific community in Germany and beyond. In it he developed the “theory of geometric relationships of figures” (equality, similarity, affinity, collineation), which was later used by Felix Klein to classify the various geometric approaches (Erlanger Program).[7] Further publications by August Möbius in the field of mathematics and astronomy were also quite influential and caused him a pretty good reputation during his lifetime. Möbius wrote numerous extensive treatises and writings on astronomy, geometry and statics. He made valuable contributions to analytic geometry, including the introduction of homogeneous coordinates and the principle of duality. He is regarded as a pioneer of topology. One of the most important mathematical objects, Möbius worked on was the famous “Möbius Strip”.

A photograph of a green paper Möbius strip.

The “Möbius strip” in general is a surface with just one side and one boundary component. A Möbius strip is a two-dimensional surface with only one side. It can be constructed in three dimensions as follows. Take a rectangular strip of paper and join the two ends of the strip together so that it has a 180 degree twist. It is now possible to start at a point A on the surface and trace out a path that passes through the point which is apparently on the other side of the surface from A. Also, it has the mathematical property of being non-orientable. Johann Benedict Listing and August Möbius discovered this independently from each other in 1858, still, the object was named after Möbius. This work played and plays a significant role in physics, philosophy, chemistry and even certain double helix are structured as a Möbius strip. Möbius also contributed to the development of various areas of mathematics in numerous smaller articles. The Möbius geometry, the Möbius function, and the Möbius transformation are also named after him.