You are here: Home › engineering › The Aswan High Dam – the Eighth Wonder of the World

A Panorama of Aswan Dam

On July 21, 1970, the construction of the Egyptian Aswan High Dam was completed. A key objective of the Egyptian Government following the Egyptian Revolution of 1952, the dam has the ability to control floods, provide water for irrigation, and generate hydroelectricity were seen as pivotal to Egypt’s industrialization. The High Dam was constructed between 1960 and 1970, and has had a significant effect on the economy and culture of Egypt. Soviet leader Nikita Khrushchev referred to it as “the eighth wonder of the world”. 22 ancient Egyptian monuments and architectural complexes, including the Abu Simbel temples, that were threatened by flooding were preserved by moving them under an UNESCO Campaign.

The Floods of the Nile

Before the dams were built, the Nile flooded every year during late summer, when water flowed down the valley from its East African drainage basin. These floods brought high water and natural nutrients and minerals that annually enriched the fertile soil along the floodplain and delta; this had made the Nile valley ideal for farming since ancient times. Because floods vary, in high-water years the whole crop might be wiped out, while in low-water years widespread drought and famine occasionally occurred. As Egypt’s population grew and conditions changed, both a desire and ability developed to control the floods, and thus both protect and support farmland and the economically important cotton crop. With the reservoir storage provided by the Aswan dams, the floods could be lessened and the water stored for later release.

The British and the First Dam

The British began construction of the first dam across the Nile, the so-called Aswan Low Dam in 1898, which was opened on 10 December 1902. When initially constructed between 1899 and 1902, nothing of its scale had ever been attempted; on completion, it was the largest masonry dam in the world. The dam, originally limited in height by conservation concerns, worked as designed, but provided inadequate storage capacity for planned development and was raised twice, between 1907–1912 and again 1929–1933. These heightenings still did not meet irrigation demands and in 1946 it was nearly over-topped in an effort to maximize pool elevation. This led to the investigation and construction of the Aswan High Dam 6 kilometres upstream.

The Egyptian government of King Farouk showed no interest in the first plans, but the Egyptian position changed completely with the overthrow of the monarchy, led by the Free Officers Movement including Gamal Abdel Nasser. While opposed both to communism, capitalism, and imperialism, Nasser presented himself as a tactical neutralist, and sought to work with both the United States and the Soviet Union for Egyptian and Arab benefit. Nasser negotiated as well with the United States as with the Soviet Union, since he also intended to achieve a weapons deal to support Egypt in the war against Israel. In June 1956, the Soviets offered Nasser $1.12 billion at 2% interest for the construction of the dam. On 19 July the US State Department announced that American financial assistance for the High Dam was “not feasible in present circumstances.”

The Temple of Abu Simbel

Archaeologists began raising concerns that several major historical sites, including the famous temple of Abu Simbel were about to be under water. A rescue operation began in 1960 under UNESCO. The construction of the high dam lasted from 1960 to 1970. The Aswan High Dam is 3,830 metres long, 980 m wide at the base, 40 m wide at the crest and 111 m tall. It contains 43,000,000 cubic metres of material. At maximum, 11,000 cubic metres per second of water can pass through the dam. The High Dam has resulted in protection from floods and droughts, an increase in agricultural production and employment, electricity production and improved navigation that benefits tourism. Conversely, the dam flooded a large area, causing the relocation of over 100,000 people. Many archaeological sites were submerged while others were relocated. The dam is blamed for coastline erosion, soil salinity and health problems. 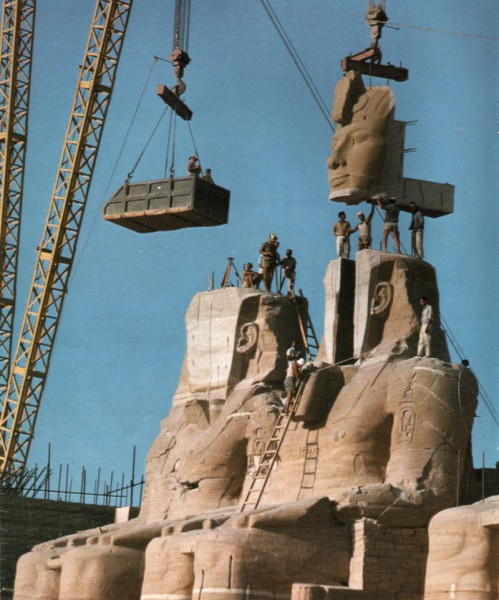 The statue of Ramses the Great at the Great Temple of Abu Simbel is reassembled after having been moved in 1967 to save it from flooding.

22 monuments and architectural complexes, including the Abu Simbel temples, that were threatened by flooding from Lake Nasser were preserved by moving them to the shores of Lake Nasser under the UNESCO Nubia Campaign. Also moved were Philae, Kalabsha and Amada. Other monuments were granted to countries that helped with the works (such as the Debod temple in Madrid, the Temple of Taffeh in Leiden and the Temple of Dendur in New York). The remaining archaeological sites, including the Buhen fort have been flooded by Lake Nasser. Most famous was the relocation the the Abu Simbel temples, two massive rock temples at Abu Simbel, a village in Nubia, southern Egypt, near the border with Sudan. They are situated on the western bank of Lake Nasser, about 230 km southwest of Aswan. The twin temples were originally carved out of the mountainside during the reign of Pharaoh Ramesses II in the 13th century BC, as a lasting monument to himself and his queen Nefertari, to commemorate his victory at the Battle of Kadesh.[4] The complex was relocated in its entirety in 1968, on an artificial hill made from a domed structure, high above the Aswan High Dam reservoir. the entire site was carefully cut into large blocks (up to 30 tons, averaging 20 tons), dismantled, lifted and reassembled in a new location 65 meters higher and 200 meters back from the river.

The Aswan High Dam has produced several negative side effects, however, chief of which is a gradual decrease in the fertility and hence the productivity of Egypt’s riverside agricultural lands. This is because of the dam’s complete control of the Nile’s annual flooding. Much of the flood and its load of rich fertilizing silt is now impounded in reservoirs and canals; the silt is thus no longer deposited by the Nile’s rising waters on farmlands.[2] The reduction of waterborne nutrients flowing into the Mediterranean is suspected to be the cause of a decline in anchovy populations in the eastern Mediterranean. The end of flooding has sharply reduced the number of fish in the Nile, many of which were migratory. Lake Nasser, however, has been stocked with fish, and many species, including perch, thrive there.[3]

E. Christiana Köhler, On the origins of Ancient Egyptian civilization, [6]