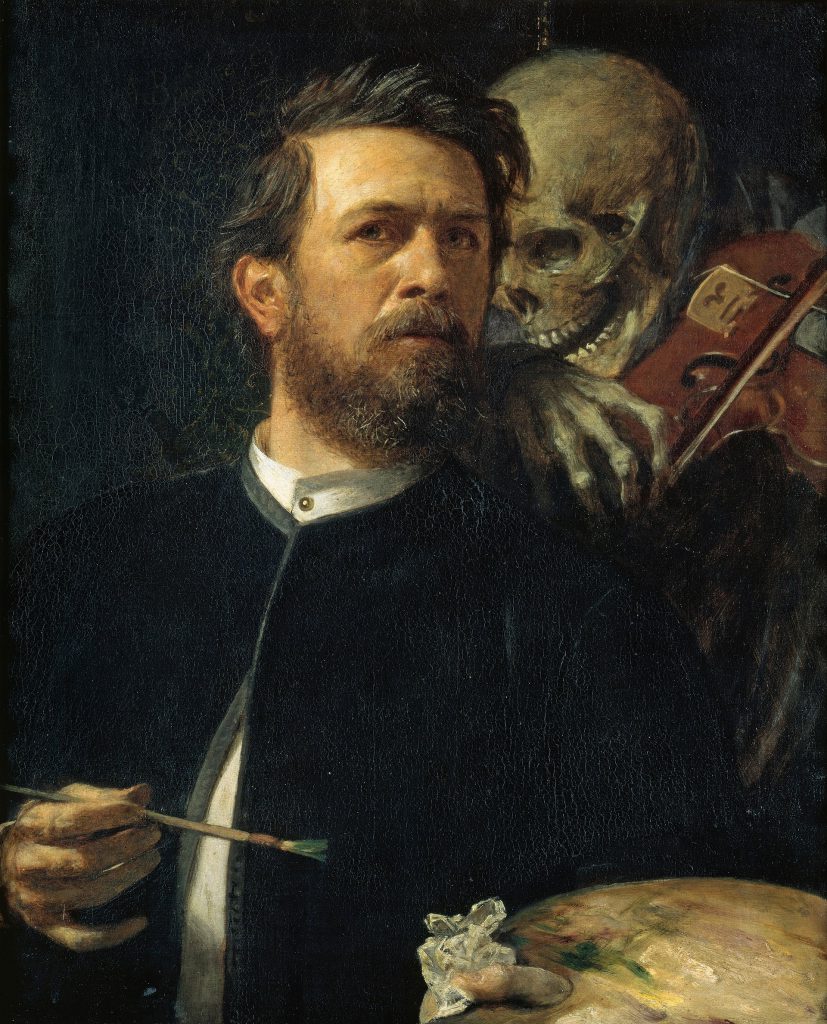 “Portraiture is the most miserable genre of painting, because in it the artist is most bound.”
– Arnold Böcklin: Waetzold 19th century

Arnold Böcklin was the son of the silk manufacturer Christian Friedrich Böcklin and grew up in the Steinenvorstadt in Basel, Switzerland. He received drawing lessons in Basel and studied at the Düsseldorf Art Academy from 1845 to 1847 under Johann Wilhelm Schirmer, Theodor Hildebrandt and Rudolf Wiegmann. In 1847 he went on a study trip to Belgium with Rudolf Koller, where he was greatly impressed by the works of Peter Paul Rubens.[1] Further trips took him to Switzerland and the Netherlands. In 1848 he went to Paris with Rudolf Koller and made studies in the Louvre. This was followed by work in the studio of Johann Gottfried Steffan. Until 1850 he worked in Basel, where he painted his first characteristic landscapes.

From 1850 to 1857 he worked intermittently in Rome, where he studied the Old Masters. During his seven-year stay there, he was under the strong influence of Gaspard Dughet and Franz-Dreber. In 1853 Böcklin married Angela Pascucci, the model for many of his paintings, and moved to Basel in 1857. In 1856 Böcklin stayed in Munich and in 1858 – after recommendation by Anselm Feuerbach – was commissioned by the Hanoverian consul in Palermo Karl Wedekind to paint the dining room in his villa in Hanover. He became widely known for his painting Pan im Schilf (Pan in the Reeds) in March 1859. From 1860 to 1862, sponsored by Count Adolf Friedrich von Schack, he taught as a professor at the Grand Ducal Saxon School of Art in Weimar. The Hunt of Diana was his first major commission in 1862.

The Way to Success

In 1861 he was in Rome and visited Naples and Pompei. During this time he completed his distinctive style with the clear contours and intense luminosity of his colors, through which he illustrated in his paintings a world of mythological mythical creatures. Böcklin returned from Rome to Basel with his family in 1866. Jacob Burckhardt commissioned him in 1868 to decorate a garden room of his house in Basel with three frescoes for Karl Sarasin. Böcklin asked Rudolf Schick to assist him in the execution. Within two months, the three murals Resting on the Flight into Egypt, King David with the Harp, and The Walk to Emmaus were completed. They are now in the Kunstmuseum Basel.

The Island of the Dead

The Isle of the Dead is the name of five paintings by Arnold Böcklin with the almost identical motif of a cypress-covered island. They were created between 1880 and 1886. The motif is probably the best known of the painter and at the same time had a varied and enduring history of influence. The painting is strongly autobiographical; the theme of death always played a significant role in Böcklin’s life as well as in his works. He lost eight of his fourteen children; he contracted typhoid fever and suffered a stroke. From the third version Böcklin provided one of the burial chambers in the rocks with his initials. The morbid atmosphere of The Isle of the Dead quickly established a great popularity in the fin de siècle, which has lasted until today. Some see The Isle of the Dead as a swan song to European culture on the cusp of the mechanized 20th century. The paintings had a great influence on later painters; there are countless “reinterpretations” to this day.

In 1871 Böcklin created six masks for the garden facade of the Kunsthalle Basel, and in the same year he stayed in Munich until 1874, where he painted Self-Portrait with Death Playing a Fiddle in 1872. From the fall of 1874 to April 1885, he lived in Florence, mostly in the studio house of Vladimir von Swertschkoff. Here he produced five versions of the painting The Isle of the Dead.

In 1875 Louis Sussmann-Hellborn bought Böcklin’s painting Meeresidylle (also Triton and Nereide) for 10,000 marks (later in the National Gallery, lost since 1945). Böcklin had a lifelong yearning to fly. He constructed his first flying machine around 1855[ and tested it in Rome. Gustav Adolf zu Hohenlohe-Schillingsfürst, then Monsignor and later German Cardinal of the Curia in Rome, obtained permission from Pope Pius IX to try out the flying machine in the great hall of the papal riding school. The Inquisition of the time obtained a warrant for Böcklin’s arrest; he fled Rome. Around 1883, Böcklin stayed in Berlin and failed in his attempt at motorless flight on Tempelhofer Feld.

From 1885 to 1892 he lived in Hottingen near Zurich, where he had a studio building built for him at what is now Böcklinstrasse 17 by the Zurich architecture professor Georg Lasius. Gottfried Keller was often a guest there. After a stroke in 1892, he settled with his wife and sons near Florence and later moved into his estate Villa Bellagio in Fiesole. Louise Stadler’s “Stadler School of Art” took over Böcklin’s studio. In 1897, on his 70th birthday, Böcklin’s works were shown at the Kunsthalle Basel, likewise 30 years later, in 1927, on his 100th birthday. Böcklin died on his estate and was buried on January 18, 1901 in the Protestant cemetery Cimitero Evangelico agli Allori near Florence. The grave had been designed by his son Carlo; it bore the inscription from Horace‘s ode “Non omnis moriar“:

Influenced by Romanticism, Böcklin’s symbolist use of imagery derived from mythology and legend often overlapped with the aesthetic of the Pre-Raphaelites. Many of his paintings are imaginative interpretations of the classical world, or portray mythological subjects in settings involving classical architecture, often allegorically exploring death and mortality in the context of a strange, fantasy world. Böcklin’s color, both because it is prepared by hand and because it attracts the eye with a “sucking pictorial result”, is far from the immediacy of the plein air praised by the Impressionists at the time and rather penetrates psychology in a way, so to speak, more musical than visual and the timbral character recalls the art of the primitives. From the lively chromaticism of Böcklin’s works spring undeniable musical qualities. Böcklin himself was interested in music and his ear was so fine that it allowed him to repeat a melody even after hearing it only once: he also enjoyed playing the transverse flute, the drum and the harmonium.