You are here: Home › archeology › Arthur Evans and the Palace of Knossos 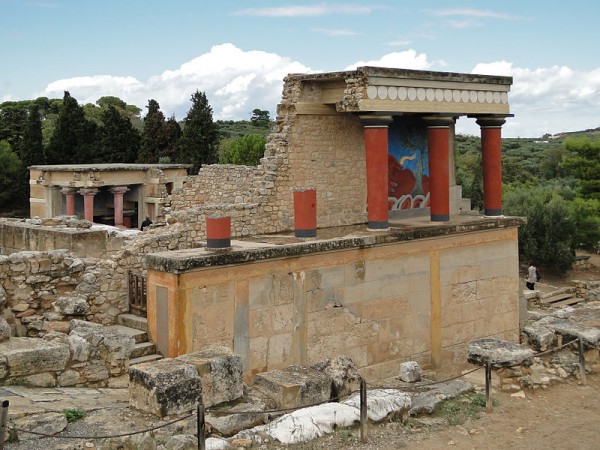 On July 8, 1851, English archaeologist Sir Arthur Evans was born. Evans was a pioneer in the study of Aegean civilization in the Bronze Age. He is most famous for unearthing the palace of Knossos in Crete. He continued Heinrich Schliemann‘s concept of a Mycenaean civilization, but found that he needed to distinguish another civilization, the Minoan, from the structures and artifacts found there and throughout the eastern Mediterranean.

Arthur Evans attended Brasenose College, Oxford and during the summers, he and his brother Lewis visited Hallstatt, where his father, a distinguished archaeologist himself, had excavated in 1866, adding some of the artifacts to his collection. The young men further traveled to Paris and Amiens. Shortly after the Franco-Prussian War, Arthur and Lewis hunted for stone-age artifacts in the gravel quarries. In 1873 he and Francis Balfour tramped over Lapland, Finland, and Sweden. Everywhere he went he took copious anthropological notes and made numerous drawings of the people, places and artifacts. In 1874, Arthur Evans graduated from Oxford and applied for the Archaeological Traveling Studentship offered by Oxford but was rejected. Evans applied for a summer term at the University of Göttingen. On the way to Göttingen, Arthur was sidetracked, unpropitiously for the modern history plan, by some illegal excavations at Trier. He had noticed that the tombs were being plundered surreptitiously. For the sake of preserving some artifacts, he hired a crew, performed such hasty excavations as he could, crated the material and sent it home. As Arthur did not like it in Göttingen, he left for another trip to the Balkans, which marked the end of his formal education. Arthur Evans was appointed Keeper of the Ashmolean Museum in 1884 and a few years later, a cemetery of the British Iron Age at Aylesford in Kent was excavated under the leadership of Evans.

A Script leading to Crete

After some troubleful years, Artur Evans increased his interest for Crete. Knossos was now known to be a major site, thanks to Arthur’s old friend and fellow journalist in Bosnia, William James Stillman. Another old friend, Federico Halbherr, the Italian archaeologist and future excavator of Phaistos, was keeping him posted on developments at Knossos by mail. Arthur discovered the script on some other jewellery that came to the museum from Myres in Crete. He announced that he had concluded to a Mycenaean hieroglyphic script of about 60 characters. Shortly he wrote to his friend and patron at the Ashmolean, Charles Fortnum, that he was “very restless” and must go to Crete. 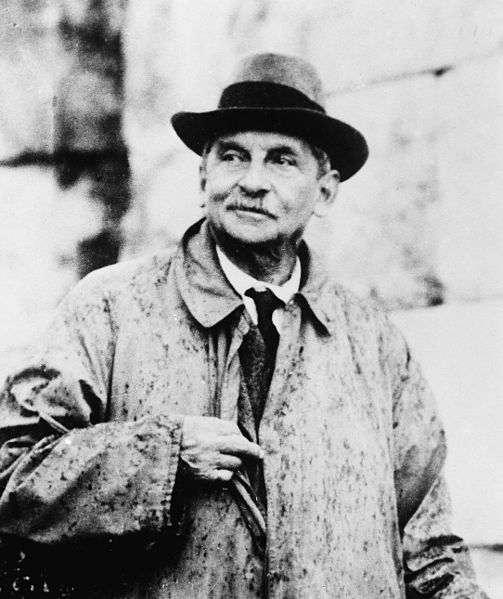 A Controversial Character in Crete

Arriving in Heraklion he did not join his friends immediately, but took the opportunity to examine the excavations at Knossos. Seeing the sign of the double axe almost immediately he knew that he was at the home of the script. He bought 1/4 of the site with first option to buy the rest later. In 1898, the last of the Turkish troops withdrew from Crete. However, the political situation was still tense and checkpoints were established everywhere. Arthur, Myres and Hogarth returned to Crete together, Arthur this time as correspondent for the Manchester Guardian, a role in which he reveled. His sharp tongue had not mellowed over the years. He was once again the Pen-viper, but this time there was no administration to cage him. He criticized the Ottoman Empire for its corruption, as usual. Then he criticized the British Empire for its collaboration with the Ottoman. Many officials of that empire had been Greek. Now they were working with the British trying to build a credible Cretan government. For them Arthur invented a new and eloquent term, “the Turco-British regime”. He criticised the Muslims for attacking the Christians, and the Christians for attacking the Muslims. He collided with the British military, complaining vociferously to the British higher authorities.

After the new Cretan government was established, there was a great rush on the part of all the other archaeologists to obtain first permission to dig. They soon found that Arthur had a monopoly. Using the Cretan Exploration Fund, now being swollen by contributions from others, he paid off the debt for the land. Then he ordered stores from Britain. He hired two foremen, and they hired 32 diggers. He started work on the flower-covered hill in March 1900. Assisted by Duncan Mackenzie, who had already distinguished himself by his excavations on the island of Melos, and Mr Fyfe, an architect from the British School at Athens, Evans employed a large staff of local labourers as excavators, and began work in 1900. Within a few months they had uncovered a substantial portion of what he called the Palace of Minos. Knossos was an intricate collection of over 1000 interlocking rooms, some of which served as artisans’ workrooms and food processing centres. It served as a central storage point, and a religious and administrative centre.

On the basis of the ceramic evidence and stratigraphy, Evans concluded that there was another civilization on Crete that had existed before those brought to light by the adventurer-archaeologist Heinrich Schliemann at Mycenae and Tiryns.[4]  The small ruin of Knossos spanned 5 acres and the palace had a maze-like quality that reminded Evans of the labyrinth described in Greek mythology. In the myth, the labyrinth had been built by King Minos to hide the Minotaur, a half-man half-bull creature that was the offspring of Minos’s wife, Pasiphae, and a bull. Evans dubbed the civilization once inhabiting this great palace the Minoan civilization.

During excavations by Evans, he found 3000 clay tablets, which he transcribed and organized, publishing them in Scripta Minoa. As some of them are now missing, the transcriptions are the only source of the marks on the tablets. He perceived that the scripts were two different and mutually exclusive writing systems, which later he termed into Linear A and Linear B.[6] The A script appeared to have preceded the B. Evans dated the Linear B Chariot Tablets, so called from their depictions of chariots, at Knossos to immediately prior to the catastrophic Minoan civilization collapse of the 15th century BC.

Most of the palace was excavated by 1903, bringing to light an advanced city containing artwork and many examples of writing. Painted on the walls of the palace were numerous scenes depicting bulls, leading Evans to conclude that the Minoans did indeed worship the bull. In 1905 he finished excavations. He then proceeded to have the room called the throne room (due to the throne-like stone chair fixed in the room) repainted by a father-and-son team of Swiss artists, the Émile Gilliéron Junior and Senior. While Evans based the recreations on archaeological evidence, some of the best-known frescoes from the throne room were almost complete inventions of the Gilliérons, according to his critics.

Evans had found objects from Knossos exhibited in London in 1903 and received recognition for them. In 1911, the British King George V knighted him. Evans led the excavations in Crete until 1935. In the same year he completed his six-part scientific work on his discoveries (“The Palace of Minos“, 1921-35; an index volume by Joan Evans followed in 1936). Sir Arthur Evans died on July 11, 1941 shortly after his 90th birthday.

Colin MacDonald ‘Sir Arthur Evans – Excavator of Knossos’ lecture given at the BSA, [9]