You are here: Home › physics › Georges Lemaître and the Origins of the Big Bang Theory 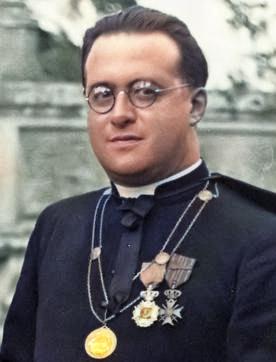 On June 20, 1966, Belgian priest, astronomer and professor of physics Georges Lemaître passed away. He was the first person to propose the theory of the expansion of the Universe, widely misattributed to Edwin Hubble, and is best known for his proposal of what became known as the Big Bang theory of the origin of the Universe.

“We want a fireworks theory of evolution. The last two thousand million years are slow evolution: they are the smoke and ashes of bright but very rapid fireworks.”
– George Lemaitre, Article in Nature, 1931, vol 128, page 704

Maybe, if you are interested in astronomy, you might have heard about famous astronomer Edwin Hubble and the theory of the expanding universe.[6] But even I didn’t know that Hubble adapted his theory from the original ideas of George Lemaître. But, who was this Belgian priest with these profound insights about our universe? George Lemaître was born on July 17, 1894 in the Belgian town of Charleroi. After a classical education at the Collège du Sacré-Coeur, a Jesuit secondary school, he began studying civil engineering at the Catholic University of Leuven at the age of 17. In 1914, he interrupted his studies to serve as an artillery officer in the Belgian army at World War I, where he received the Belgian War Cross with palms. After the war, he studied physics and mathematics, obtaining his PhD in 1920 with a thesis on L’approximation des fonctions de plusieurs variable réelles (approximation of functions of several real variables). Guided by his war experiences, he also enrolled in the seminary of the archdiocese of Mechelen. In 1923, he was ordained a priest.

In 1923, he became a graduate student in astronomy at the University of Cambridge, working with physicist Arthur Eddington who initiated him into modern cosmology, stellar astronomy, and numerical analysis. After spending a year at Harvard College Observatory in Cambridge and at the Massachusetts Institute of Technology, he returned to Belgium in 1925, where he became a part-time lecturer at the Catholic University of Louvain. There he worked on the publication of his most famous paper “A homogeneous Universe of constant mass and growing radius accounting for the radial velocity of extragalactic nebulae“, where he presented his new idea of an expanding Universe. Actually, he also derived Hubble’s law and provided the first observational estimation of the Hubble constant, two years earlier than the work of Edwin Hubble, to whom the concept of the expansion of the universe has been attributed, and after the corresponding work of the Russian mathematician Alexander Alexandrovich Friedmann, who died in 1925, who first found this solution to Einstein’s field equations according to today’s state of knowledge.[7] Friedmann’s works were probably not known to Georges Lemaître, but Albert Einstein, who also commented on them, did.[8]

But, when the universe is expanding, how did it begin its expansion and what was its initial size? Up to this point in time, Lemaître supposed the initial state as a finite-size static universe based on Einstein’s model. Unfortunately, the paper had little impact because it was not widely read by astronomers outside of Belgium. Even after translating the paper into English with the help of Arthur Eddington, for some unknown reasons the part with the Hubble constant didn’t occur in the English version.[5] It was not until 1931 that Lemaîtres published an essay in English in which he introduced the idea of the Big Bang as the quantum physical beginning of cosmic expansion into cosmology,  but shortened by the decisive passages concerning the Hubble constant and calculations about the expansion rate of the universe. Although Lemaître never attempted to claim a first discoverer’s right, the International Astronomical Union (IAU), the world’s largest astronomers’ association with some 12,000 members, voted in October 2018 to name the Hubble relation, which describes the relationship between distance and speed, the Hubble-Lemaître relationship.

The Cosmic Egg Exploding at the Moment of Creation

Finally, after Eddington published a paper commenting Lemaître’s work as being a “brilliant solution” to the outstanding problems of cosmology, Lemaître was invited to London, where he proposed that the Universe expanded from an initial point, which he called the “Primeval Atom” and developed in a report published in Nature. Lemaître himself also described his theory as “the Cosmic Egg exploding at the moment of the creation“, but it became better known as the “Big Bang theory” a pejorative term coined by Fred Hoyle who was a proponent of the steady state universe.[4] Lemaître’s proposal met skepticism from his fellow scientists at the time. Eddington found it unpleasant, while Albert Einstein found it suspect because he deemed it unjustifiable from a physical point of view. But, when Einstein and Lemaître met at a series of conferences and seminars, where Lemaître found sufficient time to explain his ideas in sufficient detail, it is reported that Einstein stood up, applauded, and said, “This is the most beautiful and satisfactory explanation of creation to which I have ever listened.“

Lemaître received various honors and prizes for his scientific work, as e.g., the Francqui Prize, the highest Belgian scientific distinction. He inevitably also dealt with the question of the compatibility of Catholic creation doctrine and scientific big bang theory.  In 1936, he was elected member of the Pontifical Academy of Sciences. He took an active role there, becoming its president in March 1960 and remaining so until his death. In 1941, he was elected member of the Royal Academy of Sciences and Arts of Belgium, and in 1953, he was given the inaugural Eddington Medal awarded by the Royal Astronomical Society. At a conference in November 1951, the Pontifical Academy of Sciences accepted Lemaîtres’ theory. Pope Pius XII gave a concluding lecture in which he explained that the beginning of the world, which could be fixed in time with the Big Bang, originated from a divine act of creation. In the 1950s, Lemaître followed with great interest the advent of electronic computers.Lemaître was the first theoretical cosmologist ever nominated in 1954 for the Nobel Prize in physics for his prediction of the expanding universe. Remarkably, he was also nominated for the 1956 Nobel prize in chemistry for his primeval-atom theory. In 1958, he had the first such apparatus installed at the University of Leuven. Throughout his life he remained a loner who did not maintain many contacts with fellow scientists. His correspondence is minimal. He died on 20 June 1966, shortly after having learned of the discovery of cosmic microwave background radiation, which provided further evidence for his intuitions about the birth of the Universe.

The Biggest Questions in The Universe: An Introduction by Professor Joseph Silk, [12]