You are here: Home › archeology › The Successful Salvage of the Unfortunate Vasa 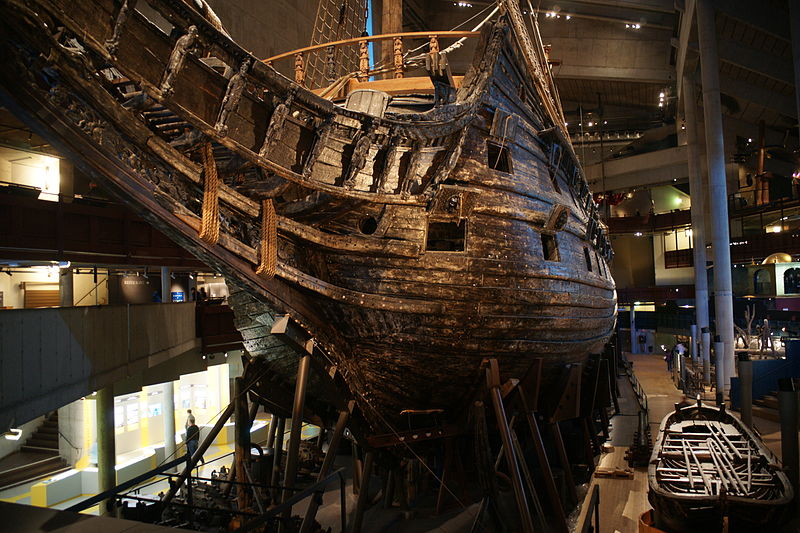 The Vasa, photo by Javier Kohen

On the morning of 24 April, 1961, the Swedish warship Vasa was salvaged with a largely intact hull after it had sunk after sailing less than a nautical mile (ca 2 km) into its maiden voyage on 10 August 1628 at Stockholm harbour.

A LArge Swedish Naval Presence in the Baltic

While Sweden counted rather as a poor and small country before the 17th century, the government established one of the most militarized states in the history of Europe through the years. However, during the thirty years war, Gustavus Adolphus was in power and he insisted in enlarging the naval presence in the Baltic, wherefore further ships had to be built.

The Need of Large Ships

Previously, the Swedish Navy preferred building smaller ships with light guns, but needed a fleet of larger ships to impose the opponents with Sweden’s military strength. Vasa was intended to be the first of five ships, and as the biggest of all supposed to carry 300 soldiers. During the years of building the ships, the shipyard faced economic problems and due to the fact that the Swedish Navy lost 10 ships in a storm, the king began hurrying the production.

Also during its building time, Gustavus Adolphus sent several new requirements for the ship. He ordered to install 72 24-pound canons, changed the size of the keel and the overall rigg. During a stability test in summer of 1628, several problems were noticed but the king, who had visited the Vasa only once in spring, kept sending letters and hurrying the construction. The impressive ornaments, statues and colors on board should support the ships authority, but in fact made it even heavier and harder to maneuver.

And then Disaster Strikes

Captain Söfring Hansson ordered Vasa to set sail on its maiden voyage to the naval station at Älvsnabben. It was a nice day with only a light breeze and the sails were set on the south side of the harbor. All gun ports were open in order to fire a salute while Vasa left Stockholm. As the wind caught in the sails, the ship suddenly heeled onto its port side wherefore the lower gun ports were pushed under water. The ship was now unable to straighten up and suddenly sank to a depth of 32 meters, 120 meters from shore. During the disaster, many came to help the endangered crew, but still around 50 were killed. Investigations to find someone to blame lasted for long, but in the end, nobody was sentenced. 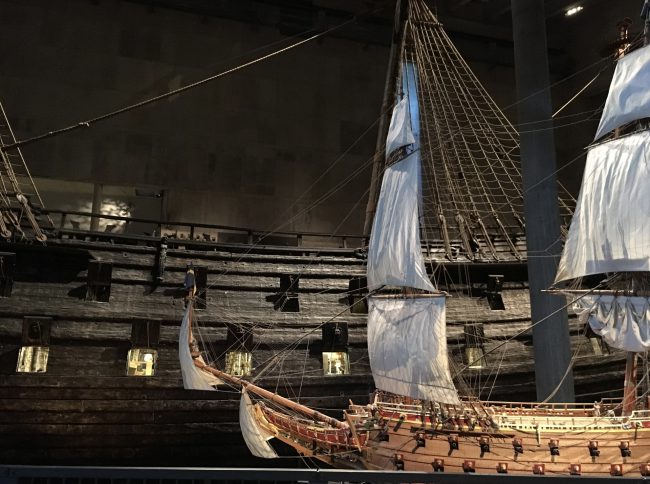 Already a few days after the catastrophe, officials began planning the later unsuccessful recovery of the ship. The salvage operations caused the ship to take much damage and natural forces under water also did their best demolish Vasa. At the very beginning of the 1960’s the ship was raised for the first time with the help of pontoons. It was a very dangerous process, in which 1300 divers were involved. After a while, mud was cleared off and the gun ports were closed. On April 24, 1961, the Vasa was able to break surface for the first time watched by hundreds of people from all over the world.

During excavations, the ship had to be kept wet so it would not crack and over 700 sculptures and 26000 artifacts were discovered. The ship itself among most of its found decorations are now exhibited in the famous Vasa museum in Stockholm. I visited Stockholm last year and of course I was also paying a visit to the Vasa museum. I can tell you that I really was very much impressed by the exhibition. They present not only the well preserved original ship but you can learn everything from planning, construction, the unfortunate maiden voyage, the salvage as well as about the ongoing archaeological work on the presented artifacts. If you ever visit Stockholm, this is a must.

Fred Hocker, The salvage of Vasa, [5]