You are here: Home › engineering › André Blondel and the Oscillograph 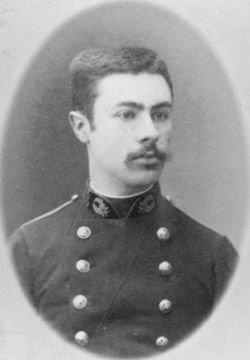 On August 28, 1863, French engineer and physicist André-Eugène Blondel was born. Blondel is the inventor of the electromechanical oscillograph, a device that allowed electrical researchers to observe the intensity of alternating currents, and a system of photometric units of measurement, such as the lumen and other new photometric units for use in photometry, based on the metre and the Violle candle.

André Blondel was the only son of Hippolyte Blondel (1823-1918)3 and Noémie Mielle (1839-1873), married in 1861 in Charolles. At age 10, he already lost his mother in May 1873. In 1883 his father, Hippolyte, then a councillor at the Court of Appeal of Dijon, was struck by the exclusion orders pronounced in favour of the provisional suspension of the irremovability of judges and admitted early to assert his pension rights. A student at the École polytechnique from 1883 to 1885, André Blondel graduated as major of the École des ponts et chaussées in 1888. At the same time, he obtained his degrees in mathematics and physics in 1885 and 1889 respectively. He was first attached to the secretariat of the General Council for Roads and Bridges for a year before becoming attached to the Central Lighthouse and Beacon Service on 1 October 1889. Chief Engineer 2nd class in 1908, then 1st class in 19127, he remained in the Lighthouse Service until his retirement in 1927.

The Bifilar and Soft Iron Oscillographs

In 1892/93, Blondel became professor of applied electricity at the École des Mines then created the first course of applied electricity at the École des Ponts et chaussées. During the early 1890s, André Blondel attempted to solve the problem of integral synchronization, using the theory proposed by French physicist Marie Alfred Cornu. He managed to determine the conditions under which the curve traced by a high-speed recording instrument would follow as closely as possible the actual variations of the physical phenomenon being studied. This led Blondel to invent the bifilar and soft iron oscillographs.

A better Understanding of Alternating Currents

André Blondel demonstrated these devices at the St. Louis Exposition in 1904 where they won the grand prize. Blondel’s devices turned out to be more powerful than the existing classical stroboscope and remained the best way to record high-speed electrical phenomena for more than 40 years. Later on, they were replaced by the cathode ray oscilloscope. Blondel was able to significantly contribute to the way of better understanding of the behavior of alternating current.

Blondel also built a theory of rectification with asymmetrical electrodes. He demonstrated that there were three kinds of electric arc: the primitive arc of William Duddell, the secondary arc of Valdemar Poulsen, and a succession of oscillatory discharges. He proposed lumen and other new measurement units for use in photometry, based on the metre and the Violle candle.

In 1899, André Blondel published his “Empirical Theory of Synchronous Generators“. In it, he discussed the basic theory of the two armature reactions (direct and transverse). It was used to explain the properties of salient-pole AC machines. About ten years later, he worked on one of the first long distance schemes for the transmission of AC power. Back then a large 300,000 hp hydroelectric power plant at Genissiat on the Rhône was created with André Blondel’s contribution that transmitted electrical power to Paris more than 350 km away using polyphase AC current at 120 kV.

Blondel’s contributions to science also include wireless telegraphy, acoustics, and mechanics; he also developed proposals for a theory of the induction motor. He was made a member of the French Academy of Sciences in 1913. In 1914 he performed a series of experiments in order to determine what was the most general law of electromagnetic induction. He was appointed commander of the Légion d’honneur in 1927, and was awarded the Faraday Medal in 1937. He also received the medal of the Franklin Institute, the Montefiore award and Lord Kelvin award. André Blondel died in Paris on 15 November 1938 at age 75.