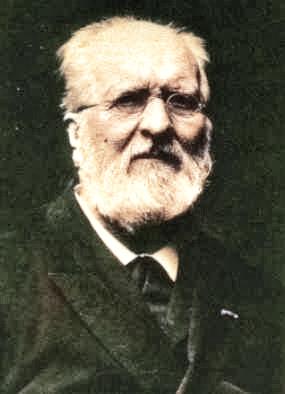 On August 29, 1821, French archaeologist and anthropologist Louis Laurent Gabriel de Mortillet was born. De Morillet was the first to organize man’s prehistoric cultural developments into a sequence of epochs. Based on the idea that older specimens of man were more primitive structurally and culturally, he created a ladder-like model of the evolution of man. This model was the basis for the idea of linear evolution of men.

A Revolutionary Freethinker and Scientist

De Mortillet was educated at the Jesuit college of Chambéry and at the Paris Conservatoire, where he became a revolutionary freethinker.[4] Becoming in 1847 proprietor of La Revue indépendante, he was implicated in the Revolution of 1848 and sentenced to two years’ imprisonment for violating the laws governing the press. He fled the country and during the next fifteen years lived abroad, chiefly in Switzerland, the Savoy, and Italy, where he engaged in scientific and archaeological work. His scientific work was concerned mainly with zoology (particularly the study of mollusks) and geology. He organized and classified the material in the museums of Geneva and Annecy. In addition to many scientific papers he was author of the Guide de l’étranger en Savoie (Chambéry, 1856), generally accepted as a model of its kind and an early demonstration of his flair for popularization. Mortillet’s early studies of the geology and paleontology of the Alps were summarized in his Géologie et minéralogie de la Savoie (1858; “Geology and Mineralogy of Savoie”).

In 1858 he turned his attention to ethnological research, making a special study of the Swiss lake-dwellings together with Stoppiani and Édouard Desor. He also issued three works on the evidence for early man in North Italy, at Isolino (Isola di San Giovanni), on Lake Varese, in 1863, the third making a then unprecedented association with the Ice Age.

The Science of Early Man

He returned to Paris in 1864, at a period when the study of prehistoric man through the interpretation of archaeological remains was in its infancy. Lyell’s Antiquity of Man and Huxley’s Man’s Place in Nature, both published in 1863,[8] greatly affected Mortillet, and he decided to devote himself to the new and growing science of early man.[4] Also in 1864 he founded in Paris a new journal, Matériaux pour l’histoire positive et philosophique de l’homme, to discuss and summarize all new prehistoric discoveries.[4] Soon afterwards was appointed curator of the museum at St Germain. He became mayor of the town, and in 1885 he was elected deputy for Seine-et-Oise.

The first public recognition of prehistory at a scientific congress occurred at the meeting of the Italian Scientific Congress at La Spezia in 1865. Mortillet was invited by the president to give a survey of prehistory, and as a result it was decided to found an international congress of anthropology and prehistoric archaeology. Mortillet was secretary of the first two congresses, held in Neuchâtel in 1866 and in Paris the following year.[4]

Bringing Order to the Paleolithic

Mortillet is best known for his clarification and ordering of the archeology of the Paleolithic. Where Édouard Lartet had used fauna as a distinguishing feature for his important discoveries, Mortillet realised that as fauna varied with latitude they were unreliable indicators, and proposed instead a classification by means of dwelling places: Alluvial or Cave epochs, for example. Later acknowledging the ambiguity in that system as well, he published a new classification in 1869, using type sites and their associated artifacts to distinguish and name periods:

Mortillet’s system may have subsequently been refined, but still remains in current use. However, whereas Mortillet believed his classifications were universal stages, with an unilineal evolution, later thinking regards each culture as a more localised conglomerate, capable of overlapping in time with others, not necessarily lineally related.

Aside from anthropological studies, Mortillet led a very active political career. He was elected to the Chamber of Deputies, in Paris, where he represented the working class. His political career was often controversial with his strong, out of the main stream, ideas. He often used evolution as a stepping stone to preach his political views.[5]

Mortillet’s early studies of the geology and paleontology of the Alps were summarized in his Géologie et minéralogie de la Savoie (1858; “Geology and Mineralogy of Savoie”). He joined the staff of the Museum of National Antiquities, Saint-Germain-en-Laye (1868), was assistant curator for 17 years, and was professor of prehistoric anthropology at the School of Anthropology in Paris (1876–98). His classifications, elaborated in Le Préhistorique: antiquité de l’homme (1882; “The Prehistoric: Man’s Antiquity”), were revised in subsequent editions of the work.[2]