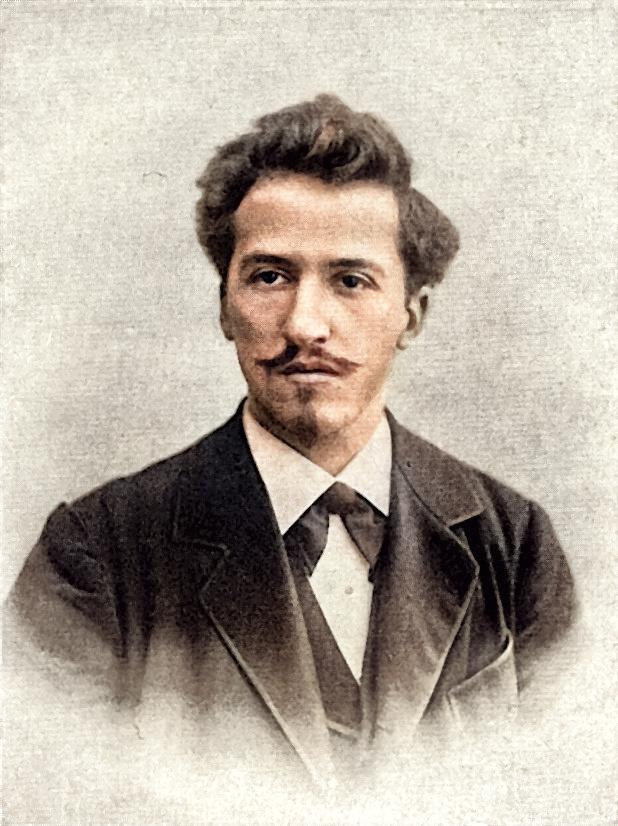 On March 7, 1872, Dutch Painter Pieter Cornelis Mondriaan was born. Mondrian is regarded as one of the greatest artists of the 20th century. He is known for being one of the pioneers of 20th century abstract art, as he changed his artistic direction from figurative painting to an increasingly abstract style, until he reached a point where his artistic vocabulary was reduced to simple geometric elements.

“A form must be of its own time if it is to be recognized: one cannot relate to what one is not or does not have – Thus all that is of the past is to be rejected.”
— quote in one of Mondrian’s Paris’ sketchbooks, [8]

Piet Mondrian was born as the second of five children in Amersfoort, Netherlands, the son of Pieter Cornelis Mondriaan (1839-1915) and his wife Johanna Christina Mondriaan. In 1880 the family moved to Winterswijk, near the German border. The mother was often ill, and the eldest daughter Christina had to “manage” the household as a barely eight-year-old. In 1886 he took drawing lessons from his uncle Frits Mondriaan, who was an esteemed landscape and interior painter, and his father. Mondrian was to become a teacher according to his father’s will, and Piet Mondrian aspired to the career of a drawing teacher. In 1889 and 1892 he acquired the teaching qualification for elementary schools and the teaching qualification as a drawing teacher for secondary schools. Since Mondrian did not feel called to be a teacher, however, he decided to begin his studies of art at the Rijksakademie van beeldende kunsten in Amsterdam in November 1892, which he continued until 1894, followed by evening courses until 1897.

In 1898 and 1901 he applied for the Dutch Prix de Rome, the most prestigious art prize in the Netherlands. The jury rejected him both times. After Piet Mondrian had sold two still lifes and executed a portrait commission, he travelled to Spain in 1901 with his friend, the painter Simon Maris. In 1904 he lived secluded in Uden, where he became more involved with theosophy, a process that would last until the end of his life. In 1905 Mondrian moved into his first studio in Amsterdam, where he produced mainly naturalistic works and scientific drawings for the University of Leiden until 1908. Together with Jan Toorop and Jan Sluijters, he was appointed to the board of the Modern Art Ring founded by the Dutch painter and art critic Conrad Kickert in 1910, which lasted until 1916. The death of his mother in the same year disturbed him, and his colour palette changed from bright, cheerful to gloomy bright colors.

From 6 October to 5 November 1911 the first exhibition of the Modern Art Ring took place in the Stedelijk Museum in Amsterdam with a total of 166 exhibits. Mondrian showed six works, including Evolution and The Red Mill. Through the exhibition, Mondrian came into contact with Cubism and joined this new art style. He left his homeland and, at the age of almost 40, moved to Paris at the end of December 1911. Here, on the Rue du Départ, Piet Mondrian lived and worked until January 1936, interrupted by the First World War. One of his studio neighbours was the Mexican painter Diego Rivera.

Back in the Netherlands

In July 1914 Mondrian stayed in the Netherlands, probably to visit his sick father. A return to Paris was no longer possible due to the onset of World War I, although the Netherlands was neutral to the war, and so he sought and found connection with the wealthy circles of Amsterdam. The art historian H. P. Bremmer, who advised the industrialist family Kröller-Müller in their promotion of artists, gave him an annual salary which he only received until 1919. The collectors no longer liked his radical abstraction.

The New Sculpture in Painting

In 1917 Mondrian was a founding member of the group De Stijl, based in Leiden; among them were the painters Bart van der Leck and Theo van Doesburg as well as the architect J. J. P. Oud. In the magazine of the same name he began to write a larger essay on “The New Sculpture in Painting“. In the next three years of the magazine he appeared both by the extent of his texts and by his commitment as the most important co-worker. 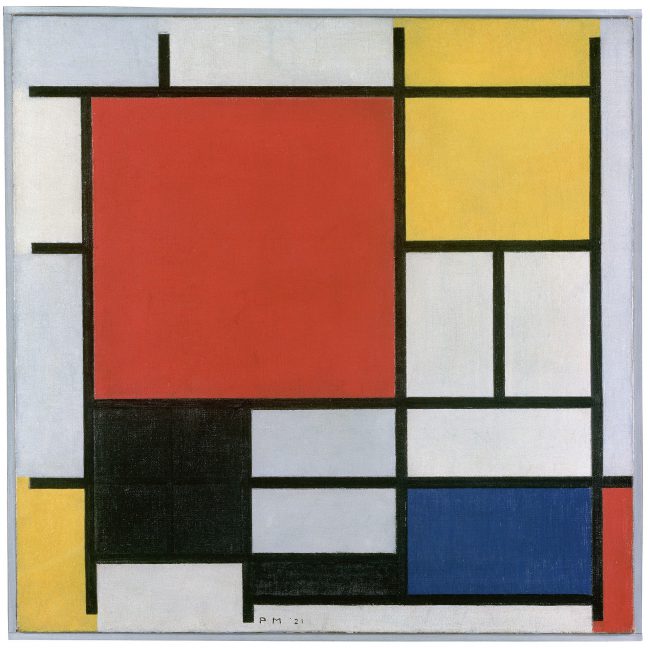 The Rise of Modernism

After the end of World War I Mondrian returned to Paris in February 1919. But the art scene had changed. Among other things, Picasso had returned to a more representational painting.[1] Mondrian with his abstract painting had become the most modern painter in his environment.  L’Effort Moderne by Léonce Rosenberg published Mondrian’s font Le Néo-Plasticisme in 1920. In 1925 it appeared as a translation in the Bauhaus books published by Walter Gropius. [2] In 1927 Mondrian published an article on new architecture in the avant-garde magazine i10, edited by the anarchist Arthur Lehning. In March 1936, the artist moved into a new studio.  After his work had already been shown in group exhibitions in London and Oxford, the American public could for the first time view a larger selection of Mondrian’s works in the exhibition Cubism and Abstract Art of 1936, organized by the Museum of Modern Art in New York. When the exhibition “Degenerate Art” opened in Munich in 1937, he was one of the few foreign artists whose work was defamed as “degenerate”. [3]

The Saint of Abstraction

In 1938, with the first signs of a coming war, Mondrian travelled to London on 21 September at the invitation of Ben Nicholson. In October 1940, after the German attack on London in September of that year, he emigrated to the USA with the support of Harry Holtzman. In New York, he joined the artists of abstract art who had united in the American Abstract Artists founded in 1936and published essays on neoplasticism. His first solo exhibition in the United States took place in January and February 1942. One photo shows Mondrian alongside 13 other artists such as Marc Chagall, Max Ernst, Fernand Léger, Roberto Matta, Kurt Seligmann and Yves Tanguy as well as the writer André Breton. In a letter to his father Henri Matisse, Pierre Matisse described Mondrian as the “saint of abstraction”. 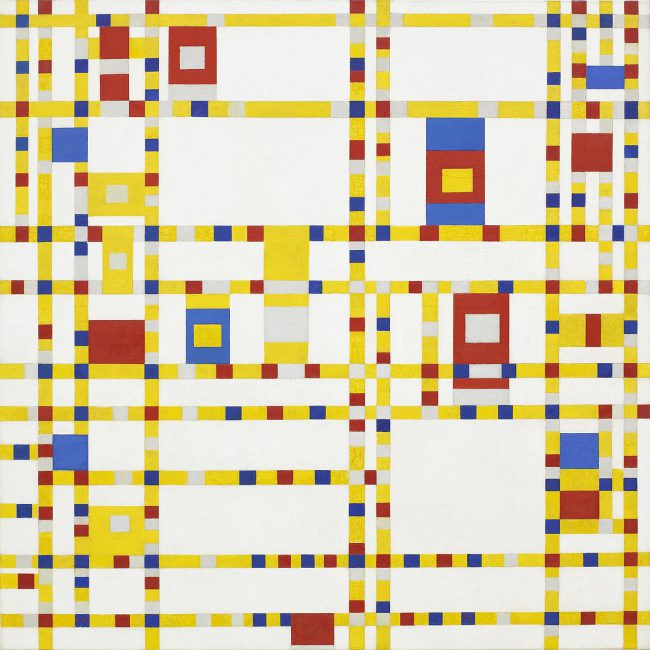 The primary colors red, yellow and blue, as well as the non-colors black, white and grey, appear in Mondrian’s paintings from around 1921. These are accentuated by vertical black lines and the right-angled color areas in the respective primary colors adjacent to the stripes. The remaining spaces are white. Color lines and rectangles are never arranged symmetrically, but are composed irregularly, rhythmically and dynamically. Thus, through the formal contrasts of the horizontal and vertical black lines and the continuous orthogonal pictorial structure, one color surface always appears as a contrast to the other colored and non-colored surfaces.

“The cultivated man of today is gradually turning away from natural things, and his life is becoming more and more abstract. Natural (external) things become more and more automatic, and we observe that our vital attention fastens more and more on internal things.”
— Piet Mondriaan, ‘Natural Reality and Abstract Reality’, 1919

Mondrian linked his paintings to a world view derived from the intellectual currents of the late 19th and early 20th centuries, especially theosophy. Behind the changeable phenomena of the world around us there is a true sphere of reality, which is recognizable through practice. It is a kind of model for a good life, a neatly designed world. The analogy between image and pure, ideal reality is that there are no “tragic, vain” forms (such as surfaces against a background, impure colors, mixed colors), but everything is solved in the balanced form. The right angle is the “only constant relationship to pure reality” and changing proportions represent life through their movement.