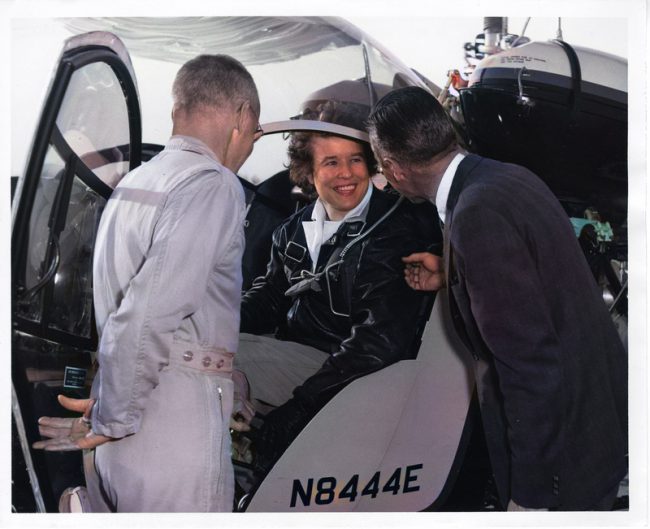 Dora Jean Dougherty Strother was born in St. Paul, Minnesota, and lived in Garden City Long Island, New York, and Winnetka, Illinois, before moving to Fort Worth. She earned her PhD in Aviation Education in 1955 at New York University. For her academic achievements, Strother earned the Amelia Earhart Award and in 1966 she was awarded the  Achievement Award by the American Association of University Women. In 1940, Strother received her pilot certificate via the Civilian Pilot Training Program. She became the sixth woman in the United States to earn an airline transport pilot license.

When women were allowed to attend training programs, two initial programs were established, the Women’s Auxiliary Ferrying Squadron (WAFS) and the 319th Women’s Flying Training Detachment (WFTD). Both programs were merged in 1943 as Women’s Airforce Service Pilots (WASP), which Strother joined. As part of her job, Strother participated in flight training, target towing for antiaircraft gunnery, ferrying, and radio control piloting. WASPs like Strother flew almost every type of plane used by Army Air Forces such as liaison, training, and cargo aircraft. They also flew and trained other pilots to fly fighters, dive bombers, attack bombers, and heavy bombers. She ferried planes, towed targets, and flew drones before she, along with Dorothea Johnson Moorman was asked by Col. Paul Tibbets  to learn how to fly the Boeing B-29 Superfortress heavy bomber. Tibbets is best known as the pilot who flew the B-29 known as the Enola Gay when it dropped Little Boy, the first of two atomic bombs used in warfare, on the Japanese city of Hiroshima.

Dora and Didi showed the much maligned bomber was “So easy to fly that even a women could do it.” Even though the plane was considered dangerous and cumbersome, Strother and Moorman flew the B-29 from Birmingham, Alabama, to Clovis, New Mexico. At their destination, the two women took male crews on flights and further trained them, demonstrating the feasibility of flying the B-29.

Dora Strother started working at the University of Illinois after the WASP was disbanded. There she taught primary, advanced, and instrument flight courses. In 1950, Strother studied Aviation Education earning her doctorate from New York University five years later. In 1958, she began working for Bell Aircraft as a human factors engineer, where she designed helicopter cockpits. She further developed expertise in helicopter flight and became a test pilot for Bell Helicopter company. During thirty-four hours of helicopter flight time, she set two world records for altitude (19,406 feet – 5,915 meters) and distance (straight line 404.36 miles – 650.75 kilometers). The record for altitude was set in a Bell 47G-3 helicopter. After Strothers retirement from Bell Helicopter as Chief of Human Factors Engineering and Cockpit Arrangement, she started serving as a member of the U.S. Army Science Board.