You are here: Home › biology › Rudolf Albert von Kölliker and the Origins of Embriology 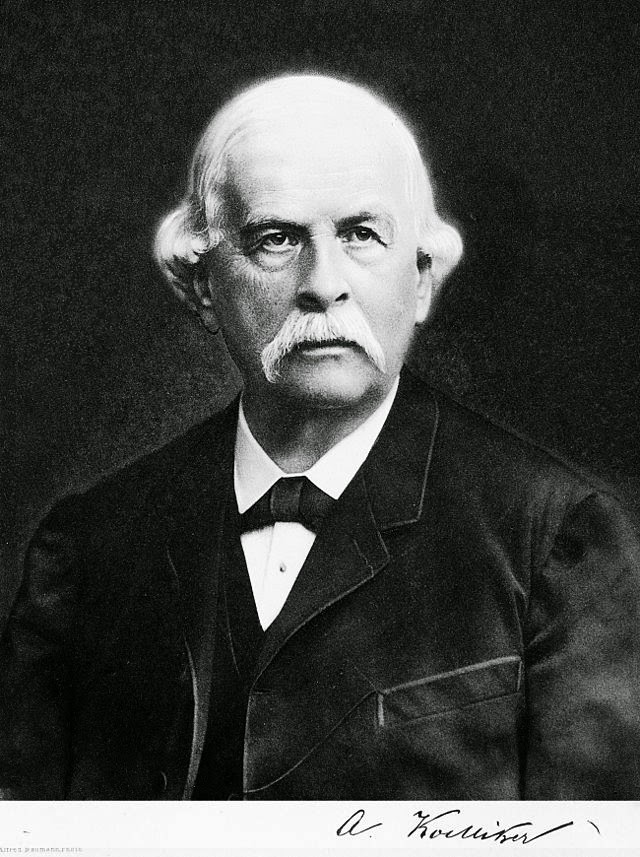 On July 6, 1817, Swiss anatomist and physiologist Rudolf Albert von Kölliker was born. He was one of the founders of embryology. His thorough microscopic work on tissues enabled him to be among the first to identify their structure. He showed that they were made up of cells, that did not freely come into being, but must develop from existing cells.

Rudolph Albert Kölliker was born in Zurich, Switzerland. His early education was carried on in Zurich, and he entered the university there in 1836. After two years, however, he moved to the University of Bonn, and later to that of Berlin, becoming a pupil of noted physiologists Johannes Peter Müller and of Friedrich Gustav Jakob Henle. He graduated in philosophy at Zurich in 1841, and in medicine at Heidelberg in 1842. The first academic post which he held was that of prosector of anatomy under Henle, but his tenure of this office was brief. In 1844 he returned to Zurich University to occupy a chair as professor extraordinary of physiology and comparative anatomy. In 1847 the University of Würzburg, attracted by his rising fame, offered him the post of professor of physiology and of microscopical and comparative anatomy. He accepted the appointment, and at Würzburg he remained thenceforth, refusing all offers tempting him to leave the quiet academic life of the Bavarian town, where he died on the 2nd of November 1905.

Kölliker made substantial contributions to the study of zoology. While his earlier efforts were directed to the invertebrates, he soon passed on to the vertebrates, and studied the amphibians and mammalian embryos. He was among the first, if not the very first, to introduce into this branch of biological inquiry the newer microscopic technique the methods of hardening, sectioning and staining. By doing so, not only was he enabled to make rapid progress himself, but he also placed in the hands of others the means of a similar advancement. The remarkable strides forward which embryology made during the middle and latter half of the 19th century will always be associated with his name. His Lectures on Development, published in 1861, at once became a standard work.

But neither zoology nor embryology furnished Kölliker’s chief claim to fame. He is best known for his contributions to histology, the knowledge of the minute structure of the animal tissues. Among his earlier results was the demonstration in 1847 that smooth or unstriated muscle is made up of distinct units, of nucleated muscle cells. In this work, he followed in the footsteps of his master Henle. A few years before this, there was doubt whether arteries had muscle in their walls. In addition, no solid histological basis as yet existed for those views as to the action of the nervous system on the circulation, which were soon to be put forward, and which had such a great influence on the progress of physiology.

Kölliker and his fellow scientists were better able to undertake histological research than before because the microscope in Germany had been improved during the 1820s to such an extent that the obstacles which seventeenth century microscopists had encountered in their investigations had been overcome. The amateur scientist Antoni van Leeuwenhoek had observed nerve cells, but the microscopes which he used produced distorted images. The cells which he wanted to study did not stand out from the surrounding fluids or the background. In 1864 Kölliker revived Étienne Geoffroy Saint-Hilaire’s theory that evolution proceeds by large steps, under the name of heterogenesis. He was a critic of Darwinism and rejected a universal common ancestor, instead he supported a theory of common descent along separate lines. In Honor of his scientific achievements, Kölliker received the title of nobility “von Kölliker” and became a fellow of the Royal Society in 1860, which honored him in 1897 with their highest token of esteem, the Copley Medal.