You are here: Home › medical science › Albert Neisser and the Causative Agent of Gonorrhea 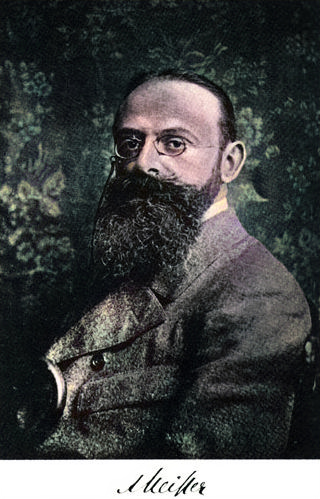 On January 22, 1855, German physician Albert Ludwig Sigesmund Neisser was born. Neisser discovered the causative agent (pathogen) of gonorrhea, a strain of bacteria that was named in his honour (Neisseria gonorrhoeae).

Albert Neisser was born the son of the Jewish physician Moritz Neisser (1820-1896), Privy Councillor in Breslau and Charlottenbrunn, and Louise Lossen (1819-1855), who came from an entrepreneurial family in Berlin. Since his mother died before he was one year old, Neisser was raised by his stepmother. After he had attended the elementary school in Münsterberg, Neisser entered the humanistic St.-Maria-Magdalena-Gymnasium in Breslau, where he was a contemporary of the German physician and scientist Paul Ehrlich.[3] Neisser obtained the Abitur in 1872 and started to study medicine at the University of Breslau. Later he was for a clinical semester at the University of Erlangen. In 1877 he passed his state examination and was awarded his doctorate in Breslau with a thesis on tapeworm disease.

Neisser found a position as assistant of the dermatologist Oskar Simon. He focused on sexually transmitted diseases and leprosy. In that period, Albert Neisser studied and obtained experimental evidence about the pathogen for gonorrhea, Neisseria gonorrhoeae. Next to his achievement on gonorrhea, Albert Neisser was also the co-discoverer of the causative agent of leprosy. In 1879 the Norwegian physician Gerhard Armauer Hansen gave to young Neisser some tissue samples of his patients and Neisser successfully stained the bacteria and announced his findings in 1880, claiming to have discovered the pathogenesis of leprosy. He habilitated in 1880 in Leipzig and was appointed private lecturer. 1882 he took over the direction of the dermatology in Breslau as an a.o. professor at the age of 29, and worked as a dermatologist in the university hospital of Breslau. In his later years, Neisser became the director of the hospital.

The Syphilis Clinical Trials and Scandal

During the late 1890s, Neisser published clinical trials on serum therapy in patients with syphilis which later became a large scandal. Neisser injected cell free serum from patients with syphilis into patients who were admitted for other medical conditions. However, the patients were not informed about the experiment or asked for their consent. When some of them contracted syphilis Neisser argued that the women did not contract syphilis as a result of his serum injections but contracted the disease because they worked as prostitutes.

The scandal was triggered by an article by the later Nobel Peace Prize laureate Ludwig Quidde, who was also active in the anti-visectionist movement, and was discussed in the Prussian House of Representatives. On the one hand, this led scientists to show solidarity with Neisser and collect signatures for him, and on the other hand to a trial against Neisser. It was found to be particularly problematic that Neisser had also experimented on underage children without the permission of their parents. In the trial, the criminal lawyer Carl Ludwig von Bar from Göttingen, who was an expert on the subject, argued that research experiments without the legally effective consent of the trial subjects would be punishable. On 29 December 1900, Neisser was found guilty of an offence for having “vaccinated persons admitted for healing with blood serum of syphilitic persons or had them vaccinated without the consent of these persons or their legal representatives“. On the same day, the Prussian Ministry of Spiritual, Educational and Medical Affairs instructed the heads of the clinics, polyclinics and other hospitals to permit human experiments only after detailed instruction and explicit consent of the test persons. Trials against minors were completely banned. [8]

Still, Albert Neisser had an increasing reputation and promoted vigorously preventive and educational measures to the public in terms of public health. Further, Neisser promoted better sanitary control of prostitutes to deal with venereal diseases. Albert Neisser was one of the founder of the Deutsche Gesellschaft zur Bekämpfung der Geschlechtskrankheiten (German Society for the Fight Against Venereal Diseases) in 1902, and of the Deutsche Dermatologische Gesellschaft (German Dermatological Society) in 1888.

In addition to syphilis, he also worked on lupus diseases, where he first pointed out a distinction between tuberculous (Lupus vulgaris: skin tuberculosis) and non-tuberculous forms (Lupus pernio). Although Neisser did not find the causes of syphilis, he made significant contributions to the mode of infection by conducting experiments with monkeys in Java (1905/1907). Milestones in syphilis diagnostics are joint studies with August von Wassermann, which led to the development of a detection reaction for syphilis pathogens (1906) in blood serum (Wassermann reaction). Neisser was primarily concerned with the diagnosis, therapy (arsphenamine) and prevention (prostitute problem) of venereal diseases, but also with other skin diseases (lichenoid vitiligo, urticaria, skin tumours, skin infections, psoriasis, skin fungus diseases, pemphigus, eczema).

Neisser and his wife Toni were art lovers and patrons. Villa Neisser was richly endowed with art treasures and a cultural centre of the city of Breslau. Albert Neisser died of septicemia on 30 July 1916, at the age of 61 years, in Breslau.