You are here: Home › biology › Alfred Kinsey and his Scientific Interest in Sex 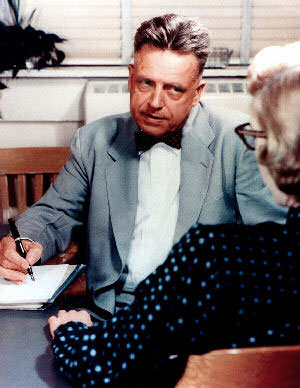 On September 14, 1953, Dr. Alfred Charles Kinsey published the second of his controversially discussed and provoking reports entitled ‘Sexual Behaviour in the Human Female‘. Kinsey’s work has profoundly influenced social and cultural values in the United States and many other countries.

From Engineering to Biology

Alfred Charles Kinsey grew up in a strictly religious Christian family and even though he did not share his parent’s enthusiasm, Kinsey followed their wishes and demands. He even began studying engineering at the Stevens Institute of Technology, but regarded these years as a waste of time. Alfred Kinsey developed a predilection for nature early on, was a boy scout. Finally, in 1914, the talented student began studying in his original fields of interest, biology and psychology. During the research for his doctoral thesis on gall wasps, Kinsey more and more tried to relate the wasps reproduction practices to human sexual practices, which opened up a whole new scientific field to him. He received his doctorate in zoology from Harvard in 1920. Kinsey began his scientific career as an entomologist at Indiana University in Bloomington. There he dealt with the cataloguing of gall wasps and wrote a two-volume standard work on this insect family. In order to be able to make reliable statements, he collected and determined hundreds of thousands of animals.

In 1936, Kinsey was asked to hold marriage counseling courses for the students, arousing his interest in human sexual behavior. It turned out that there was virtually no data on the sexual behaviour of the mammal human being and that many writings drew some very obscure conclusions on the basis of purely philosophical considerations. The first project he made public was the ‘Kinsey Scale’, a scale to measure sexual orientation ranking from 0 as exclusively heterosexual and 6 as exclusively homosexual. Today, the scale is seen as outdated, because of it not representing all sexual identities. Nevertheless, the scale was widely used and regarded by many sexologists for several years.

Kinsey did not hesitate to shout out what he had to say, even though he began his research in times when the topics of sexuality and sexual identity were not as open as they (at least seem to be) today. So he began organizing public discussion groups at Indiana University and openly promoted early sexual experiences in order to psychologically be a healthy person. Completely independently and alone he laid the foundation for academic sexual research by first asking his female students about their sexual behaviour; they told their parents, who in turn informed church circles about it. They were outraged and put pressure on Kinsey. He had to change his methodology. Together with his colleagues, he interviewed over 20,000 Americans about their sexual behavior, for which he developed a 500-question questionnaire himself.

His first revolutionary work was was published in 1948 and was called the ‘Sexual Behavior in the human Male‘. It was the first part of the so called Kinsey Report and caused him to instantly become famous. The second work ‘Sexual Behavior in the human Female‘ followed five years later. In the report, he explained his ‘Kinsey Scale’ in detail, he revealed statistics about the marital coitus and discussed the topic of sadomasochism, which caused a great scandal these days.

Despite the sexual revolution Kinsey was able to initiate through opening people’s minds and confronting them with topics they may have found disturbing or firstly repellant, Kinsey caused many controversies concerning his scientific methods and his gathering of data. Many times he was accused of falsifying statistics and the biggest fraud was probably performed when Kinsey published his studies on pedophilia, claiming to have interviewed 9 men. In reality he only had the data of one person, pretending them to origin from 9 different sources. Also critically are his methods in gathering his staff and filming them during the sexual intercourse.

Christian, conservative and tradition-conscious groups attacked and still attack Kinsey today because of what they consider to be immoral and dangerous investigations. Kinsey was accused by his opponents of the most different sexual deviant behaviour up to criminal offences. These included a preference for group sex, sex with children and the accusation that he had urged his wife to have sex with other men or his employees to have group sex. Although these assertions could never be proven, until today attempts are made to discredit Kinsey’s research with it. President of the University of Indiana, Herman B. Wells, defended Kinsey’s research in a dispute that became a test case for academic freedom. The Rockefeller Foundation, the principal donor, was summoned before the McCarthy Committee and then suspended its payments. Kinsey also refused to comply with the wishes of FBI chief J. Edgar Hoover to share data with them to track down homosexuals in the State Department.

Kinsey himself, who was the father of four children, considered the social impact of his work to be minimal at the end of his life. According to Kinsey’s own assessment shortly before his death in 1956, he had not achieved his goal of sexual liberation. At that time, the full effect of the Sexual Revolution was not yet discernible.