You are here: Home › archeology › Sir Leonard Woolley and the Excavations in Ur 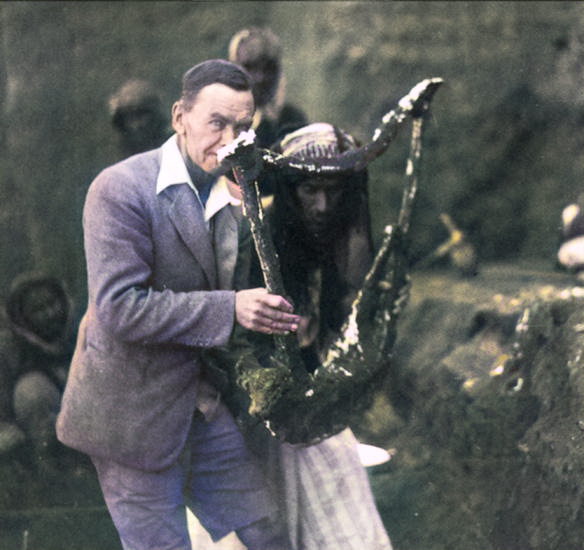 On April 17, 1880, British archaeologist Sir Charles Leonard Woolley was born. Woolley was best known for his excavations at Ur in Mesopotamia. He is considered to have been one of the first “modern” archaeologists, and was knighted in 1935 for his contributions to the discipline of archaeology.

Leonard Woolley was born in London, the son of a clergyman, and was brother to Geoffrey Harold Woolley, VC, and George Cathcart Woolley. He was  educated at St John’s School, Leatherhead and New College, Oxford. He became assistant of the Ashmolean Museum, Oxford in 1905. He later began his excavation career on the Roman site at Corbridge for Francis Haverfield. When he ordered the collection of Sir Aurel Stein in 1911, he became acquainted with Lord Carnarvon.[3] This contact brought Woolley to Egypt. Even before the First World War, he began important excavations in Karkemisch. Together with T. E. Lawrence, also known as “Lawrence of Arabia”, he conducted the Zin Archaeological Survey on behalf of the Palestine Exploration Fund from 1913 to 1914.[4] A personal competition began with Howard Carter for popularity and recognition. With Lawrence he went on an expedition to the Negev and worked for the secret service. In 1916 he was taken prisoner of war in Turkey.

However, Woolley later admitted that he “had never studied archaeological methods even from books … and I had not any idea how to make a survey or a ground-plan“. Still, he was about to become one of the first modern archaeologists, who was known to work in a methodical way, keeping careful records, and using them to reconstruct ancient life and history.

Leonard Woolley’s work at Ur started in 1922. There, he was able to make important discoveries in the course of excavating the royal cemeteries there, including the Copper Bull. He also discovered the pair of Ram in a Thicket figurines, one of which is in the British Museum and the other in the University of Pennsylvania Museum of Archaeology and Anthropology. At Ur, Leonard Woolley discovered tombs with large paintings of ancient Sumerian culture at its zenith, along with gold and silver jewellery, cups and other furnishings.

However, the probably most famous tomb was that of  Queen Pu-Abi, which was then untouched by looters. They found a cylindrical seal bearing her name in Sumerian, and her body was found buried along with those of two attendants, who had presumably been poisoned to continue to serve her after death. The archaeologist reconstructed Pu-Abi’s funeral ceremony from objects found in her tomb.

Unfortunately, Woolley’s archaeological career was interrupted by the entry of the United Kingdom into World War II. Woolley then became part of the Monuments, Fine Arts and Archives Section of the Allied armies . After the war, the archaeologist returned to Alalakh, where he continued to work until 1949.

Woolley is considered one of the first “modern” archaeologists. While his predecessors Paul-Émile Botta, Austen Henry Layard and Hormuzd Rassam had the ambition to bring spectacular finds to light in the shortest possible time, he was particularly concerned with the precise recording of the location of small finds in order to be able to assign them as accurately as possible. He spent a lot of time training his local staff: How to dig without moving finds, how to quickly build a roof out of coats when a downpour threatens to silting up the excavation site, how to recognize decayed wooden rods from holes, reed mats on wavy lines of white powder. Only two thousand graves were dug and conscientiously recorded in the run-up to the temple district of Ur until five years later, in 1927, he returned to the temple district himself, which he had already recognized in 1922 in order to excavate the king’s and prince’s tombs.

As head of the excavation, Woolley was considered a genius on the one hand, but also a tyrant on the other. His great powers of imagination helped him to reconstruct the excavations. Woolley died on 20 February 1960 at age 79.

Ur : The Rise and Fall of the Ancient Sumerian City State, [10]