You are here: Home › history › Bartolomeo Platina and the Vatican Library 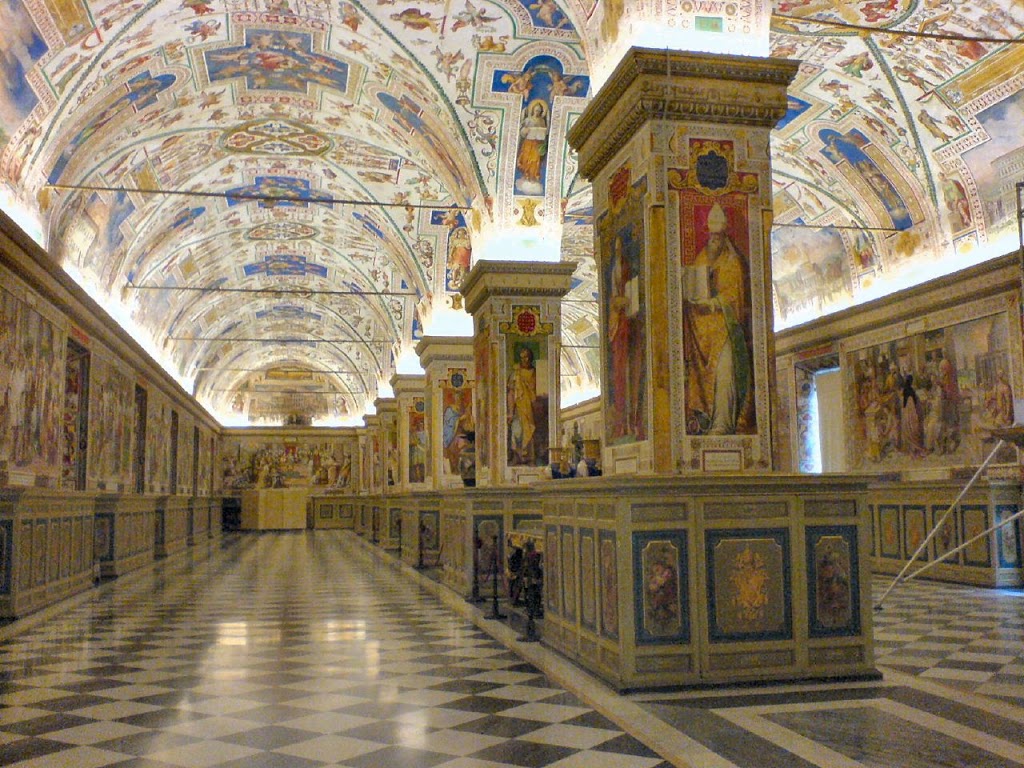 The Sistine Hall of the Vatican Library

On June 15, 1475, Pope Sixtus IV issued the papal bull ‘Ad decorem militantis Ecclesiae‘ in which he regulated the complex structure of the newly founded Vatican Apostolic Library and appointed Renaissance author Bartolomeo Platina as its first head librarian. For sure you will heave heard about the famous Vatican Library and even more about the Vatican Secret Archives, which are part of the library. Even in popular culture such as Dan Brown‘s ‘Angel and Demons‘ the protagonist Prof. Robert Langdon is rather excited to get permission to study the documents of the Vatican Secret Archives to find a clue in the puzzle he has to solve. But, let’s not mix up the library with the archive. Although you might think there is no or only little difference, today we are focusing on the Vatican Library. Let’s take a brief look back into library history…

A (Very) Short History of the Library

The first libraries consisted of archives of the earliest form of writing – clay tablets in cuneiform script discovered in Sumer, some dating back to 2600 BC. Actually, these early writings mark the end of the prehistoric age and the start of history. The earliest discovered private archives were kept at Ugarit. There is also evidence of libraries at Nippur about 1900 BC and at Nineveh about 700 BC showing also a first library classification system. Libraries are collecting written books. Although this might seem trivial, we have to distinguish the library from the archive, where the state or institutional records are kept. First personal libraries appeared in classical Greece in the 5th century BC. But, the most famous library of antiquity was the Library of Alexandria, in Egypt, also the largest and most significant great library of the ancient world. It flourished under the patronage of the Ptolemaic dynasty and functioned as a major center of scholarship from its construction in the 3rd century BC until the Roman conquest of Egypt in 30 BC. In the 6th century, at the very close of the Classical period, the great libraries of the Mediterranean world remained those of Constantinople and Alexandria.

By the 8th century first Iranians and then Arabs had imported the craft of papermaking from China, with a paper mill already at work in Baghdad in 794. The 9th century Abbasid Caliph al-Mutawakkil of Iraq, ordered the construction of a “zawiyat qurra” – an enclosure for readers which was “lavishly furnished and equipped”. The Islamic libraries often employed translators and copyists in large numbers, in order to render into Arabic the bulk of the available Persian, Greek, Roman and Sanskrit non-fiction and the classics of literature. The contents of these Islamic libraries were copied by Christian monks in Muslim/Christian border areas, particularly Spain and Sicily. From there they eventually made their way into other parts of Christian Europe. In the Early Middle Ages, monastery libraries developed, such as the important one at the Abbey of Montecassino in Italy. Books were usually chained to the shelves, reflecting the fact that manuscripts, which were created via the labour-intensive process of hand copying, were valuable possessions.

From the 15th century in central and northern Italy, libraries of humanists and their enlightened patrons provided a nucleus around which an “academy” of scholars congregated in each Italian city of consequence. Malatesta Novello, lord of Cesena, founded the Malatestiana Library. Cosimo de Medici in Florence established his own collection, which formed the basis of the Laurentian Library. In Rome, the papal collections were brought together by Pope Nicholas V, in separate Greek and Latin libraries, and housed by Pope Sixtus IV, who consigned the Bibliotheca Apostolica Vaticana to the care of his librarian, the humanist Bartolomeo Platina in 1475. 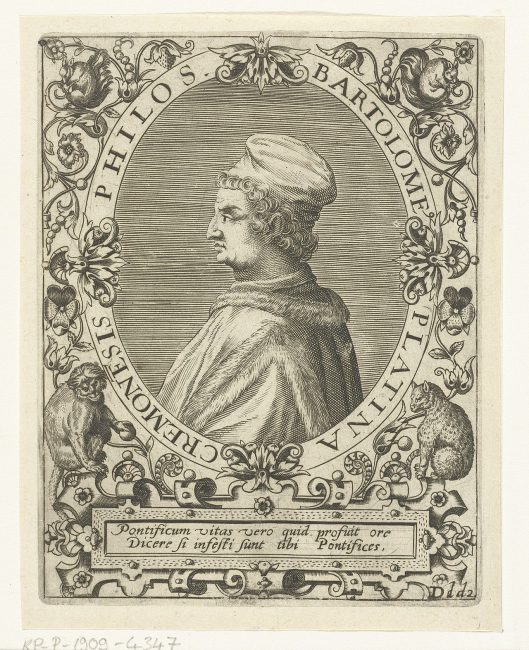 But Platina not always was a librarian. He first enlisted as a soldier, and was then appointed a tutor before he went to Florence in 1457, and studied under the Greek scholar Argyropulos. In 1462 he proceeded to Rome, where he was elected a member of the College of Abbreviators in 1463. Interestingly, in 1465 Platina composed De honesta voluptate et valetudine (“On honourable pleasure and health“). This first printed cookbook as well as the first Renaissance cookbook, a monument of medieval cuisine in Renaissance intellectual trappings, left the press in 1474 and ran into dozens of editions, disseminating Roman ideas about fine dining throughout Western Europe. Platina’s papal employment was abruptly curtailed on the arrival of an anti-humanist pope, Paul II (Pietro Barbo), who had the rebellious Platina locked up in Castel Sant’Angelo during the winter of 1464-65 as a punishment for his remonstrations. In 1468 he was again confined in Castel Sant’Angelo for a further year, where he was interrogated under torture, following accusations of an alleged conspiracy by members of Pomponio’s Roman Academy involving plans to assassinate the pope.

After his release on July 7, 1469, he expected to be again in the employ of Paul II, who, however, declined his services. Platina threatened vengeance and executed his threat, when at the suggestion of the strongly pro-humanist pope, Sixtus IV (Francesco della Rovere)he wrote his Vitæ Pontificum Platinæ historici liber de vita Christi ac omnium pontificum qui hactenus ducenti fuere et XX (1479). In it he paints his enemy as cruel, and an archenemy of science. For centuries it influenced historical opinions until critical research proved otherwise. It first appeared in print in 1479. Among other things, this chronicle contains the inaccurate assertion that John VIII was not a pope, but the popeess Joan. In 1580, the chronicle was placed on the index of the Catholic Church.[8]

Nevertheless, the Vatican Library is one of the oldest libraries in the world and contains one of the most significant collections of historical texts. It has 75,000 codices from throughout history. Pope Nicholas V established a library in the Vatican already in 1448 by combining some 350 Greek, Latin and Hebrew codices inherited from his predecessors with his own collection and extensive acquisitions, among them manuscripts from the imperial Library of Constantinople. When Bartolomeo Platina produced a listing in 1481, the library held over 3,500 items, making it by far the largest in the Western world. Around 1587, Pope Sixtus V commissioned the architect Domenico Fontana to construct a new building for the library that is still in use today. Today, the library holds some 75,000 manuscripts and over 1.1 million printed books, which include some 8,500 incunabula. The Vatican Secret Archives were separated from the library at the beginning of the 17th century and contain another 150,000 items.

Brewster Kahle: A digital library, free to the world, [12]