You are here: Home › architecture › Abbot Suger and the Birth of the Gothic Style 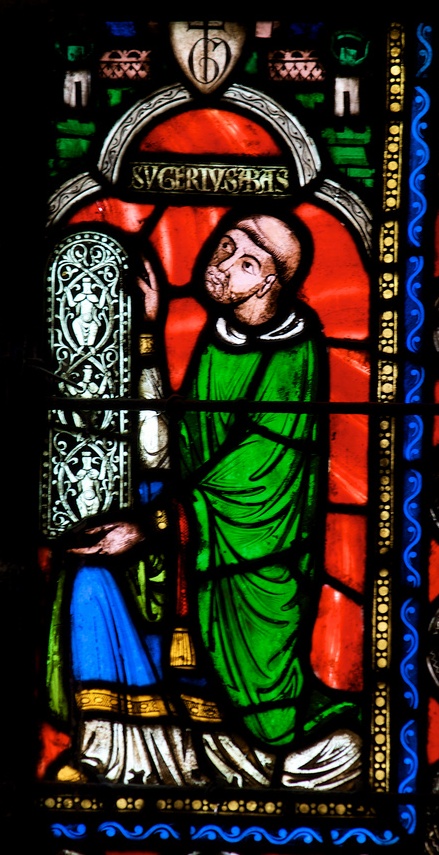 On January 13, 1151, French abbot, statesman, historian and one of the earliest patrons of Gothic architecture, Suger passed away. The eastern end of the Basilica Church of St. Denis, built by Abbot Suger and completed in 1144, is often cited as the first truly Gothic building, as it draws together many of architectural forms which had evolved from Romanesque and typify the Gothic style.

“The new chevet being joined to the narthex,
The church sparkles, illuminated in its median vessel,
For luminous is that which joins in clarity two sources of light.
The famous work shines with this new brightness.
The enlargement was carried out in our time.
It was I, Suger, who directed the work.”
– La geste de Louis VI par Suger

Suger was born of peasant parents at about 1081. The origins of his family are unknown. Several times in his writings he suggests that his was a humble background, though this may just be a topos or convention of autobiographical writing. In 1091, at the age of ten, Suger was given as an oblate to the abbey of St. Denis (the patron saint of France, who had supposedly brought Christianity to Gaul), where he began his education. He trained at the priory of Saint-Denis de l’Estrée, and there first met Louis Capet the future king Louis VI of France as his schoolmate. From 1104 to 1106, Suger attended another school, perhaps that attached to the abbey of Saint-Benoît-sur-Loire.

In 1106 he became secretary to abbot Adam of St. Denis. In the following year he became provost of Berneval in Normandy, and in 1109 of Toury. Suger made various diplomatic missions to Henry Beauclerc of Normandy, who was also King Henry I of England and the son of William the Conqueror. Suger was greatly impressed by the strong, orderly administration of the Norman ruler, which contrasted with the chaotic feudalism in France.[1] In 1118, Louis VI sent Suger to the court of Pope Gelasius II at Maguelonne (at Montpellier, Gulf of Lyon), and he lived from 1121 to 1122 at the court of Gelasius’s successor, Calixtus II.

On his return from Maguelonne, Suger became abbot of St-Denis in 1122. Until 1127, he occupied himself at court mainly with the temporal affairs of the kingdom, while during the following decade he devoted himself to the reorganization and reform of St-Denis. In 1137, he accompanied the future king, Louis VII, into Aquitaine on the occasion of that prince’s marriage to Eleanor of Aquitaine, and during the Second Crusade served as one of the regents of the kingdom (1147–1149). He bitterly opposed the king’s divorce, having himself advised the marriage. Although he disapproved of the Second Crusade, he himself, at the time of his death on January 13, 1151, had started preaching a new crusade.

Suger had guided the monks of St. Denis back into a life of greater piety and religious observation than they had known under their previous Abbot Adam, where the monks had gained notoriety for behaving in an excessively secular fashion. Urged by Bernard, abbot of Clairvaux and a close adviser to the pope and the greatest spiritual leader in Europe at the time, Suger corrected this situation.

The Plan to Rebuild St.-Denis

At about 1137, abbot Suger, friend and confidant of the French Kings, Louis VI and Louis VII decided to rebuild the great Church of St. Denis, the burial church of the French monarchs, which had fallen into decay. Suger began with the West front, reconstructing the original Carolingian façade and designed the façade of St. Denis to be an echo of the Roman Arch of Constantine with its three-part division and three large portals to ease the problem of congestion. The rose window above the West portal is the earliest-known such example, although Romanesque circular windows preceded it in general form.

At the completion of the west front in 1140, Abbot Suger moved on to the reconstruction of the eastern end, leaving the Carolingian nave in use. He designed a choir (chancel) that would be suffused with light. To achieve his aims, his masons drew on the several new features which evolved or had been introduced to Romanesque architecture, the pointed arch, the ribbed vault, the ambulatory with radiating chapels, the clustered columns supporting ribs springing in different directions and the flying buttresses which enabled the insertion of large clerestory windows. 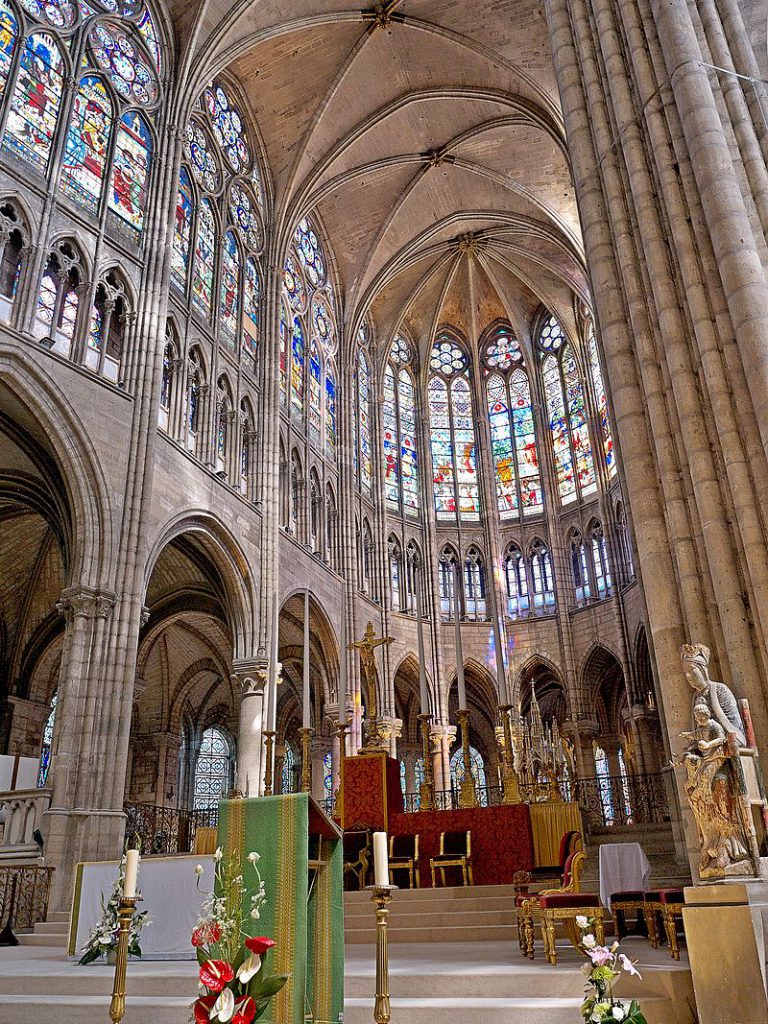 The new structure was finished and dedicated on 11 June 1144, in the presence of the King. The Abbey of St. Denis thus became the prototype for further building in the royal domain of northern France. It is often cited as the first building in the Gothic style. A hundred years later, the old nave of Saint-Denis was rebuilt in the Gothic style, gaining, in its transepts, two spectacular rose windows.

Suger’s writings range in subject matter from histories of the kings Louis VI and VII (Historia gloriosi regis Ludovici) to accounts of his abbacy and the building of Saint-Denis (De Rebus in Administratione sua Gestis, Libellus Alter de Consecratione Ecclesiae Sancti Dionysii, Ordinatio ) Scholars have ascribed an enormous importance to these texts, without which it is questionable as to whether Suger and his church at Saint-Denis would have received the same kind of academic attention.[2]