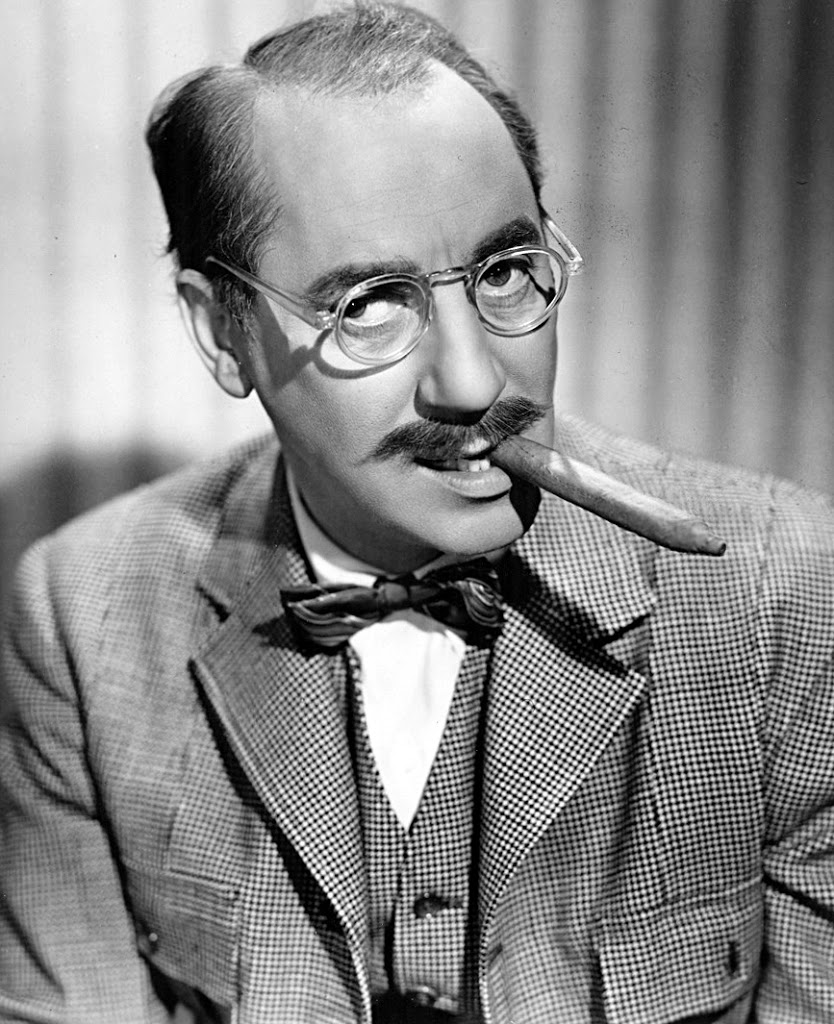 On October 2, 1890, Julius Henry Marx, better known as Groucho Marx from the famous comedians, the ‘Marx Brothers‘ was born in New York City. The bushy-browed, cigar-smoking wisecracker with the painted on mustache (later on with a real mustache) and stooped walk was the leader of ‘The Marx Brothers‘. With one-liners that were many times full of sexual innuendo, Groucho never used profanity in any of his performances and said he never wanted to be known as a dirty comic. With a great love of music and singing, one of the things Groucho was best known for was his rendition of the song “Lydia the Tattooed Lady.”[5]

“Although it is generally known, I think it’s about time to announce that I was born at a very early age.”
— Groucho Marx, from his autobiography Groucho and Me (1959)

The Marx brothers grew up in Yorkville on the Upper East Side of Manhattan in a small Jewish neighborhood between larger German-Irish communities. Father Simon came from Alsace and was therefore called “Frenchie”. Mother Minnie came from Dornum in East Frisia. The eldest son Leonard (Chico) took piano lessons, while Julius had a pleasant soprano voice and could hold the note. He actually wanted to become a doctor, but he was supposed to earn money for the family and had to leave school at the age of twelve. At that time Groucho was devouring books (especially Horatio Alger, author of cheap novels) and throughout his life he used his knowledge to make up for his ‘missed’ formal education. After several attempts to gain a foothold with office jobs and other age-appropriate activities, he went on stage as a singer in 1905. His assertion that he was only moderately successful in the vaudeville world, but hopelessly mediocre, later proved to be silly joking.

The Four Nightingales and a Broadway Sensation

Under the name “The Four Nightingales” Groucho, Gummo, Harpo and another boy named Lou Levy performed in various variety shows without much success. They then moved to La Grange in Illinois to play in the Midwest. After a particularly bleak performance in Nacogdoches, Texas, Groucho, Gummo and Harpo began to entertain themselves on stage with jokes and to their great astonishment the audience liked them much more as comedians than as musicians. They rewrote a then popular piece by Gus Edwards, School Days, and called it Fun In Hi Skule. With variations of this program, they toured the country for over seven years. During their time in the Varieté, the brothers performed with different linguistic accents. Chico developed an Italian accent, which he used to tell a few thugs that he was Italian and not Jewish. Groucho’s figure in Hi Skule was German, so he naturally played it with a German accent. This changed when the mood changed after the torpedoing of the RMS Lusitania in 1915 and turned against Germany. Thereupon he developed the fast talking wise guy, with whom he should become famous. Chicos business acumen led to three successful stage plays and the brothers became Broadway sensations even before their Hollywood era.

I sent the club a wire stating, “PLEASE ACCEPT MY RESIGNATION. I DON’T WANT TO BELONG TO ANY CLUB THAT WILL ACCEPT PEOPLE LIKE ME AS A MEMBER”.
— Telegram to the Friar’s Club of Beverly Hills to which he belonged, as recounted in Groucho and Me (1959), p. 321

The Invention of Groucho

By the 1920s, the Marx Brothers had become a hugely popular theatrical act. During the run of their vaudeville sketch ‘Home Again‘, Groucho was unable to find his prop mustache and rapidly painted one on with greasepaint, which is how he would appear with his brothers ever afterward, despite efforts by certain film directors to make his hirsute adornment look realistic. In the movies, Groucho cultivated his role as a tongue-twisting gentleman who took his opponents by surprise and knew how to alternately foment and repel the affection of his admirers (mostly embodied by Margaret Dumont). His characteristic gait, with its expansive steps and a hand on his back, parodied the fashionable promenade of the American upper class at the turn of the century.

Then, two more Broadway hits followed – ‘The Cocoanuts‘ and ‘Animal Crackers‘. The latter of which has the character of Captain Spaulding which remained (with the song ‘Hooray for Captain Spaulding‘) a trademark for Groucho for the rest of his life. The Cocoanuts and Animal Crackers were also the first movies (except for one unreleased) made by the Marx Brothers. In the later years of the Marx Brothers movie career Groucho started working on radio. He hosted several programmes and was a guest on many shows. His biggest success was the comedy quiz show ‘You Bet Your Life‘ which started in 1947. The show later moved to television and was on the air until 1961.

“Marriage is a wonderful institution. But who wants to live in an institution?”
— Groucho Marx

Away from the stage Groucho was a book lover. He always regretted having had only a middle school education. To compensate for this, he read everything that fell into his hands. His reading was extraordinary, but he spoke only very cautiously about it: “I think television educates,” he once said. “Every time someone turns on the television, I go next door and read”. He also wrote books himself, including the autobiography Groucho and Me and Memoirs of a Mangy Lover. His friends included the writers T. S. Eliot and Carl Sandburg.[7] He published many of his private and business correspondence in The Groucho Letters.

Always being of a liberal political opinion, Groucho sometimes made critical remarks about politics and had friends which were regarded as communist the the US of the 1950s. This let to Groucho being investigated by the FBI. When the Marx Brothers became popular again in the late 60s Groucho made a comeback with a show in Carnegie Hall in 1972. At the film festival in Cannes in 1972 he was made Commandeur des Arts et Lettres and in 1974 he received a special Academy Award for the achievements of the Marx Brothers. Groucho died on August 19th 1977.[9]