You are here: Home › geology › William Joscelyn Arkell and the Jurassic Period 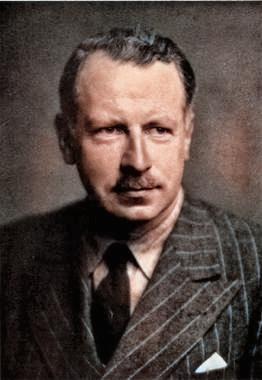 On June 9, 1904, British geologist and paleontologist William Joscelyn Arkell was born. Arkell is regarded as the leading authority on the Jurassic Period during the middle part of the 20th century. His work includes the classification of Jurassic ammonites and an interpretation of the environments of that period. In 1946, his “Standard of the European Jurassic” advocated a commission formulate a code of rules for stratigraphical nomenclature.

William Joscelyn Arkell was born in Highworth, Wiltshire, the youngest of a family of seven. His father, James Arkell was a partner in the prosperous family business Arkell’s Brewery. His mother, Laura Jane Arkell was an artist of noted ability. Arkell attended New College, Oxford and graduated with First Class Honours in geology in 1925. At Oxford University, Arkell continued his education and was awarded a Burdett-Coutts research scholarship. There, William Arkell‘s research focused on the taxonomy of the bivalves from the Upper Jurassic Corallian beds of England. In order to research evidence of Palaeolithic human remains, Arkell spent several winters in the Nile Valley of Egypt in association with the University of Chicago.

The Permian through Jurassic stratigraphy of the Colorado Plateau area of southeastern Utah.

The Jurassic System of Great Britain

Arkell became senior research fellow at New College in 1929. One of his most important publications was ‘The Jurassic System of Great Britain‘ from 1933. In it, the scientist examined and consolidated all previous work on the Jurassic, including the formations described by the pioneer on British geology, William Smith, in the 19th century. The work was highly successful and significantly contributed to the understanding of the Jurassic .In particular his graduate research topic involved the taxonomy of the bivalves from the Upper Jurassic Corallian beds of England. For this and other papers on the Jurassic of southern England he was awarded a PhD in 1928. William Arkell was able to increase his reputation and established himself as an authority on the Jurassic, at the age of only 29. Whilst undertaking his doctoral research, Arkell spent four winter seasons (1926–30) investigating evidence of Palaeolithic human remains in the Nile Valley of Egypt in association with the University of Chicago. Four notable monographs were the result of this work.

The Jura Mountains and the Jura Limestone 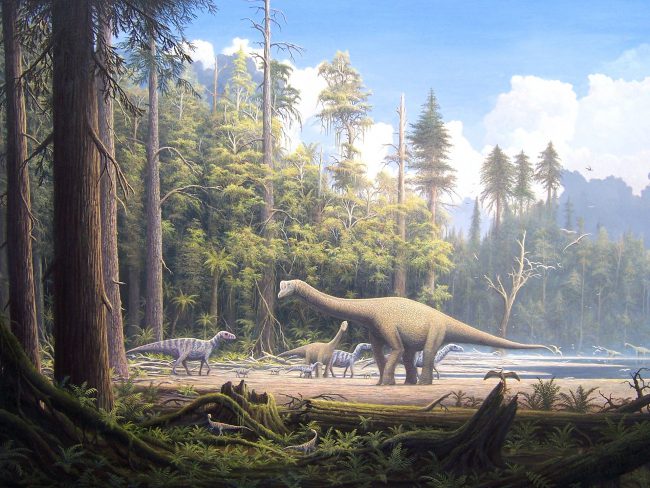 Painting of a late Jurassic Scene on one of the large island in the Lower Saxony basin in northern Germany. It shows an adult and a juvenile specimen of the sauropod Europasaurus holgeri and iguanodons passing by. There are two Compsognathus in the foreground and an Archaeopteryx at the right.

The Jurassic Period spanned 56 million years from the end of the Triassic Period 201.3 million years ago (Mya) to the beginning of the Cretaceous Period 145 Mya. The chronostratigraphic term “Jurassic” is directly linked to the Jura Mountains, a mountain range mainly following the course of the France–Switzerland border. During a tour of the region in 1795, Alexander von Humboldt [4] recognized the mainly limestone dominated mountain range of the Jura Mountains as a separate formation that had not been included in the established stratigraphic system defined by Abraham Gottlob Werner, and he named it “Jura-Kalkstein” (‘Jura limestone’) in 1799. [5] Thirty years later, in 1829, the French naturalist Alexandre Brongniart published a survey on the different terrains that constitute the crust of the Earth. In this book, Brongniart referred to the terrains of the Jura Mountains as terrains jurassiques, thus coining and publishing the term for the first time.

William Arkell was further an expert on Jurassic limestones used as building materials. For instance, he published works (e.g. ‘The building-stones of Blenheim Palace, Cornbury Park, Glympton Park and Heythrop House, Oxfordshire‘) on the various types of limestone used for the buildings at Oxford. The often obscure terminology used by miners and quarrymen was clarified by his dictionary of rock terms.

After World War II had started, Arkell‘s scientific work came to a halt and starting from 1941, he worked for the Ministry of Transport in London. At the time, the city suffered tremendously from the war bombs. Arkell became ill and had to spend five months in hospital.

Arkell’s research continued at Trinity College, Cambridge after the war where the scientist was appointed senior researcher. There, he researched the use of ammonites as zone fossils in Jurassic stratigraphy. Once again, Arkell became one of the leading experts in the field. In 1956, William Arkell published his influential work ‘Jurassic Geology of the World‘ in which all of Arkell‘s collected knowledge of the Jurassic was consolidated.

Despite his vigorous outer appearance, Arkell was never a well man. In the autumn of 1956 he suffered a severe stroke which left him partially paralysed and with double vision. Despite this his determination to continue his work and correspondence at the University of Cambridge continued. He suffered a second stroke on 18 April 1958 and died several hours later. His geological library, almost as complete as that of the British Museum (Natural History) in world Jurassic literature, has been bequeathed to the University of Oxford, in the anticipation that the Department of Geology there will become a centre for work on Jurassic palaeontology.

How the Tyrannosaurs Ruled the World – with David Hone, [9]