You are here: Home › mathematics › William Friedman and the Art of Cryptology 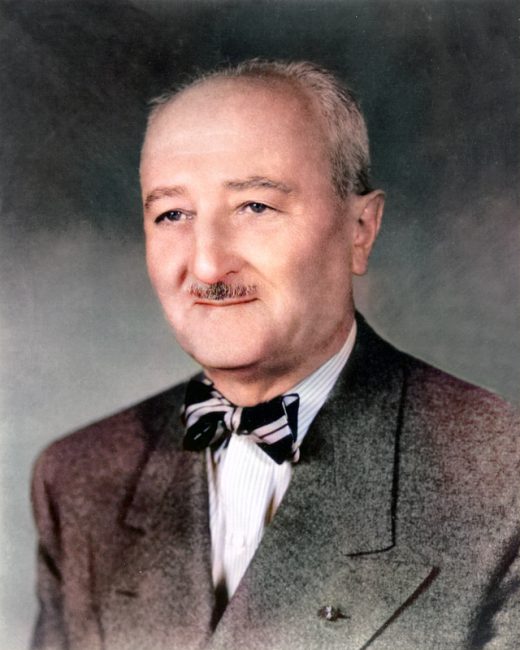 On September 24, 1894, US cryptologist William F. Friedman was born. He is considered one of the world’s greatest cryptologists, who helped decipher enemy codes from World War I to World War II.

Friedman was born as Wolfe Frederick Friedman, then part of imperial Russia, now Chisinau, capital of Moldova, as the son of Frederick Friedman, a Jew from Bucharest who worked as a translator and linguist for the Russian Postal Service, and the daughter of a well-to-do wine merchant. Friedman’s family fled Russia in 1892 to escape the virulent anti-semitism there, ending up in Pittsburgh, Pennsylvania. Like many other too, Friedman was introduced to cryptography already as a child while reading Edgar Allan Poe‘s famous short story “The Gold-Bug“.[4] Actually, I also heart of ciphers and secret writings for the first time as a child with the very same story of an adventure where the protagonists after deciphering a secret message were lead to a buried treasure.

Friedman studied at the Michigan Agricultural College and received a scholarship to work on genetics at Cornell University. In September 1915, Friedman joined Fabyan’s Riverbank Laboratories outside Chicago, a private research laboratory. As head of the Department of Genetics. Besides other industrial and agricultural topics, there was a cipher department at Riverbank studying the “Baconian Cipher,” i.e. secret messages which Sir Francis Bacon had allegedly hidden in various texts during the reigns of Elizabeth I and James I and Friedman became interested in the study of codes and ciphers.[5] When Riverbank was asked to train the military in the use of codes, Friedman was assigned as the principal instructor. Friedman served as a lieutenant in G6A2, the crypt unit of the American Expeditionary Forces during World War I, as the personal cryptographer for General John J. Pershing.

He returned to the US in 1920 and published an eighth monograph, “The Index of Coincidence and its Applications in Cryptography“, considered by some to be the most important publication in modern cryptography to that time. His texts for Army cryptographic training were well thought of and remained classified for several decades. In 1921 he became chief cryptanalyst for the War Department and later led the Signals Intelligence Service(SIS)—a position he kept for a quarter century. In 1929 he was selected to be the head of the newly organized Signal Intelligence Service (SIS). There, he created the organizational foundations of a cryptologic structure which evolved into the Army Security Agency (ASA) in World War II. In the process, he led the transition from paper and pencil cryptology into the modern era characterized by the application of machines to both cryptography and cryptanalysis.[1]

On the outbreak of World War II Friedman became involved in Magic, the codename given for the American operation to break the Japanese diplomatic and military codes. The Communication Special Unit (US Navy) and the Signals Intelligence Section (US Army) worked together in monitoring the traffic of coded messages sent by the Japanese Government and the Imperial Headquarters to their commanders at sea and in the field. In 1939 Japan began using a new cipher machine invented by Jinsaburo Ito. Nicknamed the Purple Machine, the code was not broken until September 1940 by Friedman and his team. However, because of the large volume of intelligence being received by the staff of Magic, they were unable to give adequate warnings about the proposed attack at Pearl Harbor. With increases in the number of people working at Magic they were able to discover the attack plan at the Battle of Midway. This enabled Admiral Chester Nimitz to use this information to fight off a much larger force and halt the Japanese offensive in the Pacific.[2]

Following World War II, Friedman remained in government signals intelligence. In 1949 he became head of the cryptographic division of the newly formed Armed Forces Security Agency (AFSA) and in 1952 became chief cryptologist for the National Security Agency (NSA). Friedman produced a classic series of textbooks, “Military Cryptanalysis“, which was used to train NSA students. During his early years at NSA, he encouraged it to develop what were probably the first super-computers, although he was never convinced a machine could have the “insight” of a human mind. Friedman also spent much of his free time trying to decipher the famous Voynich Manuscript,[3] written sometime between 1403–1437. However, after four decades of study he finally had to admit defeat, contributing no more than an educated guess as to its origins and meaning.