You are here: Home › physics › Veerabhadran Ramanathan and the Brown Clouds

On November 24, 1944, Indian atmospheric scientist Veerabhadran Ramanathan was born. He has contributed to many areas of the atmospheric sciences including developments to general circulation models, atmospheric chemistry, and radiative transfer. But, he is best known for his 1999 discovery of the “Asian Brown Cloud” – wandering layers of air pollution as wide as a continent and deeper than the Grand Canyon.

Ramanathan was born in Chennai, India. At the age of 11, he moved with his family to Bangalore. He received his bachelor’s degree in engineering from Annamalai University, and a master’s degree from the Indian Institute of Science. In 1970, he arrived in the United States to study interferometry at the State University of New York at Stony Brook under the direction of Robert Cess. Before Ramanathan could begin working on his PhD research, Cess decided to change his research and focus on planetary atmospheres.

The Greenhouse Effect and CFCs

In the mid-1970s, Ramanathan belonged to the small group of scientists who warned of the dangers of very low concentrations of greenhouse gases, which received little attention. In 1981, he described that the very strong greenhouse effect of chlorofluorocarbons (CFCs) alone would warm the Earth’s atmosphere by a whole degree by the year 2000 unless emissions of this gas were dramatically reduced. In a sensational work from 1985 he stated that no less than 30 trace gases act as greenhouse gases and that man has already significantly increased the concentration of these gases and continues to do so. Taken together, these gases have almost the same greenhouse potential as carbon dioxide, which was previously the sole focus of attention.

Ramanathan’s discovery was underpinned in the year of its publication by the discovery of the ozone hole over Antarctica. Atmospheric chemists had been right with their warnings about the threat to the ozone layer. And even for politicians from outside the field it was now clear how great the influence of trace gases of the lowest concentration can be on the atmosphere. If global warming caused by carbon dioxide was a threat in itself, it was now clear that the problem was much greater at its core. International action was needed. Two years later, in 1987, it was decided under the Montreal Protocol to ban the production of CFCs, and in the following year, 1988, the Intergovernmental Panel on Climate Change, abbreviated IPCC, was founded.

In later years, Veerabhadran Ramanathan was able to show that aerosols have a cooling effect on the surface of the planet, and at the top of the atmosphere, but the forcing at the top of the atmosphere was only one-third the magnitude as the surface forcing. During his work with the Central Equatorial Pacific Experiment, Ramanathan also noticed that absorbing black carbonaceous aerosols have a larger influence on climate than previously thought. This led to the development of the Indian Ocean Experiment (INDOEX).

As part of the Indian Ocean Experiment, which was led by Veerabhadran Ramanathan and Paul Crutzen during the early 1990s, they  discovered the widespread existence of atmospheric brown clouds covering much of the Indian Ocean region. They found that the vast majority of the aerosols were anthropogenic in origin, and that the surface cooling caused by the aerosols is more important than the atmospheric heating. These atmospheric brown clouds may have masked as much as 50% of the surface heating caused by the increase in carbon dioxide, and caused reduced precipitation during the Indian monsoon. 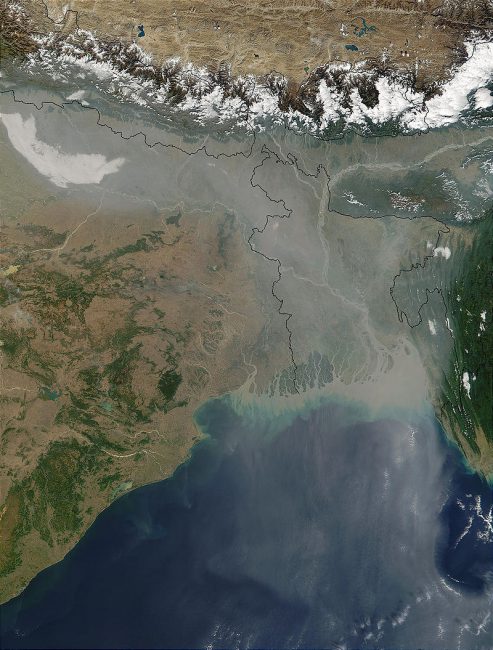 The cloud was also reported by NASA in 2004 and 2007. Although aerosol particles are generally associated with a global cooling effect, recent studies have shown that they can actually have a warming effect in certain regions such as the Himalayas. One major impact is on health. A 2002 study indicated nearly two million people die each year, in India alone, from conditions related to the brown cloud.

In 2017, he and his colleague Yangyang Xu from Texas A&M University redefined the categories of climate change, adding two more (over three degrees warming):

The article was published in the journal Proceedings of the National Academy of Sciences. Xu and Ramanathan calculate a 50 percent probability that global warming will exceed the dangerous threshold within three decades unless greenhouse gas emissions are significantly reduced. They have defined a five percent probability of reaching the catastrophic level. The scientists described a threat scenario as Unknown, in which climate change poses an existential threat to almost all citizens of the earth. It would be so hot at times that billions of people would only be able to survive with the help of air conditioning systems and massive resettlements would be necessary.