You are here: Home › anthropology › The Discovery of the Taung Child 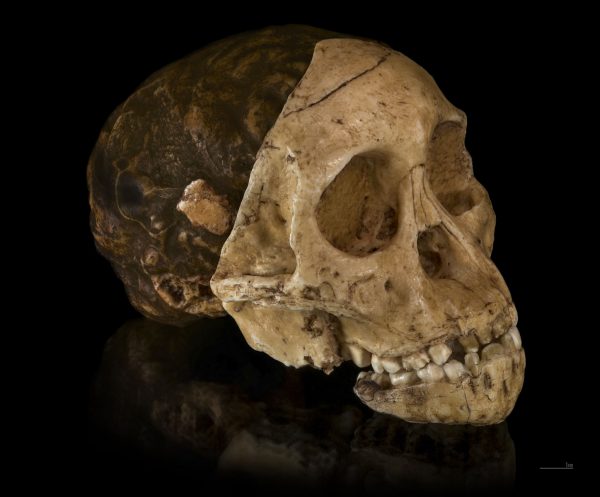 On November 28, 1924, workers at the Buxton Limeworks near Taung, South Africa, showed a fossilised primate skull to Raymond Dart, an Australian anatomist and anthropologist, who described it as a new species in the journal Nature in 1925. The fossil was soon nicknamed the Taung Child and the new species was named Australopithecus africanus – the “southern ape from Africa” – and described by Dart as “an extinct race of apes intermediate between living anthropoids and man”.

“Far from the bones being objective facts to be judged as evidence, there was an established pattern of belief. There was a climate of opinion that favored discoveries made in Asia but not the ‘silly notion’ of small-brained bipeds from Africa”.
– Sherwood Washburn, “Human Evolution After Raymond Dart” (1985)

Already during the early 20th century, workers at limeworks in southern Africa routinely uncovered fossils from the tufa formations they mined. The findings included extinct baboons and other primates. In 1924, workers at the Buxton Limeworks near Taung, South Africa, showed a fossilised primate skull to E. G. Izod who was back then the visiting director of the Northern Lime Company, the managing company of the quarry. Josephine Salmons back then was a student of the anatomist Raymond Dart, at the University of Witwatersrand. Further, Salmons was a friend of the Izod family and during a visit, she noticed the primate skull displayed on the mantle over a fireplace. She showed the ramainings to Dart who asked the company to send any more interesting fossilised skulls that should be unearthed. Dart began to examine further remainings and noticed a fossilised endocast of a skull, showing the impression of a complex brain. He matched it to a fossilised skull of a juvenile primate, which had a shallow face and fairly small teeth.

Around forty days after he first saw the fossil, Dart completed a paper that named the species of Australopithecus africanus – the “southern ape from Africa” – and described it as “an extinct race of apes intermediate between living anthropoids and man”. The paper about the famous Taung Child appeared in a February 1925 issue of the journal Nature. Unfortunately for Dart, it took decades until the scientific community accepted the scientist’s claim that Australopithecus africanus – the species name he had given to the Taung Child – was in the human line of descent.

The turning point in the acceptance of Dart’s analysis of the Taung Child came in 1947, when the prominent British anthropologist Wilfrid Le Gros Clark announced that he supported it. In early January 1947 at the First Pan-African Congress on Prehistory, the Taung Child was called a “hominid”, that is, an early human for the first time.

The Taung Child was originally thought to have been about six years old at death, because of the presence of deciduous teeth, but it is now believed to have been about three or four. Comparison of the Taung Child fossil to the skull of a nine-year-old modern child suggest that A. africanus had a growth rate to adolescence more similar to that of modern apes, like chimpanzees (genus Pan), than to that of modern Homo sapiens. The Taung Child probably was killed by an eagle or other large predatory bird, judging by the similarity of damage to the skull and eye sockets of the Taung Child to that seen in modern primates known to have been killed by eagles.[4]