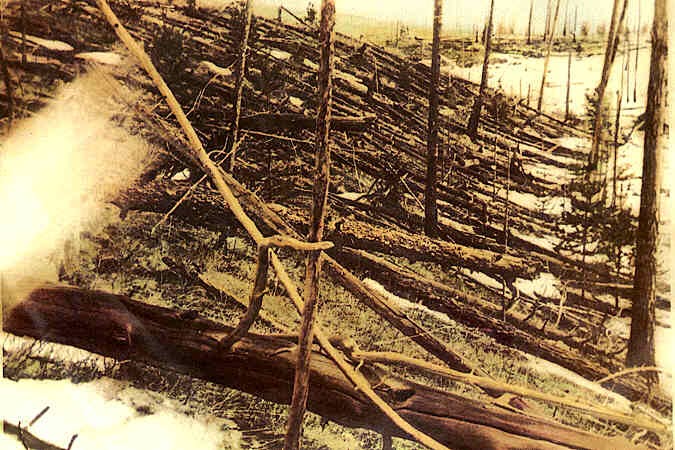 Impact of the Tunguska Event, picture taken in 1929

On June 30, 1908, seismic stations all across Europe registered an enormously powerful shock wave, which originated from a location near the Podkamennaya Tunguska River in what is now Krasnoyarsk Krai, Russia. The so-called Tunguska event ever since has challenged the fantasy of scientists, who related it to the impact of a meteor or comet fragment, or even have developed theories that speak of black holes, anti matter or less exotic geothermical hypotheses.

In the morning of June 30, 1908, inhabitants of the sparsely populated area north west of the famous Lake Baikal noticed a blue light, as bright as the sun making its way quickly across the sky. Just a few minuted after, a crash was heard moving from east to north along with a gigantic shock wave. It knocked down entire woods and crashed windows hundreds of kilometers away, even though an explosion was not seen. The shockwave itself is approximately comparable with an earthquake of 5.0 on the Richter scale and as a consequence of the light passing through high-altitude ice particles, the night sky above Asia and Europe was incredibly illuminated. Some witnesses however, speak about from several up to fourteen explosions in the event. It is reported that the phenomenon lasted for some time, so that also the impression of a trajectory of a bright body was created. During the event, trees were uprooted to a distance of about 30 kilometres and windows and doors were dented in the commercial settlement of Wanawara, 65 kilometres away. Experts estimate that around 60 million trees were uprooted in an area of more than 2000 km². Even at a distance of more than 500 kilometres, a bright glow of fire, a strong vibration, a shock wave and a thundering noise were still perceived, among others by passengers of the Trans-Siberian Railway. The inhabitants of the village of Kirensk, 450 km from the site of the incident, saw a fountain rising, from which the height of the fountain is estimated to be at least 20 km. Due to the sparse population of the area, there are no reliable reports of injuries or deaths.

But it was Hardly Noticed by Science

In all meteorological stations in Europe and North America, seismographs recorded the vibration of the earth’s crust. The pressure wave propagating at the speed of sound reached Irkutsk, 970 km away, in one hour, Potsdam, 5000 km away, in 4 hours, 42 minutes, and Washington, D.C. in 8 hours. The measuring instruments in Potsdam received the signals a second time after 30 hours and 29 minutes, after having circumnavigated the earth once. During the following nights, silver shining clouds of extraordinary brightness appeared over the mid-latitudes of Europe. The transparency of the atmosphere was clouded by the whirled up dust masses. Despite these manifold effects, the event received little attention among scientists, which is probably also due to the communication possibilities of the 20th century, which are still in their infancy. No surprise that the first serious expedition to search for an explanation was sent only 17 years later.

Leonid Kulik, a Russian mineralogist eventually convinced the government to sponsor his trip.  Leonid Kulik collected first information on an expedition in 1921/1922, but only reached Kansk, 600 kilometres away from the explosion site. Only in 1927 a larger expedition of the Soviet Academy of Sciences led by Kulik was able to reach the devastated area. They found an area with a diameter of about 25 km with great devastation. Large, strong, mostly hundred-year-old trees had been uprooted, their treetops pointing away from the place of impact. Kulik’s hypothesis was, that a meteorite impact caused the damage but he was just not able to find a crater and prove his theory. Scientists continued to investigate the area until around 1940. Kulik found the finest rock debris in peat layers covering the swamp, but it was not possible to determine its age or origin more precisely. Molten pieces of quartz had also been removed from the soil, in which nickel-iron compounds were found. The Second World War prevented further search work.

Today’s leading theory considering the cause of the explosion is an air burst of an object passing Earth about 10 kilometers above its surface. Eugene Shoemaker calculated that events like these occur about every 300 years. It was highly discussed, if the event was caused by an asteroid or comet. The comet hypothesis is supported by the glowing of the sky above Europe and Asia and gained lots of acceptance in the 1960’s. in 1983, scientist Zden’k Sekanina published his idea, an asteroid could have been the object they were looking for, which was later supported by further astronomers who noticed that the object presumably came from the asteroid belt. For years, supporters of the asteroid and comet theory battled each other with new findings. Vladimir Alexeev led an expedition on 2010. His team found a crater about which he was able to prove that a gigantic piece of ice caused most damage, which highly supports the comet hypothesis.

The Soviet scientist Andrei Olchowatow favoured a purely geophysical interpretation of the Tunguska event at the end of the 1980’s. He was followed by the German astrophysicist Wolfgang Kundt, who argued that it was a volcanic eruption. According to this, the event could be explained as an explosion of 10 million tons of natural gas that escaped through cracks from an underground natural gas reservoir under high pressure, rose to high atmospheric layers at high speed, ignited by frictional electricity and burned in a flame front down to the point of emission. This would explain the different directions of movement of the bright luminous phenomenon reported by witnesses. Also a slight earthquake and strange atmospheric luminous phenomena observed in the days before the explosion could be related to this. It is also reported that there was unusually bright night sky in Europe and Asia in the days following the event. For example, in London it was possible to read a newspaper in this light.

After more than a Century

After more than one hundred years, there is no reliable explanation for the cause, so there are also a number of exotic hypotheses that have not received scientific recognition. Among other things, the impact of a small black hole, the crash of an extraterrestrial spaceship or an explosion of the numerous mosquitoes found there, comparable to a dust explosion, the “mosquito explosion”, were held responsible for the event.

Expedition Tunguska: A region full of mystery I Special Episode, [9]