You are here: Home › economics › The Burst of the Tulip Bubble 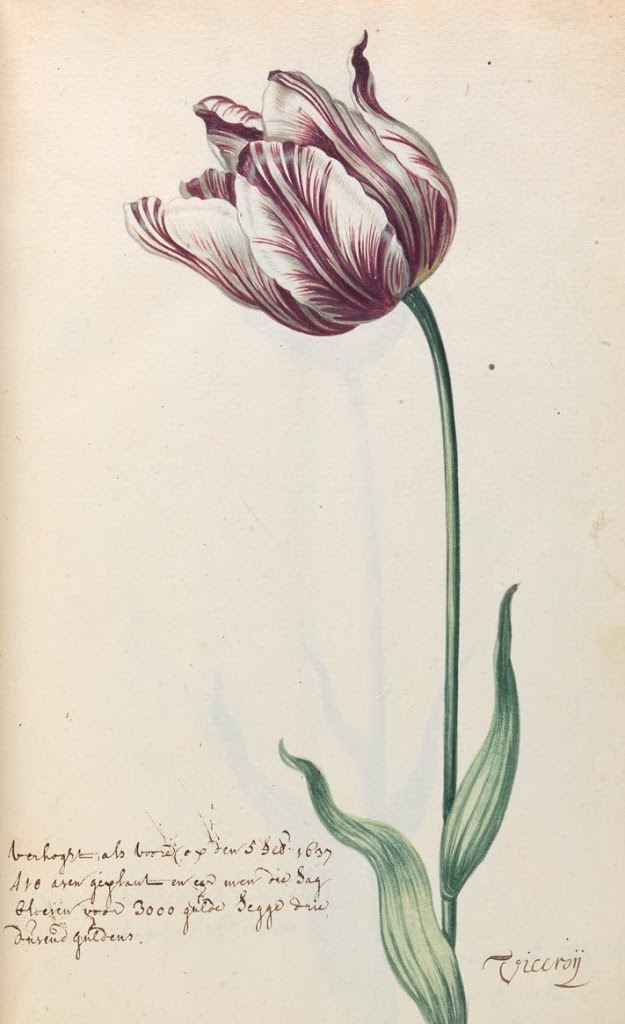 “The Viceroy”, in 1636 worth about 10 times the annual salary of a skilled craftsman.

On February 3, 1637, in Haarlem, Netherlands, the tulip bulb contract prices collapsed abruptly and the trade of tulips ground to a halt. This should put an end to the ‘Tulip Mania‘, one of the first economic bubbles to burst. You see, financial crisis is not an invention of modern times. Already in the 17th century, in the early age of baroque, people went crazy for a good that was short of supply, and the prices went up and up again. But, who does really need tulips? Let’s take a look on how all this did start.

The introduction of the tulip to Europe is usually attributed to Ogier de Busbecq, the ambassador of Ferdinand I, Holy Roman Emperor to the Sultan of Turkey, who sent the first tulip bulbs and seeds to Vienna in 1554 from the Ottoman Empire. Tulip bulbs were soon distributed from Vienna to Augsburg, Antwerp and Amsterdam. Its popularity and cultivation in the United Provinces (the Netherlands) is generally thought to have started in earnest around 1593 after the Flemish botanist Carolus Clusius established the hortus academicus, the oldest botanical garden of the Netherlands at the University of Leiden. He planted his collection of tulip bulbs and found they were able to tolerate the harsher conditions of the Netherlands, and the popularity of the tulips began to grow.

The tulip was different from every other flower known to Europe at that time, with a saturated intense petal color that no other plant possessed. It was also the time of the rise of newly independent Holland’s trade fortunes, which no longer were the Spanish Netherlands. Holland’s economic resources could now be channeled into commerce and the country embarked on its Golden Age. Amsterdam merchants were at the center of the lucrative East Indies trade. This growing new class of wealthy merchants displayed their success, primarily by setting up grand estates surrounded by flower gardens, and the plant that had pride of place was the sensational tulip. As a result, tulips rapidly became a coveted luxury item, and a profusion of varieties followed. The multicolor effects of intricate lines and flame-like streaks on the tulip petals were vivid and spectacular and made the bulbs that produced these even more exotic-looking plants highly sought-after. It is now known that this effect is due to the bulbs being infected with a type of tulip-specific mosaic virus, known as the “Tulip breaking virus“, so called because it “breaks” the one petal color into two or more.

Furthermore, the demand for tulips was greater then the supply, simply because the tulip is grown from a bulb that cannot be produced quickly. It takes 7–12 years to grow a flowering bulb from seed. Bulbs can produce both seeds and two or three bud clones annually, but the “mother bulb” lasts only a few years. Properly cultivated, the “daughter offsets” will become flowering bulbs after one to three years. Tulips bloom in April and May for only about a week. During the plant’s dormant phase from June to September, bulbs can be uprooted and moved about, so actual purchases (in the spot market) occurred during these months. During the rest of the year, florists, or tulip traders, signed contracts before a notary to buy tulips at the end of the season. Thus the Dutch, who developed many of the techniques of modern finance, created a market for tulip bulbs, which were durable goods. As the flowers grew in popularity, professional growers paid higher and higher prices for bulbs with the virus, and prices rose steadily.

By 1636, tulips had become the fourth leading export product of the Netherlands, after gin, herring and cheese. The contract price of rare bulbs continued to rise throughout 1636, but by November, the price of common, “unbroken” bulbs also began to increase, so that soon any tulip bulb could fetch hundreds of guilders. That year the Dutch created a type of formal futures markets where contracts to buy bulbs at the end of the season were bought and sold. The price of tulips skyrocketed because of speculation in tulip futures among people who never saw the bulbs.

The collapse of the Bubble

Tulip mania reached its peak during the winter of 1636–37, when some bulbs were reportedly changing hands ten times in a day. No deliveries were ever made to fulfill any of these contracts, because in February 1637, tulip bulb contract prices collapsed abruptly and the trade of tulips ground to a halt. The collapse began in Haarlem, on February 3, when, for the first time, buyers apparently refused to show up at a routine bulb auction. This may have been because Haarlem was then at the height of an outbreak of bubonic plague. While the existence of the plague may have helped create a culture of fatalistic risk-taking that allowed the speculation to skyrocket in the first place, this outbreak might also have helped to burst the bubble. Tulip traders could no longer find new buyers willing to pay increasingly inflated prices for their bulbs. Some were left holding contracts to purchase tulips at prices now ten times greater than those on the open market, while others found themselves in possession of bulbs now worth a fraction of the price they had paid. Thus, the tulip mania finally ended, with individuals stuck with the bulbs they held at the end of the crash. No court would enforce payment of a contract, since judges regarded the debts as contracted through gambling, and thus not enforceable by law.

The fascination of tulips and the tulip mania also was subject of a novel by Alexandre Dumas, père, published in 1850. There, Dumas tells the fascinating story of a tulip afficionado in the times shortly after the tulip mania and his quest for breeding the legendary black tulip.[3]