You are here: Home › music › Giovanni Palestrina and the Beauty of Polyphony 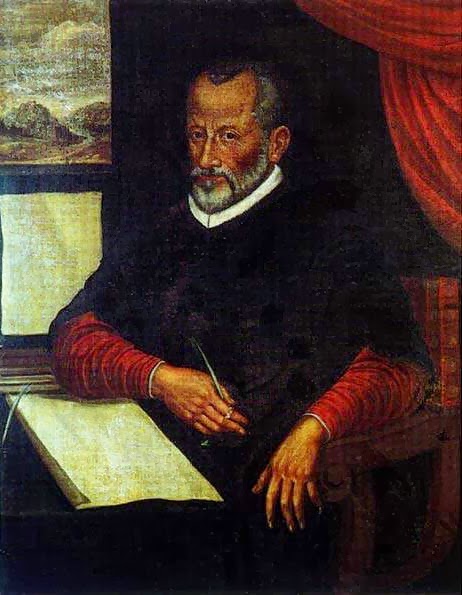 On February 2, 1594, Italian Renaissance composer of sacred music Giovanni Pierluigi da Palestrina passed away. He is the best-known 16th-century representative of the Roman School of musical composition and has had a lasting influence on the development of church music. His work has often been seen as the culmination of Renaissance polyphony.

The Origins of Polyphony

The origins of polyphony are assumed in the European vocal music of the late Medieval Era. The Notre Dame School of Polyphony refers to the group of composers working at the Notre Dame Cathedral in Paris from about 1160 to 1250, along with the music they produced. But, the only composers whose names have been recorded are Léonin and Pérotin, who were mentioned by an anonymous English student. The student provided many information on the style of the music and its composition principles. Pérotin is the first known composer whose four-voice-polyphone music has survived. But polyphony is not just referring to a style of music, it is also a principle of a single human’s relation to something large like the world order by God or an entire nation. The music of polyphony was often seen as a symbol of the Trinity.

In the 16th century, polyphony dominated the Renaissance music, but was often criticized by the church for the lacking comprehensibility of the text. However, it is said that Giovanni Pierluigi da Palestrina saved the style of polyphony from being banned by the church.

The exact date of Palestrina’s birth is not known, although it is assumed around 1525. He grew up near Rome, but never visited the city until being listed as a chorister at the Santa Maria Maggiore basilica. Back then, he was highly influenced by the style of polyphony, which was mostly dominant in northern Europe. Palestrina started publishing his very first compositions in the 1550s and his work was received so well by the Catholic Church, that he was announced director of the Capella Giulia. As successor to Mallapert, Palestrina was appointed magister cantorum on September 1, 1551 without the usual examination procedure at the Cappella Giulia of St. Peter’s Church in Rome, possibly by protection of the bishop of his hometown Giovanni Maria Ciocchi, the later Pope Julius III.

At the beginning of 1555 Giovanni Palestrina was appointed a member of the papal chapel (Sistine Chapel) by order of Julius III, also here without the fixed examinations and without the usual decision of the other singers. The publication of Palestrina’s first madrigal book with four voices fell during this period of service. After the death of Julius III on March 23, 1555, Marcellus II‘s pontificate took only three weeks, but with his humanistic and musically reformed impulses it had a clear influence on Palestrina. The successor Paul IV (1555-1559), in his backward-looking reform zeal, ordered that the members of the Sistine Chapel could only be clerics, so that on 30 July 1555, among others, the three married members, among them Palestrina, were dismissed with a lifelong pension.

The Palestrina Style of Renaissance Music

It is assumed, that Giovanni Palestrina accomplished several hundred compositions including masses, offertories, and motets. But supposedly mostly his masses demonstrate the development of his compositional style. His works are known for their smooth and constant polyphony type. He achieved this by relegating dissonances to the weaker beats in a measure and this was one of the reasons why Palestrina became one of the leaders of European composers. This very dynamic ‘Palestrina style’ is until this day taught in Renaissance music classes. One of the hallmarks of Palestrina’s music is that dissonances are typically relegated to the “weak” beats in a measure. This produced a smoother and more consonant type of polyphony which is now considered to be definitive of late Renaissance music, given Palestrina’s position as Europe’s leading composer

One of his most important works, the Missa Papae Marcelli (Pope Marcellus Mass), has been historically associated with erroneous information involving the Council of Trent. According to this tale (which forms the basis of Hans Pfitzner‘s opera Palestrina), it was composed in order to persuade the Council of Trent that a draconian ban on the polyphonic treatment of text in sacred music (as opposed, that is, to a more directly intelligible homophonic treatment) was unnecessary. However, more recent scholarship shows that this mass was in fact composed before the cardinals convened to discuss the ban (possibly as much as ten years before). Historical data indicates that the Council of Trent, as an official body, never actually banned any church music and failed to make any ruling or official statement on the subject.

In January 1581 Giovanni Palestrina received a benefice at the Church of Santa Maria in Ferentino southeast of Rome. A little later he gave up his intention to enter the priesthood and married on 28 March 1581 the wealthy widow of the papal fur supplier, Virginia Dormoli. As the owner of a fur business, he prudently invested the proceeds in real estate. In this new phase of life Palestrina developed an intensive and comprehensive composition and publication activity. A large number of madrigals and motets appeared in a large number of collected prints, and many important individual prints came out, such as books with masses, motets and madrigals as well as the two collections with five-part sacred madrigals. Among the great cyclic works of his late period are the Song of Songs (1583/1584), the Lamentations (1588), the Magnificat Collection (1591) and the two liturgical annual cycles with hymns (1589) and offertories (1593). In the spring of 1593 he wore himself out with the intention of returning to his homeland in order to take over the vacant position of cathedral conductor and organist there until the regular reoccupation. But even before the signing of the contract Giovanni Pierluigi da Palestrina fell seriously ill at the beginning of 1594 and died on the morning of 2 February.

One of the hallmarks of Giovanni Palestrina’s music is that dissonances are typically relegated to the “weak” beats in a measure. This produced a smoother and more consonant type of polyphony which is now considered to be definitive of late Renaissance music, given Palestrina’s position as Europe’s leading composer (along with Orlande de Lassus) in the wake of Josquin des Prez. The main insight, that the “pure” style of polyphony achieved by Palestrina followed an invariable set of stylistic and combinational requirements, was justified. Fux’s manual was endorsed by his contemporary J.S. Bach, who himself arranged two of Palestrina’s masses for performance.[4] Palestrina was extremely famous in his day, and if anything, his reputation and influence increased after his death. J.S. Bach studied and hand-copied Giovanni Palestrina’s first book of Masses, and in 1742 wrote his own adaption of the Kyrie and Gloria of the Missa sine nomine. Felix Mendelssohn placed him in the pantheon of the greatest musicians, writing,[5]

“I always get upset when some praise only Beethoven, others only Palestrina and still others only Mozart or Bach. All four of them, I say, or none at all.”