You are here: Home › art › Johannes Vermeer – Master of Perspective and Lighting 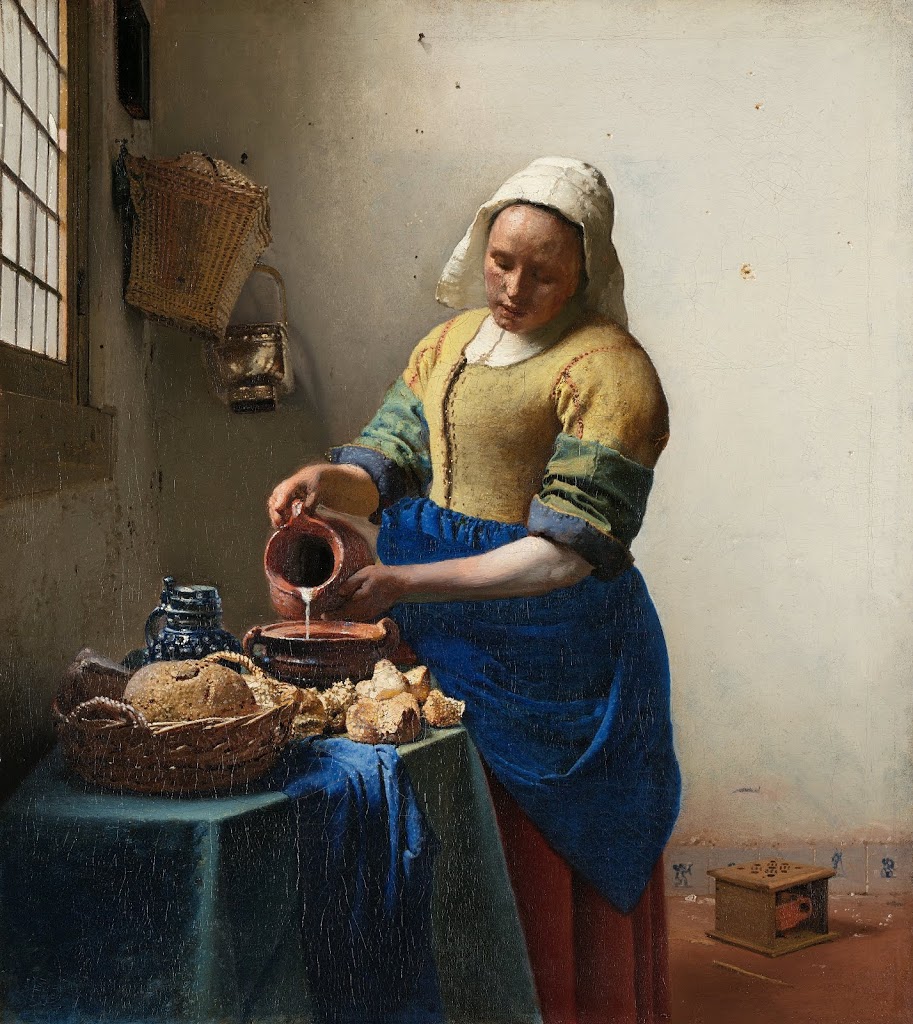 The Milkmaid
by Johannes Vermeer, 1660

On October 31, 1632, Dutch genre painter Johannes Vermeer was born in Delft. Vermeer always worked slowly and with great care, using bright colors and sometimes expensive pigments, with a preference for cornflower blue and yellow. He is particularly renowned for his masterly treatment and use of light in his work.

By art alone we are able to get outside ourselves, to know what another sees of this universe which for him is not ours, the landscapes of which would remain as unknown to us as those of the moon. Thanks to art, instead of seeing one world, our own, we see it multiplied and as many original artists as there are, so many worlds are at our disposal, differing more widely from each other than those which roll round the infinite and which, whether their name be Rembrandt or Vermeer, send us their unique rays many centuries after the hearth from which they emanate is extinguished.

This labour of the artist to discover a means of apprehending beneath matter and experience, beneath words, something different from their appearance, is of an exactly contrary nature to the operation in which pride, passion, intelligence and habit are constantly engaged within us when we spend our lives without self-communion, accumulating as though to hide our true impressions, the terminology for practical ends which we falsely call life.
– Marcel Proust In Search of Lost Time (1913-1927) Vol. VII: The Past Recaptured (1927) Ch. III: “An Afternoon Party at the House of the Princesse de Guermantes”.

Born as the only son to Reijnier Janszoon, Johannes Vermeer learned much about art from his father, who was a silk weaver as well as a member of St. Luke’s Guild, where he traded numerous paintings. There is not much reliable information about Jan Vermeer’s education as a painter. On December 29, 1653 he became a member of the St. Luke Guild as a free master. This admission must have been preceded by a six-year apprenticeship with a painter recognized by the guild. It is believed that Vermeer might have been a pupil of Leonaert Bramer. Although this hypothesis met with little approval due to great differences in style, Vermeer’s connection to him is documented. Furthermore the contact to Gerard ter Borch is documented. It was also assumed that Vermeer was a pupil of Carel Fabritius, who had been trained by Rembrandt. [7] This hypothesis is now doubted by art historians. Instead, Pieter de Hooch, who lived in Delft between 1652 and 1661, was assigned a formative role in Jan Vermeer’s painting, since de Hooch’s style was identified in Vermeer’s genre painting and recognized as refined. 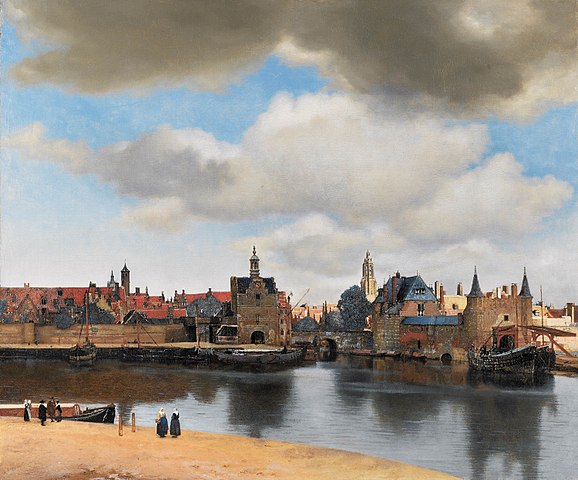 During Vermeer’s busy years, he earned himself a great reputation and his financial situation was in comparison to other painters of his era extraordinary good. He was able to take care of his 11 children and his wife easily, he was even promoted to the dean of St. Luke’s Guild and therefore a man with great influence in the community.

Vermeer was known for his slow painting style, which may have been the cause that he only completed about 35 paintings. Also, his time as an active artist was rather short, due to his sudden and early death at the age of 43, but his pieces can be divided into 3 different periods. In the 1650’s, Vermeer expressed his deep love with the style of the baroque influenced by his time at the gild. Typical for this period was for instance ‘Christ in the House of Martha and Mary‘ of 1655, which depicts a rather modest style in comparison to his later works, but still he did not miss out the strong contrasts in the clothing of the protagonists. 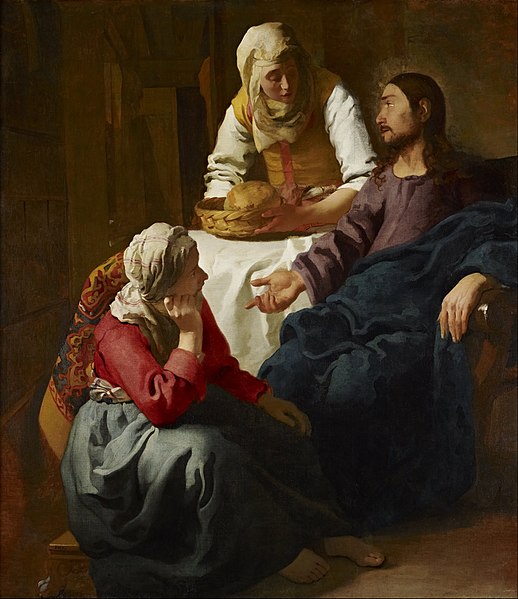 Johannes Vermeer, Christ in the House of Martha and Mary

The period of the 1660’s was Vermeer’s most intense. He developed whole new techniques and used the style of chiaroscuro, meaning that he strongly focused on tone contrasts. Another ‘effect’ he increasingly used in this period was camera obscura. It did not take long until he mastered this new styles perfectly and this is what he is now mainly known and appreciated for. One of his most famous paintings, the ‘Milkmaid‘ resulted from this period

The last working period Vermeer’s is characterized by his recreations of shadows and space like in the painting ‘A Young Woman seated at the Virginals‘. Unfortunately his financial situation became critical in his last five years and at the end of his life, Vermeer ran into dept and also his good health started to fade. In December of 1675, Jan Vermeer suffered from a sudden stroke and passed away.

Jan Vermeer and his work remained unknown to most during his lifetime, as his paintings received little attention beyond a small circle of connoisseurs and lovers. This was due to the fact that only a few of his paintings were sold at auctions. In the 17th and 18th centuries Jan Vermeer was not completely forgotten, but was rarely mentioned in literature. His work was mostly praised. At the beginning of the 19th century, interest in Jan Vermeer grew again, even though hardly any biographical information about him was known. Vermeer’s work was also taken up by artists such as Wybrand Hendriks, who copied Delft’s view and painted genre scenes in Vermeer’s style. In 1821 Christian Josi published an essay entitled Discours sur l’état ancien et moderne des arts dans les Pays-Bas in which he tried to gather all the information about Vermeer and praised his work.

Today, Vermeer’s works are due to their unique style and the few number of paintings very popular on the market and several fake paintings still exist. Vermeer was able to highly influence the art scene and earned himself a great respect in the community. Even Salvador Dalí admired Vermeer’s paintings and stated that his painting ‘The Lacemaker‘ was just as great as the ‘Last Judgement‘ by Michelangelo in the Sistine Chapel.[8,9]