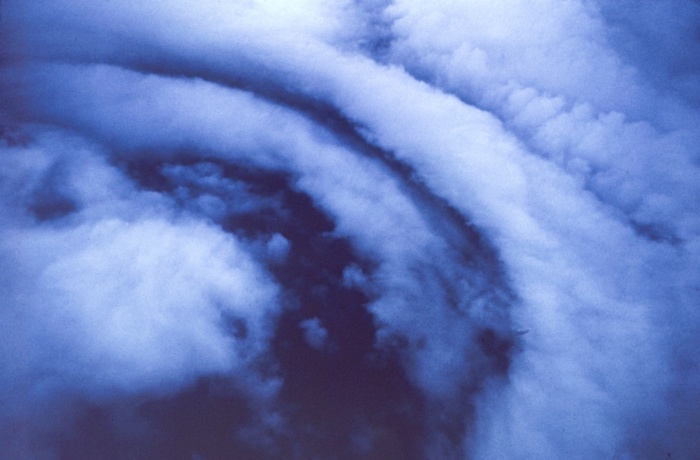 The eye of Hurricane Debbie on August 20

On August 18, 1969, intense and long-lived Hurricane Debbie was seeded with silver iodide as part of a weather modification experiment by Project Stormfury, which resulted in a fall of windspeeds by 31%. The hypothesis was that the silver iodide would cause supercooled water in the storm to freeze, disrupting the inner structure of the hurricane.

Hurricane Debbie formed on August 14 in the southern Atlantic Ocean and made its way to the central Atlantic. Debbie was characterized by numerous fluctuations in intensity, and it reached winds corresponding to Category 3 status on the Saffir–Simpson Hurricane Scale on four separate occasions. On August 22, the Hurricane bypassed the island of Bermuda and brushed southeastern Newfoundland with strong winds.

Project Stormfury was an attempt to weaken tropical cyclones by flying aircraft into them and seeding with silver iodide. The project was run by the United States Government from 1962 to 1983. American chemist and meteorologist Vincent Schaefer and American chemist and physicist Irving Langmuir were the first to attempt cloud seeding. It was hypothesized that by seeding the area around a hurricane’s eyewall with silver iodide, latent heat would be released. As this was expected to promote the formation of a new eyewall, the winds of the tropical cyclone would be weaker due to a reduced pressure gradient. Since the major damage potential of a hurricane increased as the square of the wind speed, a slight lowering of wind speed would have a large reduction in destructiveness.

Schaefer and Langmuir assisted the U.S. military as advisors for Project Cirrus, the first large study of cloud physics and weather modification with the goal to weaken hurricanes. Project Cirrus was a collaboration of the General Electric Corporation, the US Army Signal Corps, the Office of Naval Research, and the US Air Force. The first attempt to modify a hurricane began on October 13, 1947 on a hurricane that was heading west to east and out to sea. After an airplane dropped more than 80 kg of crushed dry ice into the clouds and afterwards, the hurricane changed direction and made landfall near Savannah, Georgia. As a result, the public blamed the seeding, but it was proven that the storm had already begun to turn when seeding began. However, the catastrophy set back the cause of seeding hurricanes for eleven years.

In 1961, the first seeding experiment since the Cirrus disaster was attempted with Hurricane Esther. Eight cylinders of silver iodide were dropped into Esther’s eyewall, and winds were recorded as weakening by 10 percent. The success of the project led to the establishment of Project Stormfury. In the project, there were several guidelines used in selecting which storms to seed: The hurricane had to have a less than 10 percent chance of approaching inhabited land within a day, it had to be within range of the seeding aircraft, and it had to be a fairly intense storm with a well-formed eye.

On August 23, 1963, Hurricane Beulah was the site of a seeding attempt. However, due to its indistinct eyewall and the fact that the seedings of silver iodide were dropped in the wrong places, nothing really happened. One day later, another attempt was made, and the seeders hit their targets. The eyewall was observed to fall apart and be replaced by another eyewall with a larger radius. As the winds fell by 20%, the results were “encouraging but inconclusive.” 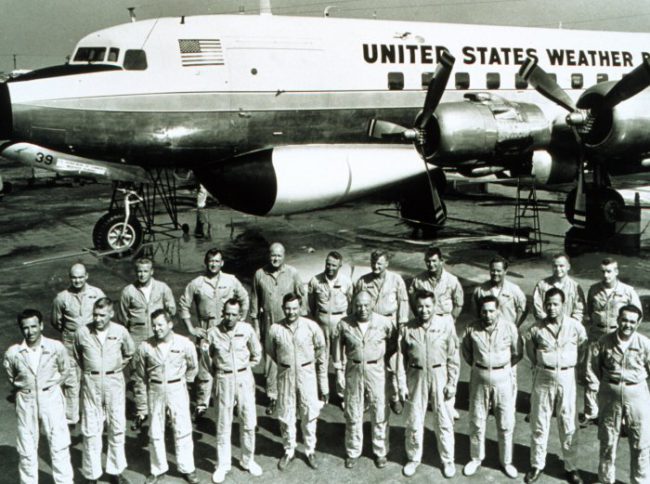 1966 photo of the crew and personnel of Project Stormfury

The Perfect Storm for Seeding

Until 1969, no further attempt was made and in the interim, equipment was improved. Now, gun-like devices mounted on the wings of the airplanes fired silver iodide into the clouds, and observation equipment was also improved. Hurricane Debbie in 1969 provided the best opportunity to test the underpinnings of Project Stormfury. It was probably the perfect storm for seeding as it did not threaten any land, was within the range of seeding aircraft, and had a distinct eye. On August 18 and 20, thirteen planes flew out to the storm to monitor and seed it. On the first day, windspeeds fell by 31% and on the second day, windspeeds fell by 18%. In the end, the results seemed so encouraging that research was to be extended.

However, multiple eyewalls had been detected in very strong hurricanes before, including Typhoon Sarah and Hurricane Donna. It remained controversial whether the seedings caused the secondary eyewalls or whether it was just a natural cycle. Data and observations began to accumulate that debunked Stormfury’s working hypothesis. In August 1980, Hurricane Allen passed through the Atlantic, Caribbean, and Gulf of Mexico. It also underwent changes in the diameter of its eye and developed multiple eyewalls. ll this was consistent with the behavior that would have been expected of Allen had it been seeded. Thus, what Stormfury was accomplishing by seeding was also happening on its own. Those observations called the basis for Project Stormfury into question. In the middle of 1983, Stormfury was finally canceled after the hypothesis guiding its efforts was invalidated.