You are here: Home › history › Somebody, after all, had to make a Start – Sophie Scholl and the White Rose 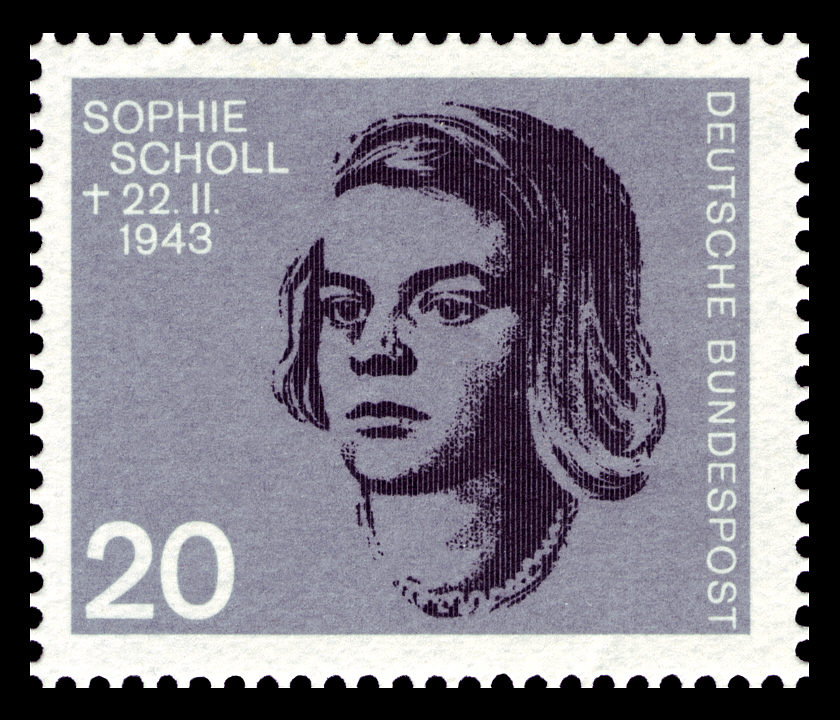 On February 18, 1943, Sophie Scholl and her brother Hans brought a suitcase full of leaflets to the University of Munich, calling for passive resistance against the Nazis, and were arrested. Four days later, Sophie Scholl, her brother Hans and their friend Christoph Probst were found guilty of treason and condemned to death.

“Somebody, after all, had to make a start. What we wrote and said is also believed by many others. They just don’t dare express themselves as we did.”
— Sophie Scholl, Statement to the Volksgerichtshof [People’s Court] of Judge Roland Freisler (21 February 1943).

A Youth in Nazi Germany

Sophie Scholl was born on 9th May, 1921 as the daughter of Robert Scholl, the mayor of the small village Forchtenberg am Kocher. In 1929, however, the U.S. stock market crashed, causing a worldwide economic depression. In Forchtenberg, Robert Scholl was up for re-election, but he lost. Fortunately for the family, he managed to find a job in Stuttgart and later in Ulm, where the Scholl family moved to in 1933, when Sophie like most others of her age joined the Bund Deutscher Mädel (BDM, League of German Girls), a branch of the Hitler Youth. At first she was enthusiastic but, influenced by the views of her father, she became increasingly critical of Adolf Hitler and his Nazi government.

“This Hitler is God’s Scourge on Mankind”

Sophie’s brother, Hans Scholl, was also growing disillusioned with Nazi Germany and in 1937 he even was arrested and briefly jailed after being accused of subversive activities. In spring 1940, Sophie graduated from secondary school and became a kindergarten teacher at the Frobel Institute in Ulm-Soflingen. Next, she attended a six months auxiliary war service as a nursery teacher in Blumberg and in May 1942, she entered the University of Munich as a student of biology and philosophy. Later that year her father was imprisoned for making critical comments about Adolf Hitler to one of his employees. He was found guilty of saying: “this Hitler is God’s scourge on mankind, and if this war doesn’t end soon the Russians will be sitting in Berlin.”

A Strategy of Passive Resistance

Sophie’s brother Hans, who was studying medicine at Munich, introduced her to his friends. Although this group of friends was eventually known for their political views, they were initially drawn together by a shared love of art, music, literature, philosophy and theology. Several members of the group had witnessed Nazi brutality first hand and thus they adopted the strategy of passive resistance and formed the “White Rose” Resistance movement. Until this time, the group had only heard about the cruelty the Jews were suffering, but over the next few months, Hans and his former classmates from university Alexander Schmorell, Willi Graf, and Jürgen Wittenstein saw first hand the horrific treatment they were subjected to. Together, they witnessed the brutal operation of the Schutz Staffel (SS) in the Warsaw Ghetto in Poland as well as the horrors taking place in the Soviet Union.

The Leaflets of the White Rose

When Hans Scholl returned to Germany in October, 1943, he and the White Rose had more than enough information and they began publishing leaflets en masse, going into detail about the murderous mission of the SS. While the leaflets were first sent to addresses simply taken randomly from telephone directories, they wanted to concentrate their efforts on mailing to university lecturers and the owners of bars. Contrary to popular belief, Sophie Scholl was not a co-author of these articles. Her brother had been initially keen to keep her unaware of these activities, but once she discovered them, she joined him and proved very valuable to the group: as a woman, her chances of being randomly stopped by the SS were much smaller.

On 18 February 1943, Sophie Scholl and the rest of the White Rose were arrested for distributing the sixth leaflet at the University of Munich. In the People’s Court before Judge Roland Freisler on 22 February 1943, Sophie Scholl was recorded as saying these words: Somebody, after all, had to make a start. What we wrote and said is also believed by many others. They just don’t dare express themselves as we did.

Today, the square where the central hall of Munich University is located has been named Geschwister-Scholl-Platz after Hans and Sophie Scholl. Many schools, streets and places all over Germany are named in memory of the members of the White Rose. They are considered heroes by the people of Germany, and many young people today look to their example for inspiration.