You are here: Home › engineering › Simon Lake and the Successful Design of the Argonaut 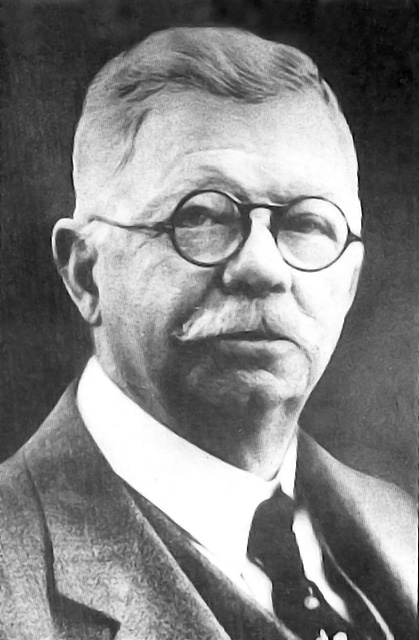 On September 4, 1866, American mechanical engineer and naval architect Simon Lake was born. Lake obtained over two hundred patents for advances in naval design and competed with John Philip Holland to build the first submarines for the United States Navy. His submarine, the Argonaut, was the first to make extensive open-sea operations and to salvage cargo from sunken vessels.

Simon Lake was the grandson of Simon Lake, one of the founders of Atlantic City and Ocean City, New Jersey. Lake and his brothers built the first highway and bridge to Atlantic City and were instrumental in having the first railroads established to both cities. The grandson Simon Lake was educated at the High School of Toms River, New Jersey and later attended the Clinton Liberal Institute, Fort Plain, N.Y. At the Franklin Institute, Philadelphia Simon Lake attended a mechanical course.

It is believed that Simon Lake was highly influenced by the works of Jules Verne,[3] especially Twenty Thousand Leagues Under The Sea which is said to have inspired Lake to design and submit plans to the Navy around 1892. The Argonaut Jr. was the first experimental submarine, built by Simon Lake in 1894 in response to an 1893 request from the US Navy for a submarine torpedo boat. It was first successfully demonstrated at Atlantic Highlands, New Jersey by Sandy Hook.Due to the success, the engineer founded the Lake Submarine Company of New Jersey in 1895. The company’s first built submarine was the Argonaut 1. It became also the first known submarine to be able to operate in the open sea in 1898, and which probably drew a congratulatory telegram from Jules Verne. Lake had sailed the Argonaut 1 from Norfolk, Virginia for a thousand miles to Sandy Hook, New Jersey, arriving in November of 1898. As a result of lessons learned on that journey, he rebuilt it into the 60-foot Argonaut 2. 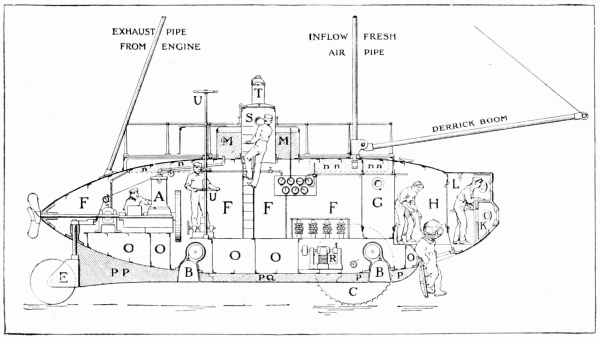 In 1901, The Lake Torpedo Boat Company was formed in New Jersey, which became the main company that built numerous submarines for the United States and foreign countries. Simon Lake served as president and general manager until 1916, and then vice-president and consulting engineer. In 1917, Simon Lake became president of The Housatonic Shipbuilding Company, building vessels for the United States Shipping Board. Lake further served as president of The Merchant Submarine Company and The Lake Heat Engine Company, which has built two very successful experimental heavy oil reversible internal combustion engines (diesel). 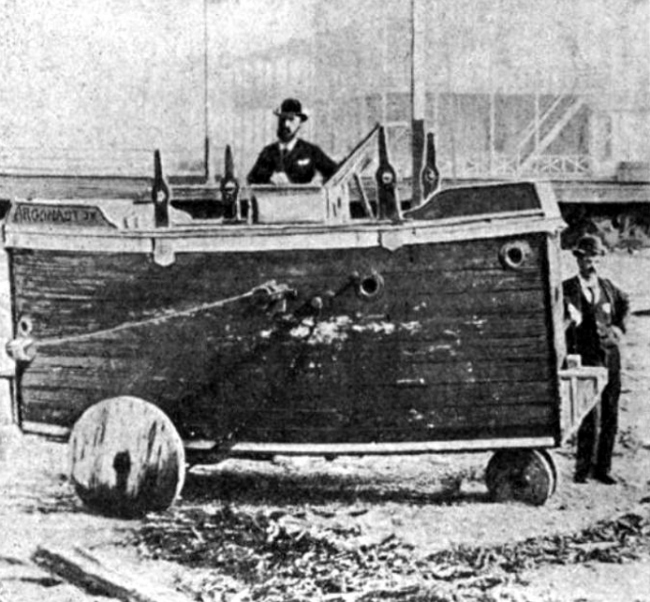 The Argonaut Junior was the first successful submarine built by engineer Simon Lake. She was tapered at both ends, made of wood (Pitch Pine), and had three wheels to keep her from getting stuck to the sea bottom. (c. 1894)

No Success with the U.S. Navy

Neither Argonaut nor Lake’s following submarine, Protector, built in 1901, were accepted by the U.S. Navy. Protector was the first submarine to have diving planes mounted forward of the conning tower and a flat keel. Four diving planes allowed Protector to maintain depth without changing ballast tank levels, and to dive level without a down-angle. Level diving was a feature of several subsequent Lake designs, notably the first three US G-class submarines. Protector also had a lock-out chamber for divers to leave the submarine. Lake, lacking Holland’s financial backing, was unable to continue building submarines in the United States. He sold Protector to Imperial Russia in 1904 as the Osetr and spent the next seven years in Europe designing submarines for the Austro-Hungarian Navy, Germany’s Kaiserliche Marine, and the Imperial Russian Navy (Osetr- and Kaiman-class submarines). 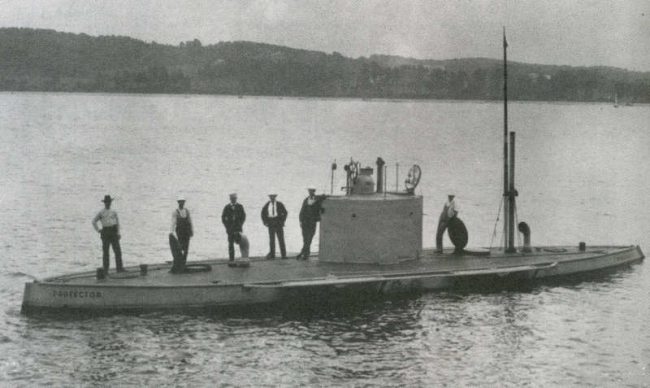 The mechanical engineer and naval architect Simon Lake is credited with the development of groundbreaking submarine technologies for the safe and successful operation of the submarine. These technologies include even-keel hydroplanes, ballast tanks, divers’ compartment, periscope, and the twin-hull design. Simon Lake lived in Milford, Connecticut from 1907 until his death in 1945.  In 1922 the United States and other countries signed treaties limiting the size of their navies. This led to financial difficulties which forced the Lake Torpedo Boat Company to close in the mid-1920s. Following the company’s closure, Lake continued designing maritime salvage systems including obtaining permission to partially salvage the Lusitania off the south Irish coast [6] and then later a failed attempt to salvage gold from HMS Hussar, a British frigate that sank in 1780 in New York City’s East River with his submarine, the Explorer. Lake redesigned the former USS O-12 (SS-73) as the Arctic exploration submarine Nautilus, used by Sir Hubert Wilkins in a 1931 expedition. He also advised the United States Navy on submarine technology and maritime salvage during World War II.